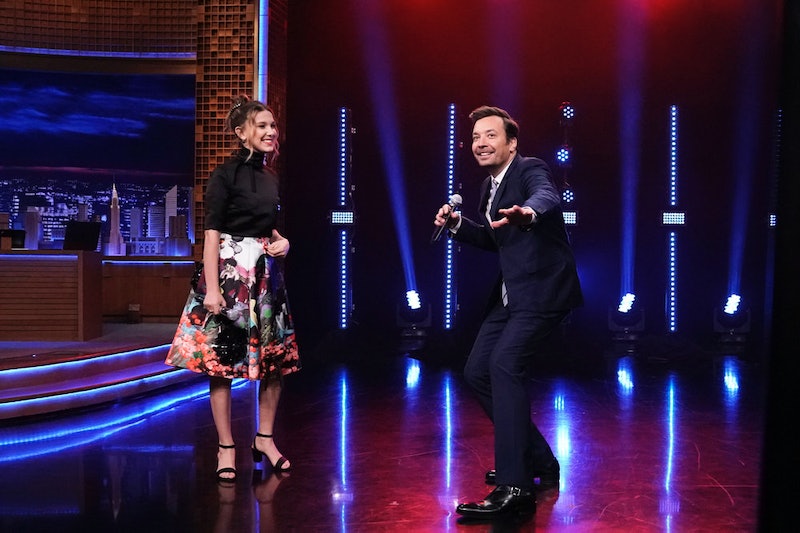 Frankly, everyone should have figured that Millie Bobby Brown was a more knowledgable music aficionado than the rest of us when she effortlessly bodied Nicki Minaj’s famous “Monster” verse without breaking a single sweat back in 2017. But nothing could have prepared fans for what the Stranger Things star just did. Millie Bobby Brown covered Lizzo and Lorde during a recent Tonight Show appearance, and it was epic. The star took part in a “Beat Battle” with host Jimmy Fallon and both of them emerged victorious, resulting in an epic showdown between two unlikely music titans.

The rules of “Beat Battle” are simple: The Roots start playing a beat, and both host and guest trade off singing a different song that fits that beat. The first one who can’t come up with a track to sing loses. The problem (if you consider it one) in this instance was… nobody drew a blank.

The friendly competition started off easy enough, with Fallon belting out a devoted rendition of the Backstreet Boys’ “I Want It That Way” before Brown cut in with Carly Rae Jepsen’s “Call Me Maybe." From there, the tunes didn’t stop as the pair kept delivering hit after hit. Brown easily kept up with the musically inclined late night host, without faltering or stumbling for even one second, and it was nothing short of mind-blowing.

Brown proved to have excellent music taste, covering primarily songs by talented women, including Lizzo’s “Juice,” Lorde’s “Royals,” and Gwen Stefani’s perennial classic “Hollaback Girl,” while sprinkling in some Shawn Mendes and Panic! at the Disco. Fallon, meanwhile, went a little more old-school, pulling out songs from Hall and Oates, Fleetwood Mac, and Kenny Rogers (with a side of Bieber) before the duo broke out in a spirited duet of Wilson Phillips’ “Hold On” to end the battle. Who needs Apple Music when you have human iPods like Brown and Fallon?

And if you still weren’t convinced by her musical savvy, Brown proved that not only does she know many songs, but she knows how to impersonate the artists who sing them as well. The actor did an impression of Amy Winehouse while on Fallon’s show, taking on the late singer’s “You Know I’m No Good”, and it was almost terrifyingly accurate. Her love of Winehouse dates back to her childhood, as displayed when the host showed a throwback video of a 5-year-old Brown singing “Valerie”. "When I was a kid kid, Amy Winehouse was like my thing," she told the host. "Still is!"

Brown was on The Tonight Show to promote her feature film debut in Godzilla: King of the Monsters. It may sound like a natural progression from her starring role on Stranger Things, but making the jump from a Netflix favorite series to a major motion picture was intimidating for the actor, as she explained in an interview with Glamour UK. "On Godzilla; I was so nervous because I haven’t done a film before," she said. "It’s definitely like nothing I have experienced, it’s very different to doing a TV show."

Now that she has one hit show and a blockbuster under her belt, maybe it's time for Brown to turn to music — or maybe just a musical. If her skills on The Tonight Show prove anything, it's that Brown can do anything.