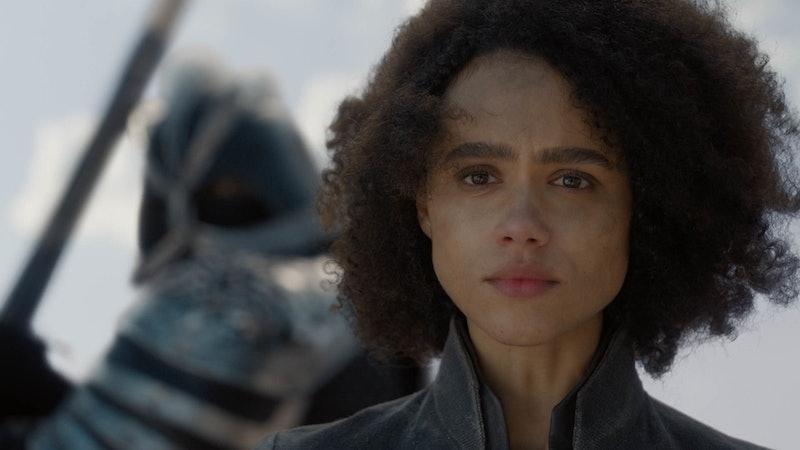 Spoilers ahead for Game of Thrones Season 8, Episode 4. While audiences knew Grey Worm and Missandei likely wouldn't get their happily ever after, that didn't make what happened in the May 5 episode any less horrific. Missandei's death on Game of Thrones was the climactic moment of a fairly tame episode (well, besides that dragon scene), and as always, Cersei was to blame. While out at sea, Daenerys' handmaiden was kidnapped by Euron Greyjoy and taken to the Lannister, who stood her on a ledge on the outer wall of King's Landing.

It's no secret that Cersei is on the war path, and both killing Dany's dragon and capturing her closest friend was meant to send a message. And it certainly works — Rhaegal gets shot down by Euron and plunges into the sea, so Mama Dragon is PISSED by this point. So when the Lannister asks Missandei if she has any last words, she replies, "Dracarys." Fans will recall that this High Valyrian word means "dragonfire," which Dany uses as a command for her dragons to breathe fire. And honestly, if Missandei had to go out, at least she did so with a truly baller final word.

Although Missandei doesn't succeed in summoning any such flames, it's still a powerful statement to make. And when The Mountain swings his sword to chop off her head, you can't help but sense her confidence in both her queen and her mission. While Missandei is a fairly minor character as far as Game of Thrones is concerned, she's well-loved, both on-screen and off. So naturally, fans were displeased that the Naath native was murdered.

But no one was more upset than poor Grey Worm, who'd been dead-set on taking Missandei to the beach once the war was over. It was seriously distressing to watch the flurry of emotions flash across his face: terror, devastation, fury. But while the Unsullied soldier was technically a eunuch, that never stopped them from getting it on, if you know what I mean (and I think you do).

Missandei and Grey Worm had the best relationship in Westeros, and to see the perpetually stoic soldier reacting to his true love being murdered before his eyes was honestly too much for fans to take.

In other words, Cersei certainly hit a nerve this episode, killing two birds with one Euron Greyjoy. Indeed, Dany and Missandei have been inseparable ever since they meet in Astapor in Season 3, and ever since, she's served the Mother of Dragons as an interpreter, confidant, handmaiden, and arguably best friend.

So what is a Dragon Queen to do when Missandei's dying words are to burn this trash capital to the ground? Dany has no choice but to retaliate (they were going to have to face Cersei eventually, anyways), because there's no way she's backing down from this fight. So whatever happens in Game of Thrones Episode 5, Cersei Lannister has awakened the dragon. So pour one out for Missandei — the purest soul in Westeros.