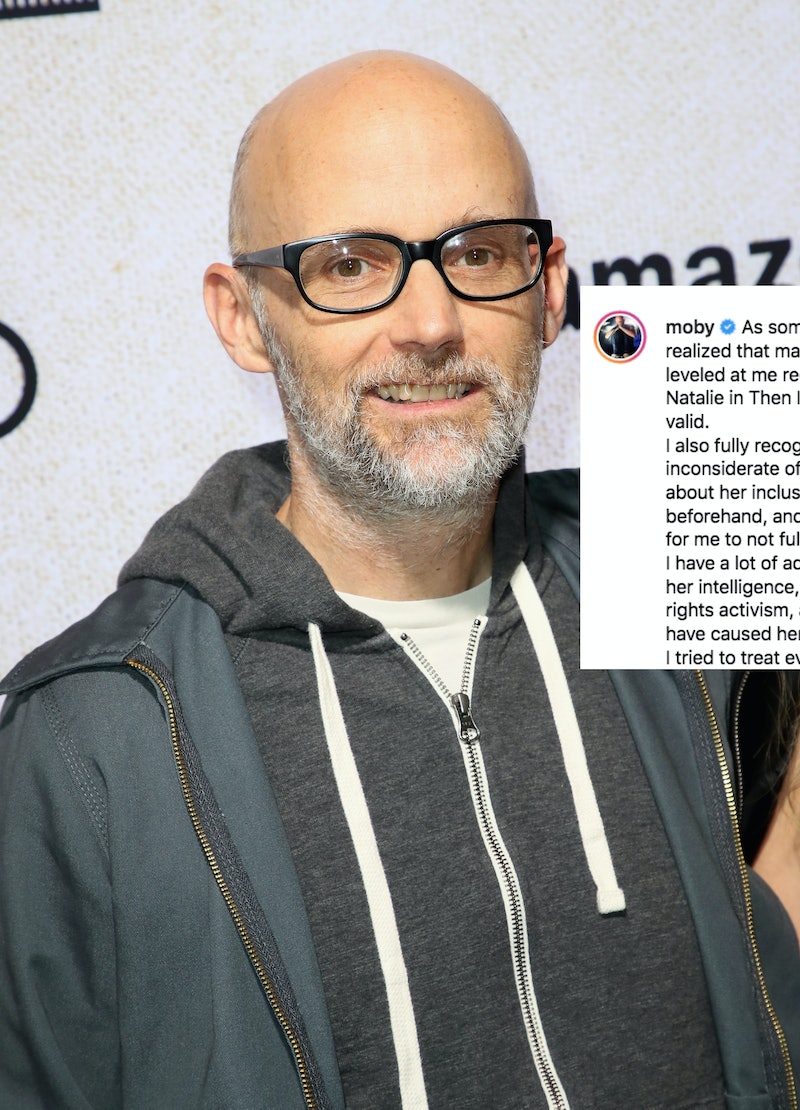 After a lengthy back-and-forth over Moby and Natalie Portman's possible dating history, the latest update might just put an end to any confusion. Over the long weekend, Moby finally apologized to Natalie Portman regarding any conflicting dating claims via Instagram. But that's not the only issue that he addressed in his recent posts.

Even though he previously doubled down on his assertion that he did date Portman (a claim which she refuted, as Harper's Bazaar UK reported), Moby has since apologized for all of the trouble that his original claim — published in his memoir, Then It Fell Apart — has caused. In a lengthy message on Instagram, Moby wrote, in part;

"As some time has passed I've realized that many of the criticisms leveled at me regarding my inclusion of Natalie in Then It Fell Apart are very valid. I also fully recognize that it was truly inconsiderate of me to not let her know about her inclusion in the book beforehand, and equally inconsiderate for me to not fully respect her reaction. I have a lot of admiration for Natalie, for her intelligence, creativity, and animal rights activism, and I hate that I might have caused her and her family distress. I tried to treat everyone I included in Then It Fell Apart with dignity and respect, but nonetheless it was truly inconsiderate for me to not let them know before the book was released. So for that I apologize, to Natalie, as well as the other people I wrote about in Then It Fell Apart without telling them beforehand."

He also acknowledged how their age gap may have created an unfair power dynamic, writing, "Also I accept that given the dynamic of our almost 14 year age difference I absolutely should've acted more responsibly and respectfully when Natalie and I first met almost 20 years ago."

In another post featuring a video, the singer claimed he was "being told to stay silent," but he couldn't help but shine a light on some important causes since he has "the world's attention." Moby stated that the world should be focused on multiple pressing issues, particularly ones regarding the refugee crisis and climate change, instead of anything related to him. Additionally, he wrote,

"i made my apology and i 100% stand by it. i'm simply trying to say that the only home we have is in truly systemic crisis. and rather than use our time, energy, and power to tear each other down, why don't we work to save the only home we have? again, hate me if you want, but i'm an insignificant nothing when compared and contrasted to the problems that we've created."

He certainly makes some worthwhile points, rightly bringing attention to some of the world's most pressing issues. But while these are valid causes to highlight, that does not mean that the matter concerning Moby and Portman's conflicting dating claims is any less important to discuss.

As previously mentioned, this whole discussion was sparked when Moby wrote in his book that he had supposedly met a 20-year-old Portman after one of his shows and that she flirted with him (he was 33 at the time). He wrote, as revealed in an excerpt published in the Sunday Times in April, per NBC News,

“I was a bald binge drinker who lived in an apartment that smelled like mildew and old bricks and Natalie Portman was a beautiful movie star. But here she was in my dressing room, flirting with me.”

He also claimed that they had dated, but that the Black Swan actor was the one to break things off. In an interview with Harper's Bazaar UK, published on May 23, Portman denied that she was romantically involved with Moby, saying,

"I was surprised to hear that he characterized the very short time that I knew him as dating because my recollection is a much older man being creepy with me when I just had graduated high school."

She also added a clarification about her age, stating, "He said I was 20; I definitely wasn’t. I was a teenager. I had just turned 18." The actor continued to explain,

“When we met after the show, he said, ‘let’s be friends.’ He was on tour and I was working, shooting a film, so we only hung out a handful of times before I realized that this was an older man who was interested in me in a way that felt inappropriate.”

To make the matter even more complicated, she claimed that Moby's publisher did not reach out to her to corroborate his description of their relationship.

Following Portman's comments, Moby initially responded to her comments with an odd, and since-deleted, Instagram post in which he revealed a photo of himself shirtless, alongside Portman, as some kind of evidence for their supposedly romantic relationship. In his caption for the post, he wrote that her interview "confused me, as we did, in fact, date." (Bustle previously reached out to Portman's reps for any additional comment on the situation.)

Fortunately, Moby has since changed his tune and apologized to the actor for any "distress" the situation has caused. He even shared an additional apology on Tuesday, hinting he was taking a break from social media. Moby wrote:

"I’m going to go away for awhile. But before I do I want to apologize again, and to say clearly that all of this has been my own fault. I am the one who released the book without showing it to the people I wrote about. I’m the one who posted defensively and arrogantly. I’m the one who behaved inconsiderately and disrespectfully, both in 2019 and in 1999. There is obviously no one else to blame but me. Thank you, and I’m sorry."

Although he's apologized a few times now, he's apparently eager for everyone to move on from this Portman-related discussion, as he's already trying to change the conversation to what he believes are more important topics.

More like this
Every ‘RuPaul’s Secret Celebrity Drag Race’ Contestant’s Identity Has Been Revealed
By Brad Witter
Bella Hadid Will Think Of Her Spray-On Dress From Paris Fashion Week “Forever”
By Brad Witter
Jonathan Bailey’s BTS ‘Bridgerton’ Photos Celebrate 6 Months Of “Kanthony”
By Stephanie Topacio Long
Who Is Nick Cannon Dating & How Many Kids Does He Have?
By Jordyn Tilchen and Radhika Menon
Get Even More From Bustle — Sign Up For The Newsletter