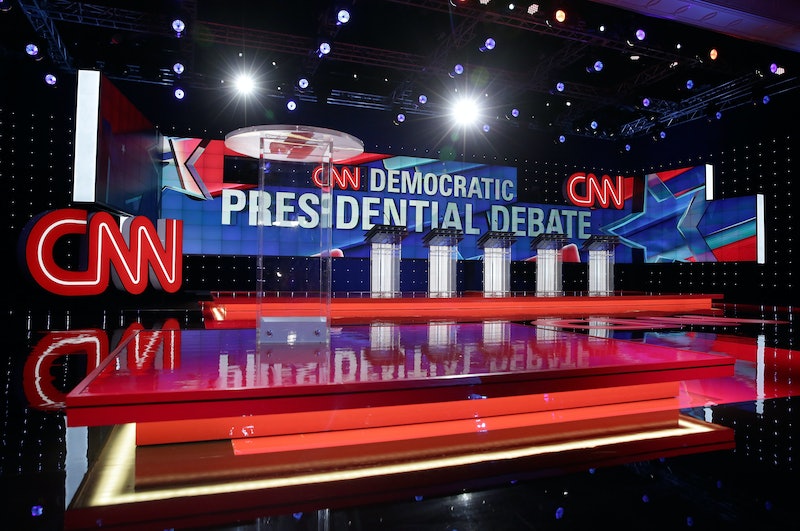 It may seem like the 2016 presidential election was just yesterday, but the 2020 campaign cycle is already here. More Democratic primary debates have been announced, and it's looking like this summer will be very busy, politically speaking.

Last week, NBC News announced that it would be hosting the first Democratic primary debate in Miami, along with MSNBC and Telemundo. That debate is slated to take place on June 26 and June 27, according to NBC News. It, like the other debates, will also stream online for free.

On Tuesday, CNN reported that it would host the second round of Democratic primary debates. Those debates will take place in Detroit, on July 30 and 31, according to the network. The Democratic Party also shared the announcement on its official Twitter account, writing that they were "headed to the Motor City."

The debate date announcement comes as the field of Democratic presidential contenders remains as crowded as ever. At least 15 people have already announced their campaigns thus far, according to a CNN tally. Although there is plenty of speculation and polls are released on a near-daily basis, at this point, there is no clear front-runner. It's entirely possible that no such front-runner will emerge until after several debates have actually taken place.

However, securing a candidate's spot on the debate lineup is not as simple as declaring one's intent to campaign, according to CNN.

In a February statement, the Democratic Party detailed requirements that candidates must meet in order to qualify for a formal debate. One way candidates may qualify is through polling figures. Per the party, this method of qualification requires candidates have at least 1 percent of support in three or more polls. (Those polls, the party said, may be national, or else cover Iowa, New Hampshire, South Carolina, and/or Nevada.)

Tom Perez, the Democratic National Committee chair, said in a statement that the different qualification tiers would give grassroots-backed candidates a shot at qualifying for the national primary debates.

"Because campaigns are won on the strength of their grassroots, we also updated the threshold, giving all types of candidates the opportunity to reach the debate stage and giving small-dollar donors a bigger voice in the primary than ever before," Perez said.

Although the presidential election is still a year and a half away, primary season is in full swing. And, the summer debates will likely be here before you know it.