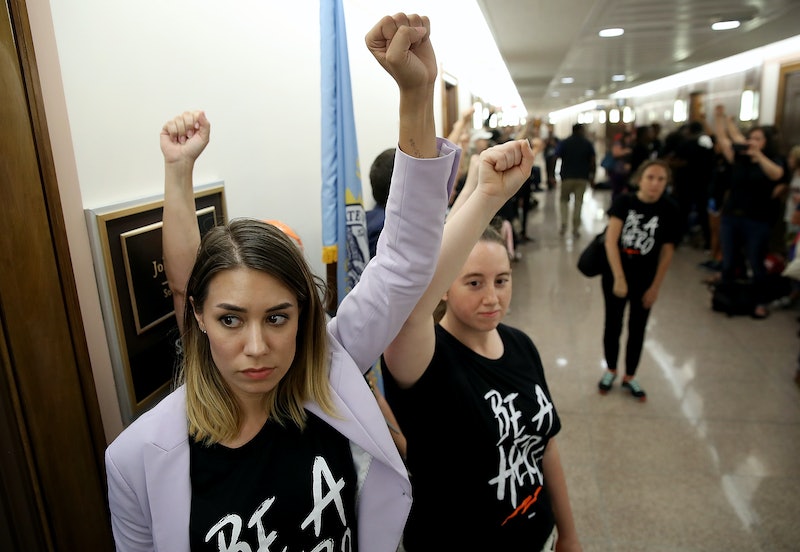 Women from all walks of life have urged the Senate to reevaluate President Donald Trump's Supreme Court pick now that he's been accused of sexual assault. On Tuesday, a group of Mormon women who oppose Brett Kavanaugh's nomination called on the Judiciary Committee's Mormon senators to postpone the confirmation vote scheduled for Friday — just one day after one of Kavanaugh's accusers will testify in an open hearing.

"Sexual assault must not be normalized or condoned in any way or by anyone, especially those charged with political leadership," the nonpartisan group Mormon Women for Ethical Government (MWEG) wrote in a statement this week. "We boldly condemn any attempts to justify such inexcusable and reprehensible behavior and demand that our elected leaders set a morally sound example."

Members of the MWEG ask that the senators "immediately suspend the confirmation proceedings until a thorough independent investigation can be conducted."

Kavanaugh's accusers have both asked for the FBI to investigate their allegations, but Republicans on the Senate Judiciary Committee have dismissed the idea. Instead, Judiciary Committee Chairman Chuck Grassley (R-Iowa) hired a female prosecutor to question Christine Blasey Ford in Thursday's hearing.

"The goal is to de-politicize the process and get to the truth, instead of grandstanding and giving senators an opportunity to launch their presidential campaigns," Grassley said in a statement on Wednesday.

But Ford, Ramirez, and now the MWEG agree that an independent investigation would better shed light on the truth. MWEG’s founder and president Sharlee Mullins Glenn told The Times that doesn't mean her group is taking sides, though.

"Our mutual faith teaches that any sexual abuse or assault in any context is contemptible and worthy of the most severe condemnation," the MWEG wrote in the statement to Mormon senators. "If these accusations are proved false, an investigation will prevent harm to the court’s legitimacy. If they are true, then Judge Kavanaugh must not be confirmed."

The group Republican Women for Progress also came out in opposition to Kavanaugh's nomination this week, writing in a Facebook post that Kavanaugh "no longer meets the high standard expected" of the nation's top justices.

"Anyone nominated for a position as critical as a lifetime seat on the Supreme Court can only assume that position possessing the public's confidence that they are not only eminently qualified professionally, but that they are of unimpeachable character as well," the group wrote in the post on Monday. "The process for evaluating any nominee, therefore, must be thorough and thoughtful."

As of Wednesday morning, the Mormon senators hadn't responded to MWEG's statement or postponed Friday's vote. So as it stands now, the allegations against Kavanaugh won't be investigated outside of the Senate Judiciary Committee.