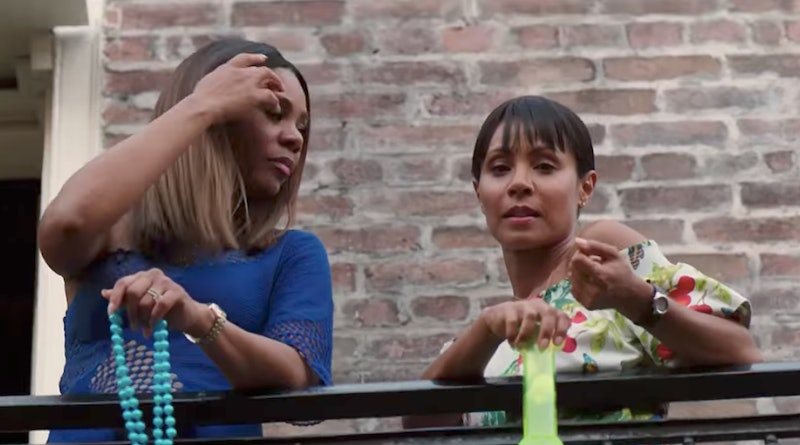 When Girls Trip was released in theaters in July, the film was an immediate surprise hit. Girls Trip exceeded its $20 million budget in its opening weekend alone with an estimated $30.4 million domestically. By August, Girls Trip broke records by not only being the first live action comedy of 2017 to make over $100 million, but also the first movie written, directed, produced, and starring an all-black cast to make that much at the box office. Speaking to me over the phone in two separate interviews, stars Regina Hall and Jada Pinkett Smith weren't just humbled and grateful by the success of the film, which is now available on Blu-ray, DVD, Digital, and On Demand. They want the success of Girls Trip to set a precedence for Hollywood — but, more importantly, for the consumers that support Hollywood.

"Let's be clear about something right here," says Pinkett Smith, when I make the mistake of mentioning how Girls Trip represented black women in a way we don't get to see in the media. "We're always a community of people trying to blame the media for what they give, but, I swear to god, if we didn't turn it on and watch—it wouldn't be made. We have got to take more responsibility, because this industry is about money. We can't put all that responsibility on the media like that. I'm tired of hearing that. I think, as a community, it's time to do some self-reflection or else our situation isn't going to change as fast as we need it to. We need to be far more responsible in regards to what we're consuming."

She certainly has a point. While some analysts predicted the success of the movie early on, they likely couldn't have predicted that the film starring a predominantly black cast would draw in such a crossover audience. Hall and Pinkett Smith reveal that they've seen African-American women, Latina women, Jewish women, and even couples both gay and straight watch the movie — sometimes repeatedly — and then tell them how relatable it was. Not just for the raunchiness of the jokes, but for the close bond between the Flossy Posse. And for the fact that each member of the Posse illustrates a different reality that people face every day. Giving so much to your family that you've forgotten how to live for yourself. Being in a relationship with a cheater. Having a friend betray you and leave you to do anything you can to get by. Even being known as the wild friend that no one ever takes seriously.

"We've felt proud that the audience laughed, that they felt represented," says Hall. "We don't have a million opportunities to be able to show fully developed and humanized characters regardless of the situations that they were in. So, for it to do well financially, was just a bonus." Pinkett Smith reinforces this, pointing out that the commercial success of the film was due not only to its "unapologetic" blackness but also the universality of its story. "A lot of times we feel like we have these isolated experiences that are outside of what is happening with other women. To me, the success of this movie validated for us that our experiences are as universal as anyone else's."

Being able to give this kind of nuanced representation to black women in particular was important to the stars because of the messages we often get from society, not just the media. "We feel like we have to hold onto these ideas of what being a black woman is," says Pinkett Smith. "We already feel... that, being black and female, something's wrong with that. We're constantly being told that's just what's true. But we need to have the strength, even just for ourselves, to break those barriers, to allow ourselves to grow and be all that we are, without feeling that we have to hold some kind of ground just to be seen and heard."

That strength, according to Pinkett Smith, can come in part from supporting each other. "[Black women] are constantly holding together our community. Constantly," she says. But, later in the interview, she adds, "In order to make a change in our place in this world, [all women] have to do that together... Because each woman is every woman... All these prejudices and racism between us that's creating these barriers is ultimately blocking the power that we can create together. Sometimes you will have to break off and go into our communities and do specific work, but sometimes we have to be able to come together on a global level. And we're starting to see, as the world is changing, how much power we can hold."

That power can happen politically, as seen with the global success of the Women's March in January. That power can happen socially, as seen with the many, many women who have stood together against sexual abuse in Hollywood in recent weeks. And that power can also happen recreationally, because, according to an MPAA study from 2014, women still make up the majority of moviegoers. And, in fact, women made up 79 percent of the audience that went to see Girls Trip and propelled it to its record-breaking success. As consumers, we really do hold the power.

But both Hall and Pinkett Smith agree that supporting Girls Trip is not enough. It should only be the beginning. "Ideally, I think what you hope happens is that other people say, 'well, people want to see these stories' and that there's an audience for those stories, whether it's an African-American audience cast or not," says Hall. "And, if there's an audience for it, they'll make more."

"I don't want to name any names, but there were a lot of established black people that didn't believe that this movie could have the success that it had. They didn't believe that this movie would cross over because it starred black women," Pinkett Smith reveals. "And I think that comes from the idea that we just don't have that universal embrace and I think this movie helps dissolve that myth in a big way... I hope that Girls Trip is an entry point that sends a message to Hollywood. That we as women enjoy stories about women and that we as women have proven that our stories are [valid] no matter the skin color."

In the wake of Girls' Trip success, there have been many, many thinkpieces written. Some attribute the success to the audience's love of raunchy comedies; some called it a marketing success that painted Girls Trip as a women-friendly event rather than of Rough Night; and some believe it's a sign that women and minorities are killing it at the box office. But it's clear from talking to Hall and Pinkett Smith that the movie was a perfect storm of things that audiences want to see: women, especially women of color, who are allowed to be funny, nuanced, and complicated as they overcome universal struggles together. So let's turn out for Girls' Trip. Let's turn out for The Hate U Give. Let's turn out for Proud Mary. Because if we as an audience want to see more movies like Girls Trip, then we are the ones with the power — and the money — to make that happen.