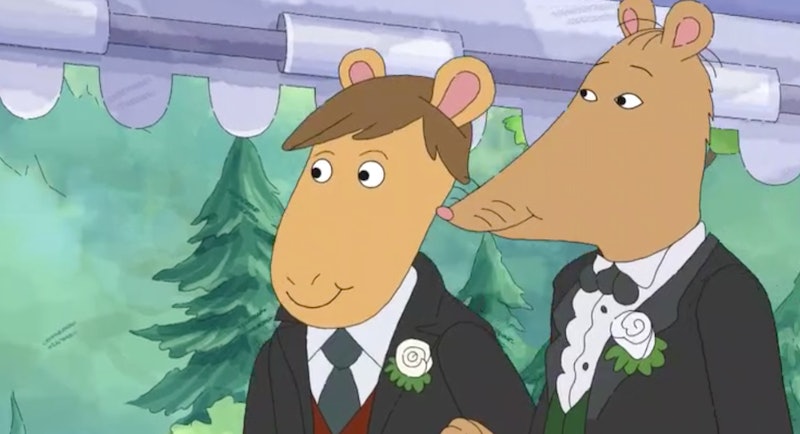 Being that Arthur just kicked off Season 22 on PBS, many of the people who grew up with the show are now adults, and those adults are really excited about something major that happened in the season premiere. As TVLine reported, Mr. Ratburn married a man on Arthur in an episode called "Mr. Ratburn and the Special Someone" that aired on Monday, revealing that the character is gay for the very first time. And so far, fans can't stop tweeting about how awesome this development is.

According to the site, Arthur and his friends can't believe that Mr. Ratburn is engaged, since teachers obviously don't have lives outside of school. At first, they think he's marrying a woman they see him having lunch with (voiced by Jane Lynch) who seems super uptight — but what they don't know is that she's actually Mr. Ratburn's sister.

So they show up to the wedding to stop it from happening, but when they get there, they find out that he's marrying a man instead, and while they do make fun of his dancing, they're very happy for him, because he seems happy. In fact, as soon as they see him walking down the aisle with his husband-to-be, they know their teacher is making the right choice.

Now that the word is out about Mr. Ratburn's marriage, people who grew up watching Arthur have taken to Twitter to share how happy this news makes them.

A lot of people are just happy to celebrate the news (and maybe start watching new episodes of Arthur on a regular basis again):

Others pointed out that this Arthur revelation is way better than anything that Game of Thrones could do, despite the fact that the series finale is about to air.

This tweet pointed out how important it is that the show chose for a main character to be gay, instead of someone who could be written off. It would certainly seem that Mr. Ratburn is here to stay — and he's here to continue being an LGBTQ character on a kids' TV show, which is awesome.

And another tweet highlighted the fact that it was even more important that Arthur chose to show that a character who was an elementary school teacher is gay and in a healthy relationship with a man.

As TVLine also pointed out, this isn't the first time that Arthur has tackled this topic. In 2005, the show's spinoff, Postcards From Buster, featured an episode where Buster visited Vermont and met kids whose moms were lesbians.

Representation is so important, and it's awesome to see a show for kids like Arthur include a gay wedding for a character who's been so central to the show like Mr. Ratburn has. It may have been years since many of us last caught up with Arthur, Buster, and the rest of the gang, but it's nice to know that the kids who watch today get to see episodes like this one.