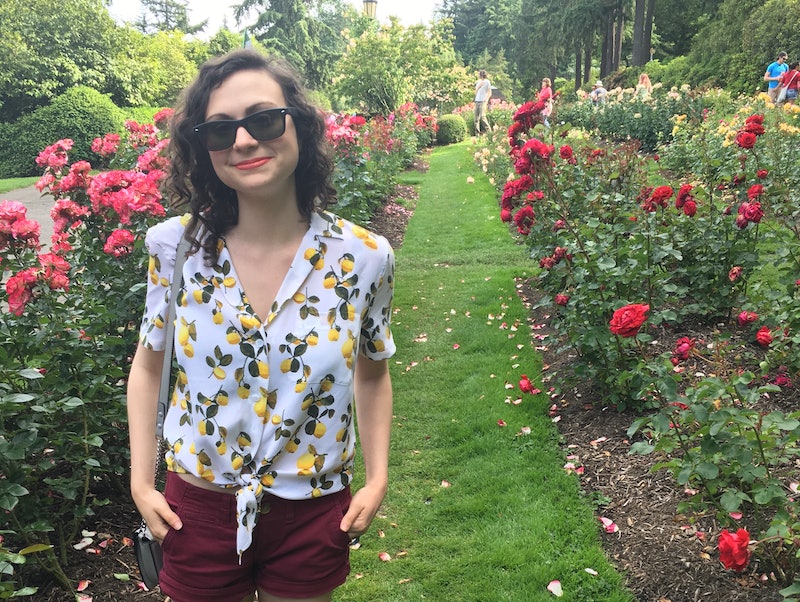 On the surface, my childhood nights were normal: At my scheduled bedtime, I’d brush my teeth, kiss my parents goodnight, and crawl into bed. Surrounded by a small mountain range of stuffed animals, I’d close my eyes and say a few frantic prayers for my family’s safety before settling in to sleep. But then there’d be a sound; a muffled car door slam, or the swell of voices. I'd try to tamp down the worry, but I'd feel it mounting in my chest like a wave that would never crest.

I’d rise from my bed and pad barefooted to the basement, motivated by the double-hinged fear that my mom and step-dad had either left the house or been murdered by the world’s sneakiest intruder. Of course, they were always sitting right where I left them, watching television. Nevertheless, I repeated this compulsion several times each night until I finally tired myself out and fell asleep.

My persistent anxiety over being abandoned, either by choice or by fate, confused even me. I was one of those children showered with praise and attention from all angles. My family made me feel chosen, not just by them but by the world around me. It didn’t make sense that I could feel so insecure. But that’s the thing many people don’t realize about anxiety; it doesn’t necessarily correlate with actual danger. In my case, it's kind of a perverse inheritance; my nerves were bestowed upon me by my grandmother, who cowered from nuns in an orphanage as a young girl, a mother who frets about her health, and a father whose depression helped to imprint a shadowy darkness over my life.

My mom and dad split up when I was three years old. I have no memories of the years we’d all spent together; life for me comes into focus in the months afterward. Mom and I lived alone in the apartment we’d all shared, the upstairs of a house in Bayside, Queens, that our landlord had converted. We enjoyed the top floor all to ourselves; after the divorce, Dad moved into a basement room adjoining our landlord's.

I wasn’t sad about my parents’ separation. They never made sense as a match, and though I loved my dad very much, I understood that he was different from most parents. He was a moody aspiring writer who wore leather jackets in the summer and slathered petroleum jelly on his face because he’d heard it was anti-aging. When I visited him on weekends, we’d watch movies and play computer games before he retreated to work on his manuscript. He spoke to me like an adult, telling me about his problems with girlfriends, his therapy appointments, the medications he took for depression and back pain.

He also told me, almost offhand, that if my mom could leave him, she could also leave me. Though I didn’t believe that on the surface, this internalized fear gnawed at my brain, driving me to push back the covers several times each night to ensure I wasn’t alone.

Sometimes, I feel like my father’s mirror image. I’m a writer, too, and I spend most of my days hunched over a laptop. I probably smell like coffee all the time, like he did when I was growing up, and I, too, have a rigorous skin care routine.

But I am also terribly moody. Some days, getting out of bed is like my personal Everest. My nerves always feel raw — I am hyper and shaky, like I sucked down a gallon of caffeine on an empty stomach (which, to be fair, I probably did). Sometimes, the fear of what could go wrong in a day makes simply standing up from the couch an exercise in resilience. I'm scared of everything and nothing at once — there's just a general, constant churning of worry. When I think about everything I could accomplish if I wasn't terrified of failure or embarrassment, it adds an additional layer of anxiety, like a weighted blanket on a hot day, that makes it even harder for me to check items off my to-do list.

When I’m having a bad day, when the words won’t come easily or I can’t get out of bed, I think about my dad. We never talked about my mental health, only his. I know he shares my struggle, and it's a big part of what led us to eventually become estranged. I cut off contact with him when I was 19, almost by accident. Our conversations were growing increasingly strained since I’d left for college. My leaving home seemed to renew his anger and pain over my parents' separation so many years before, and he'd picked up the familiar thread of criticism lobbed at my mother for leaving. One day, he called and I simply didn’t answer. Then, I kept not answering.

The longer I went without responding to his messages, the more impossible it seemed that I could ever call him back. My anxiety was the first reason I cut off contact with my dad; I worried that he'd be angry with me, so I avoided him. But as time went on, I started to realize that, difficult as the situation was, it was healthy for me to have some space. I'd spent my whole childhood becoming acquainted with his pain, and I never stopped to think about how it was influencing mine.

As soon as we stopped speaking, my mental health reached a breaking point. I fell into the first deep depression of my life. I struggled to wake up and get myself to class on time. I cried for no reason and an already tenuous relationship with food and body image issues blossomed into a debilitating problem. My fear of intruders returned with a vengeance and impacted my sleep. I was back where I started, crawling out of bed in the middle of the night to make sure all was well. I finally began visiting a therapist this year, a small but important step. I don’t have the coping mechanisms to begin to deal with my anxiety and depression just yet, but I’m hoping to build them.

My mental health ties me to my family history in ways I could never have predicted. It’s something I will carry with me regardless of whether I ever see my dad again. I used to fear that I would end up doing what he did, alienating the people I love. But now I see things differently — he’s my motivation to get better. Slowly, I’m learning the past doesn’t have to repeat itself.

Bustle’s ‘Family Thread’ series looks at the many ways our family relationships and our mental health are connected — and how that shapes us.

More like this
5 Crystals For Anxiety
By Megan McCarty
5 Crystals To Manifest Better Sleep
By Megan McCarty
11 Benefits Of Cross-Training
By Carolyn Steber
Plan C Vs. Plan B: What's The Difference?
By Lexi Inks
Get Even More From Bustle — Sign Up For The Newsletter