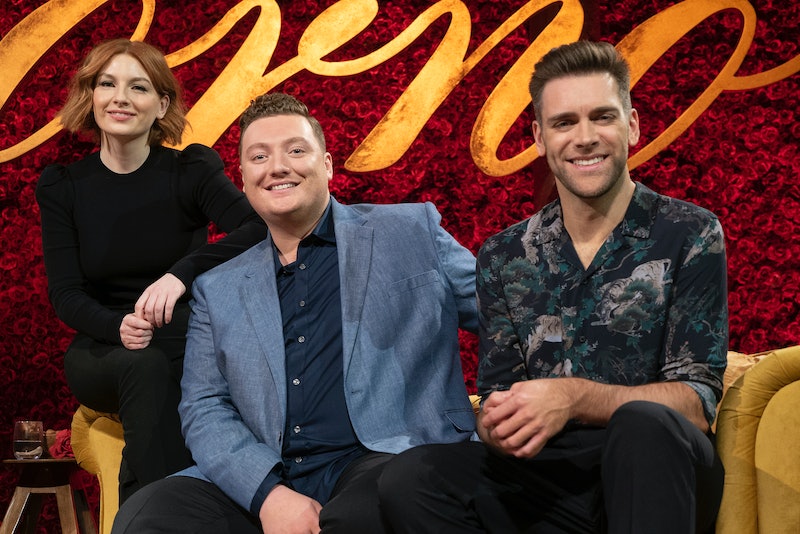 Aimée Grant Cumberbatch: Tell me how the HBO show came about.

Jamie Morton: They came to one of our shows in New York actually. I’m assuming they were invited by someone and didn’t just wander off the street. They got in touch and said that they’d like to do something with us, we weren’t sure what initially and then it kind of snowballed from there.

James Cooper: We didn’t really quite believe it when we first heard they were interested.

AGC: So the HBO ident is pretty famous, how did it feel seeing that on your show for the first time?

JM: It was funny, me and James edited a rough version of the intro video just to have an idea of tone when we were making the show and James was like "we have to find [the ident] from somewhere and put it on because it immediately made it feel like: "Oh my god, HBO!"

Alice Levine: When you look at all the people that have that [makes HBO noise], it’s all the best shows ever. It’s all the shows we’ve loved.

JC: And to be on while Game of Thrones is on is just nuts. We’re surrounded by dragons.

AGC: Well they do have some things in common, dodgy sex scenes for example.

JM: Well we always say that our fan bases are quite similar, not that they’re the same [size] but the people who listen to our show are so invested they come dressed up, it has that convention feel.

JC: This felt like the natural progression, now that Game of Thrones is ending it made sense.

JM: They needed something else and we were just happy to fill that void.

AGC: We know your fans are very dedicated. What’s the encounter that’s really made you realise the show has affected someone’s life in a really profound way?

JC: A couple of people have have had tattoos recently and I feel that’s quite a good sign that you’ve had an impact.

AL: People have used the podcast as their birthing track so the first thing their newborn hears is Rocky’s work.

JM: As it’s leaving a cervix it hears the word cervix. It’s a 360 experience. Someone lost their virginity because of the show. Not to it but because of it. They realised that sex wasn’t scary and could be fun which is a really positive thing that happened. On a more serious note, a lot of people have got in touch about how the show has helped with their mental health, which has been really nice. It’s really resonated in ways we never imagined it would and when people tweet about it in that way, people throw so much support and love towards them. It’s a really nice community that’s been formed online around the show. It does mean quite a lot to some people, which is really nice.

AGC: We’ve had a fourth book and Rocky’s writing more. Are you ever worried, with so much practice, he’s going to actually get good at writing books?

JC: I think he already has a little bit. Especially in the fourth book. Plot has started to develop, I actually want to come and read the next chapter.

AL: There are callbacks to setups which is unbelievable. And for the entirety of book four and series four, people were talking to us like "So you know what? I think that the special one is..." And it’s like "Why are we talking about this?" That's the first time that’s happened properly where people have been following threads. Because so often with Rocky, he’ll kind of lose interest and just either kill someone off or never mention them again, change their name, or just hide them in a cupboard and never let them out again. The fact that he even revisited things is amazing.

JC: The sex hasn’t gotten any better but the plotting has.

JM: Well he’s got such a specific style of writing that it’s kind of his own thing now that even if the story, the way he writes is so consistently crazy that it will always entertain on some level. Whether that’s what he’s going for or not is debatable.

AL: Why do you think he’s the only one that’s mastered it? That hybrid takes quite a writer. He’s at the vanguard.

AGC: Do you ever think he might want to reveal his true identity to fans?

JM: He likes to be involved but only to a certain extent. He wrote these books under a pseudonym because he never wanted himself to be known.

JC: To be blamed.

JM: Yes, "you’ve destroyed literature". What’s been so nice is that people have really respected that. We’re the ones who made the podcast, he just wrote the books and he hid his identity while doing it. He loves it and he likes being on Twitter and stuff, but he does like to be able to switch it off and just be a dad. Particularly because I’ve got three sisters and they don’t want to hear about all this. He is just a normal 60-odd guy with a nice marriage and a family and I think it would be weird to want all of that stuff.

AGC: What aspects of your life have been forever changed by the show?

JM: Pomegranates is a big one because they’re everywhere now, they’re sprinkled on every single salad you can buy.

AL: And also what happened in your hallway at home.

JM: My mum doesn’t listen to the show or read the books and my dad offered to redecorate the hallway. He chose some really nice Laura Ashley or William Morris high-end wallpaper that’s just covered in pomegranates. She loved it. Mum didn’t realise until about five months in when someone came round and said, "I can’t believe you’ve let him put that up." It was a noisy house for about an hour afterwards.

JC: Still up to this day.

AL: It’s ruined a few foodstuffs for us. Like turkey sandwiches I probably couldn’t enjoy in the same way, or blue cheese fish mousse, but I’ve never indulged in that anyway.

JC: Because it’s not a thing.

AL: I couldn’t go to a garden maze now, not even in a nice National Trust property. I would find it hard.

JM: If I ever go to the O2 I’m like, Belinda conquered this place. It’s a lot to live up to.

AL: I think so. We were all quite prudish when it started and I don’t think we particularly talked about sex first person that much and by default you end up doing that.

JC: It’s taught me a lot, about cervixes [and] vaginas in general.

AL: It’s still not for James. He’s not interested.

JC: If anything it’s made it worse.

JM: It’s not the best thing to read if you were wanting to explore that side.

JC: I’m happy in my lane. I’ll just stick with what I like.

JC: In the early days Jamie at points said, "I don’t know if I can do this. It’s a lot." But now it’s just second nature.

JM: It is and it isn’t. You guys think it’s second nature, I’ve just got better at masking it.

AL: There’s moments at home where it’s like a family business and your mum has to say "Don’t talk shop."

AGC: So you’ve had some pretty amazing guests on your Footnotes podcast, are there any other dream people you’d like to see on there?

AL: It’s a rarity in that it’s not a podcast where people come on to promote anything. In my job I interview people quite a lot, and they’re always like "Yeah, good question. Film’s out on the 30th.” And because there’s none of that it’s a really unusual experience and you have to wait for them as pervs to come out of the woodwork, to show themselves.

AGC: Who has been the most surprising one?

AL: We found it surprising that Daisy Ridley just turned up with two bottles of wine and was just like "let’s do this." We were surprised because Star Wars, but also because she was like: "No one knows I’m here haha." And we were like, "Oh god."

AL: We went round to hers which we don’t usually do, they usually come to us. But when Dame Em says "come round to mine," you do.

AGC: Cooked up a storm for you as well.

JC: I felt like we’d won a competition, win a night at Emma Thompson’s, free dinner.

JM: Because we’d all been such massive fans of her for long that was a real "wow".