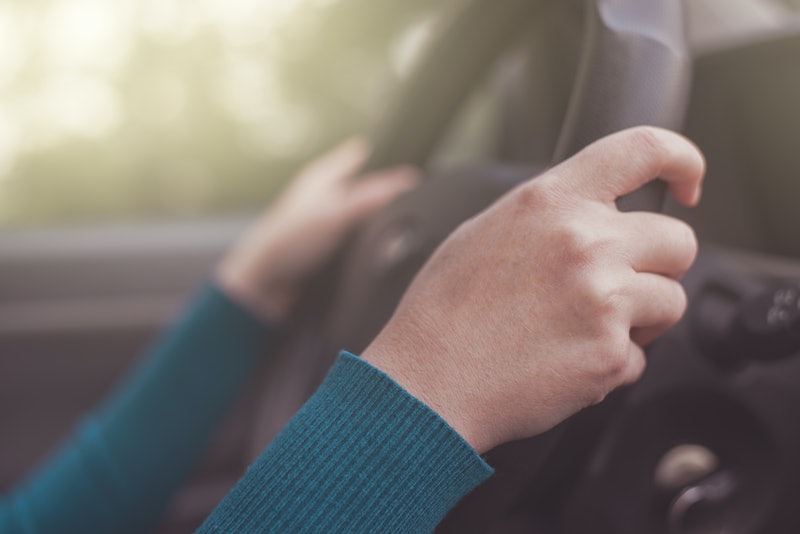 I am a terrible driver. Not in the sense that I’m reckless, driving 85 in a 55 with insatiable road rage. I actually drive like a grandma. I go 45 mph on the highway. I’m not a poor driver because I don’t know what I’m doing, I’m a poor driver because every time I step behind the wheel I’m riddled with anxiety and an overarching feeling of dread. I always think we are going to die.

Merging is my worst nightmare. I will avoid merging at all costs. This makes getting on aforementioned highways rather difficult. I’ve even upsold my bad eyesight to avoid driving, “Oh, I don’t have great night vision. You should drive.”

But, the more and more time I spend at my parent’s country home in Woodstock, Illinois, the more I’m expected to drive. It’s either that, or I’m marooned in horse country with nothing to do but peruse corn fields and lie on a lazy boy chair. After a week, it can be stifling.

As I’ve had time to ponder both my abhorrent vehicular skills while in this therapeutic setting (I’m freelance now, which makes extended stays much easier), and as my career focuses on heavily on commentary centered the place of women in this world and the toxic, culturally ingrained ideas pertaining to womanhood that need a drastic overhaul, I’ve come to focus on my fear of driving with particular scrutiny.

The men in my family are wonderful, supportive beings and I would never call them intentionally sexist. Nevertheless, I have grown up immersed in adage that has been anything but encouraging when it comes to vehicular transport.

The old saying, “women can’t drive” has been pounded into my head since I was younger. I had assumed, from the very onset of life that driving was both my pathway to parental freedom (we all dream of our sixteenth birthday) and also something I was sure to suck at.

I really have to wonder here: Is my deeply ingrained fear of driving rooted in sexism and misogynistic thinking that may have warped my entire worldview on what I’m capable of doing? Is my inability to relax behind the wheel due to years and years of being told my sex was inept behind the wheel? Wow. That’s heavy.

Now, don’t get me wrong. I am a strong-ass woman. But, that doesn’t mean that I haven’t been altered and morphed by the things I was told as a child. Children are very malleable and impressionable, they absorb information like a sponge and it influences who they becomes as adults whether they like it or not.

“We are all programmed by our social and family messages to perceive reality in certain ways," Dr. Jennifer Freed, a family behavioral specialist, tells Bustle. "When we are consistently fed stereotypic narratives we begin to adhere to these and create behavior patterns to match the stories we have been sold. It takes tremendous and active resistance to overcome persistent negative beliefs that have been mainlined into our psyches.”

As Dr. Freed says, pulling yourself out of these ingrained ways of thinking is not easy. First of all, it takes recognition that you’ve been negatively influenced in the first place. Next, it requires an active worldview and self-reliance to reprogram your brain and unlearn these false teachings.

Unfortunately, It Is Women Who Bare The Brunt Of These Feelings

When you’re a woman, or any person in a historically disadvantaged group, you have the odds stacked against you.

You are automatically bundled into groups that might not necessarily be true, “I have anxieties around reputation risk that I don't think men worry about the way women do," Polly Rodriguez, founder of the women’s sexual wellness brand, Unbound, tells Bustle. "Specifically with regards to the ‘work hard, play hard’ mentality. If a woman goes out with the team, client, or investor — celebratory or otherwise — there's more scrutiny on her as a person than there are for men. Men wear hangovers like a badge of honor, women either abstain or keep mum.”

While all of our stories are different, and the pressures we feel vary, all of us have been exposed to some preconceived notion that we’ve had to actively work against.

How To Do That Work To Escape The Social Bondage

I’m not exactly sure where I go from here. I’ve spent my entire life (a decade of which as a licensed driver) indoctrinated into the thinking that I was a miserable, no good driver. These days, I really am a bad driver. My family and partner remind me regularly of this with comments like, “Don’t let Gigi drive. We’ll all die!”

Not exactly encouraging. "The only way I believe any oppressed group can unlearn their compliance with negative beliefs about themselves is through vigorous education about the nature of their oppression and to gather in groups of others who share their struggles and learn together how to lift the ceiling off the old messages,” Dr. Freed says.

Basically, in order to reclaim our identities as the badass bitches we are, we need to shake of these old BS ideas about what women can and cannot do. We need to teach our daughters to stand the hell up for themselves and show that they’re as competent (and often more so) than their male counterparts.

“Societal change has to come from the bottom and top," Rodriguez says. "I believe it's women AND men creating communities and having conversations on a grassroots level coupled with companies and institutions looking themselves in the mirror and saying "ya, we can probably do better." It takes all of us holding each other accountable to a higher standard.”

Additionally, we need to teach our male children not to reinforce stereotypes that are damaging to another child’s self-esteem. If we, Gen Y, can collectively teach our children new ways of thinking, ideas absent of misogynistic and pseudo-scientific stereotyping, we’ll wind up with a generation of much stronger and capable adults.

Personally, the next time I go to the boonies of Illinois and spend a few weeks with my family, I’m going to work to conquer this fear. I know there is no reason for me to be so terrified and nervous while I’m behind the wheel. I’ve never even been in an accident. Here’s hoping it all turns out well. I believe in myself.