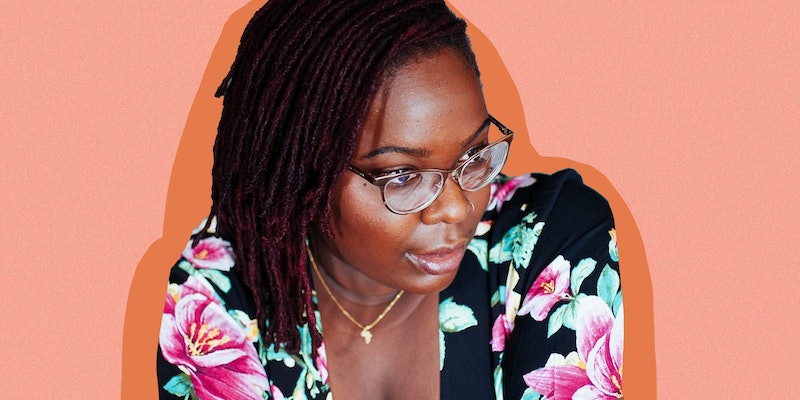 "Is that what you’re wearing?" my mother asked me flatly.

Her words cut fast and deep. She was clearly unimpressed by the form fitting sweater dress I had on that showed off my recent weight gain. I had been sure it would be a hit, but her up-and-down gaze said otherwise.

It was a deep hunter green, slid slightly off-the-shoulder, and was just festive enough for Christmas dinner, I thought. Since it was especially cold out that night, I decided to pair the frock with some black leggings, but she hated those as well. We were going to see extended family, after all, and she wanted me to look "presentable."

The task of dressing as a plus-size woman is bad enough for the other 11 months of the year, especially when you’re strapped for cash and don't have an hourglass shape. But choosing an outfit that successfully hits the comfort, decency, and holiday dinner chic marks proved to be its own tinselled beast.

I was always tall and fairly slender as a kid, but puberty — and the comfort food-powered depression that came along with it — changed that. Because of this, dressing for the holidays proved tricky to navigate, always making me think twice about what I wore. So I gravitated towards dark colors, and still often do, avoiding reds, and most jewel tones, while also pretending that satin, polyester, and velvet don’t exist. My thought process was always about finding clothes that brought the least amount of visual attention to my body — to blend in, to disappear.

"You don't have dress pants?" my mother quizzed, grimacing at my ensemble for the evening. I did, but I was trying to stay firmly between looking cute and being comfortable. "I know you do. And a cardigan, maybe?" She suggested I wear one over my dress, surely to cover my squishy midsection.

Like many, I was impressionable in my 20s when she said these things, and the judgement packed into these questions along with the side comments had a special way of sticking.

Having struggled with her own size for most of her life, my mother saw striking similarities between the two of us. Her ideas about weight, and the words that can be levelled against you because of it, passed from her psyche to mine. "We’re tall, we’re not meant to have all these extra pounds," I recall her telling me often.

However, mainly to address some common middle-age health concerns, my mother had been intermittently committed to eating clean by the time I was around 20, and had more and more clothes that draped on her as she continued to lose weight.

"This doesn’t fit me anymore," she said that evening, as she offered up several finds from her closet that no longer suited her newer, svelte frame. But our styles were nowhere near similar, so she was only growing more and more frustrated at my dismissal of all her choices for me.

I ended up dressed primarily in items from my mother’s closet.

For the dinner that night, she showed me some leopard print pieces, her own dress pants with a non-elastic waist, and a mysterious jersey knit blazer. Meanwhile, all I could think was, "Pass, pass, pass."

"Just wear this please!" she said as she handed me a dreary gray and somewhat reversible cardigan — the ones that didn’t have a clearly defined collar or bottom. It wasn’t a favorite of mine, but it would do. Though I was 22, and more than capable of dressing myself, the conversation with my mother already put a damper on my own excitement about my chosen outfit. And in the end, like many holiday dinners before and after, I ended up wearing primarily all items from my mother’s closet — dress pants included.

Since food is one of its biggest components of the holidays for my family, that meant every year I had to zero in on the comfort part of the equation without relegating myself to sweatpants; anticipating the night’s indulgences while still looking presentable by the end of it all. But even that kind of pre-planning never seemed to be enough for my mother.

"Don’t you think you should have a salad, too?" she asked once we were at the dinner table, inquiring about my plate loaded with all of my Jamaican favorites: Rice and peas, curry chicken, stew beef, oxtail, roast corn, and the works. I’d planned ahead for the carb-filled goodness I was seconds away from partaking in, which was why the uninhibited stretch of the leggings — that I begrudgingly swapped out for dress pants at my mother’s insistence — had been essential.

For the remainder of night I was, as expected, uncomfortable and self-conscious. I writhed as the dress pants my mom forced me to put on cut into my sides. I was frustrated, but more than anything, I was disappointed in myself for worrying about everyone else's thoughts rather than my own well-being.

That Christmas was far from the last time my weight was a pre-dinner talking point between my mother and I, but it marked the beginning of the end of me listening to the many faulty rules I'd let govern my closet and ultimately, my body for far too long.

It’s always a long and difficult process to unlearn the things you’ve been conditioned to believe, particularly about yourself. But plus-size bloggers and designers like Gabrielle Gregg and Sashagai Ruddock have helped me find my way back to wearing bright hues, bold patterns, and silhouettes I previously deemed as a no-go for women my size. After finding Gregg's blog, then called Young, Fat & Fabolous, in my early 20s, I would later come across Ruddock thanks to Instagram and mutual friends. The digital presence of plus-size women breaking the rigid style rules I'd been so bound by was freeing, and helped me hold the mirror up to myself and discover my own beauty.

While Gregg has shown me that everything from crop tops to horizontal stripes can work for anyone, Ruddock has spoken at length on social media about setting hard limits on the ways those closest to you are allowed to talk to you about your body — which can be a hard thing to relay to family who make comments under the guise of wanting what’s best for you.

As for my mother and I, our fashion tastes continue to differ. But as I edge closer to 30, I've learned to set boundaries with her. This year, after she shared her unsolicited weight loss advice — for what felt like the millionth time — I finally had the uncomfortable but fruitful conversation about what I would no longer accept. "We don't share a body," I told her. "I'm dealing with my weight in my own way, so just let me do that." She fell silent after, but the look on her face let me know she was receptive to what I had to say — and she hasn't brought up my weight since.

I've come a long way since those Christmas dinners, but I still don’t have a perfect relationship with my own body. These upcoming holidays will bring along its own set of challenges in terms of what I’ll wear, but I must say, my confidence is far better than I could have ever imagined back in my early 20s.

And this year, whatever look I choose will be 100 percent me.

More like this
Androgynous Formal Wear That Will Make You Feel *So* Fancy
By Megan Lasher
The 12 Best Strapless Bras That Won’t Slip & Fall Down
By Audrey Williams and BDG Commerce
An Honest Review of MeUndies Boxers, According To A Non-Binary Person
By Megan Lasher
9 Tips For Hosting A Holiday Party In A Small Apartment
By Anna Davies
Get Even More From Bustle — Sign Up For The Newsletter