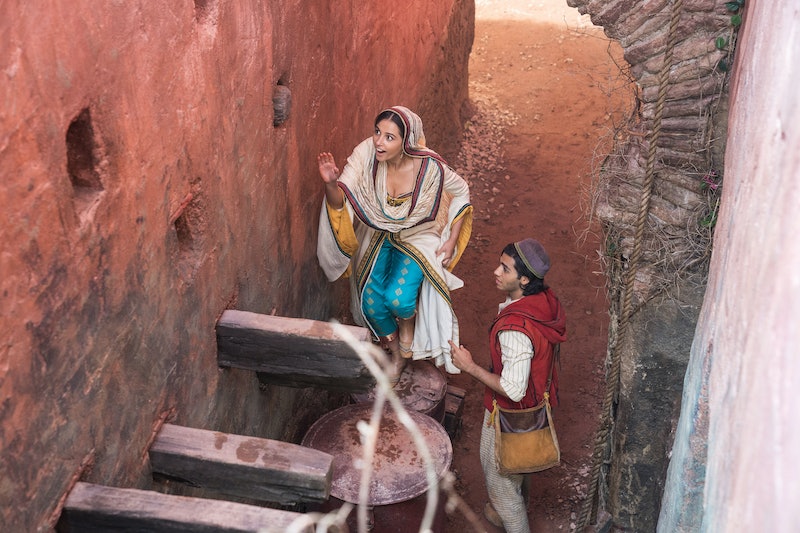 There's a moment in the new live-action Aladdin when the magic carpet careens through the sky for "A Whole New World" and Naomi Scott's Jasmine nudges Mena Massoud's Aladdin out of the way, grabs the tassels on the corner of the mat, and starts driving the thing herself. It's a smart move. For those of us of a certain generation, who grew up singing along to the OG film on the rug in their lounge (in my household, my big sister was Jasmine, I was Aladdin, and my little sister, in the eternal scourge of the youngest sibling, was Abu), this was the moment we were waiting for.

I was intrigued how they'd make it work, given the fact "A Whole New World"s lyrics are a little bit light on the female agency side of things.

"That was actually really specific, [and] I wanted to do it," Scott tells me and a group of six influencers who joined her for tea and pastries in early May. "When she gets out the palace, she wants to explore. She's not scared of things." The fearlessness and agency of Jasmine 2.0 is surely one of the most exciting features of the film. This is a woman who goes in and asks her father for the top job, listing her skills and accomplishments. For a generation previously benchmarked against fairytale-esque virtues of the "nice, modest girl," this is like a jet blast of fresh air.

"My girl knows what she's doing, she's a politician," Scott explains, noting that she wanted to dismantle stereotypes the notion that an empowered princess needs to be a sassy one.

"I think sometimes in the past when creating these female roles, there's been this sense of, 'she's strong because she says something sassy,' or 'she's strong because she says something witty to a man.' No, that's not really it for me. She's actually fighting for the freedom of choice, and for the people. That is feminism and that's what's important. That's what makes her strong."

What's striking from our conversation is how incredibly strategic Scott was in crafting her Jasmine, particularly when it came to the performance of "Speechless." Written by original Aladdin composer Alan Menken, it's undeniably her "Let It Go" moment. Noting that she grew up on Mary Mary and Kirk Franklin, Scott describes the song as "bloody hard" to sing, adding that she "didn't want [her performance] to be pretty."

"The day that we shot that scene... I remember it was a time in the media [when] there was so much about women and men who had been speaking out against things that had happened to them. I felt the weight of that. There are so many people that have come before me that have spoken out, and it's not had a positive effect on their life. It's tough when you speak out, you get that backlash. [But] there are women and there are people that have gone before me that have spoken out and allowed me to feel more protected in my job."

Scott explains that there was a personal weight added to that.

"I think of women that have had to sacrifice. My nan, is from Uganda, she had 10 kids. She sacrificed so much for her children. She was married at 15, had her first kid when she was 16. For me, I look at nan, and I go, 'Wow.' What you gave, allows me to do what I'm doing now."

Scott is now in a position where she is heartily and comfortably big time — but it wasn't always that way. "I went through a lot of being the nearly girl and losing out to the more, potentially, business-wise [casting]," Scott explains. "I'd always be like, 'Oh man.' But now I'm just like, 'I love who I am, and I'm cool with it.'" She's taken a similarly relaxed and open approach to speaking about her faith. Both her parents are ministers in the UK's Bridge Pentecostal church, and while speaking about religion might be standard fare for American celebrities, the same can't be said for us Brits.

"Quite honestly, we've just decided, 'Let's just do this being honest and being myself,'" she tells. "It doesn't mean that just because I have a faith that I've got it all together or that I know the answers to all the hard questions."

It's impossible to have a conversation about this new film without considering representation — both it's value for today's children and young adults, and how lacking it's been until now. This is Disney's most diverse ever film, and Scott is clear on its importance. "I think that for other girls and young girls, young boys, seeing someone who they can play... is simple, but it's powerful too," Scott says. "A young kid might not get all the nuances but they can be like, 'Oh my gosh, I can be her.' That's something I think is really powerful." While noting that we're starting to see "some of the myths busted" around what films sell, she points to Black Panther as a watershed moment. "Black kids had to relate to the white lead for a long time, trust me you can do it too. It's not actually that hard, you can still relate."

Scott features in an ensemble cast, and the film is exceedingly joyous. When asked by influencer Amena Khan about her favourite scene to film, she points first to "Speechless," and then to the final Harvest festival scene. "I was ready to [pop it]," Scott laughs.

"That's because me and my Greek friend when we were little, when we were younger, she taught me how to dance. This is so sad. We'd be learning all the dances. You remember that song, "Roll It Gal." Like the "TikTok" and the "Dutty Wine" and stuff... That was really fun because I love to dance, [and] our choreographer as well is so sick, Jamal, he added a modern play. I love that, because I didn't want it to be dry. [I was] like, 'This cannot be dry.'"

You'll see for yourself, but I'm sure the last word that would come to mind for this film is dry.