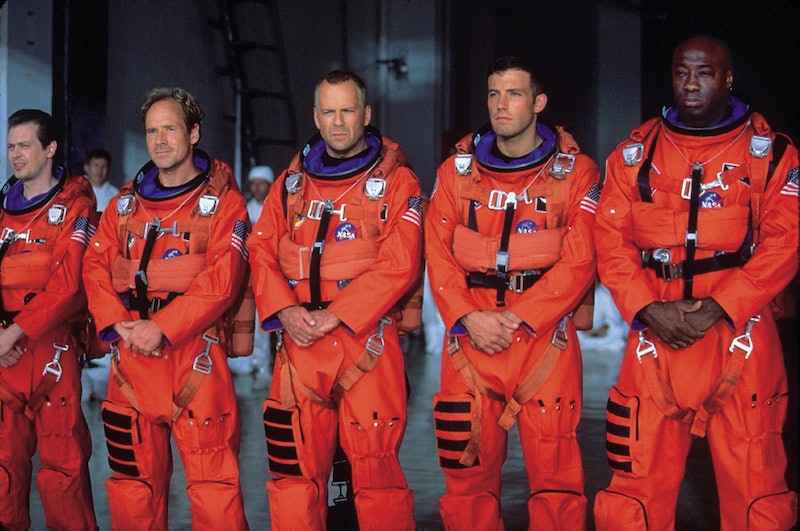 In June, NASA approved plans to move forward with a program that will launch a spacecraft at an asteroid, in an effort to test humanity’s ability to deflect asteroids headed toward Earth. Nope, I’m not talking about 1998’s Armageddon. The space agency really does have a program in place for “Asteroid Impact and Deflection Assessment” (AIDA), and it has plans to send a spacecraft to intercept an asteroid in 2022, in what is called the “Double Asteroid Redirection Test” (DART). Unfortunately, it does not appear that Bruce Willis or Aerosmith are involved in any way.

Small asteroids hit our planet frequently and break up in our atmosphere without doing any damage. Really large asteroids — more than .6 miles across — could do significant global damage, but NASA is able to keep track of most of these objects. NASA is deploying DART in order to study the “intermediate”-sized asteroids in between these two extremes; these mid-sized asteroids could do regional damage should they collide with Earth, according to a statement by NASA.

Lindley Johnson, planetary defense officer at NASA in Washington (who also has the most badass job title ever), explained,

DART would be NASA’s first mission to demonstrate what’s known as the kinetic impactor technique — striking the asteroid to shift its orbit — to defend against a potential future asteroid impact. This approval step advances the project toward an historic test with a non-threatening small asteroid.

The target for the test is a binary asteroid system called, “Didymos.” DART would aim to impact Didymos B, the smaller of the two asteroids.

Here’s how it’ll work: DART will be launched in 2020, in order to intercept Didymos B in 2022. According to the NASA statement, “[T]he refrigerator-sized spacecraft would strike the smaller body at a speed about nine times faster than a bullet, approximately 3.7 miles per second (6 kilometers per second).” Scientists predict that the impact will alter the speed of the asteroid by only a tiny amount, but it will be enough to significantly alter the asteroid’s route in the long term. You can see a simulation of the test in the video above.

“DART is a critical step in demonstrating we can protect our planet from a future asteroid impact,” Andy Cheng, DART co-lead, said. “Since we don’t know that much about their internal structure or composition, we need to perform this experiment on a real asteroid. With DART, we can show how to protect Earth from an asteroid strike with a kinetic impactor by knocking the hazardous object into a different flight path that would not threaten the planet.”

It’s nice to know that there’s a plan in place for at least one apocalyptic movie scenario, right?

More like this
5 Ways To Help People Impacted By Hurricane Ian In Cuba & Florida
By Emma Carey
8 Completely Unserious Tips To Make Your Cuffing Season A Success
By Ginny Hogan
Here’s Your Daily Horoscope For October 6, 2022
By Mecca Woods
It's A Pleasure #53: Help! My Boyfriend Won't Tell Me Why He Stopped Going Down On Me
By Sophia Benoit
Get Even More From Bustle — Sign Up For The Newsletter