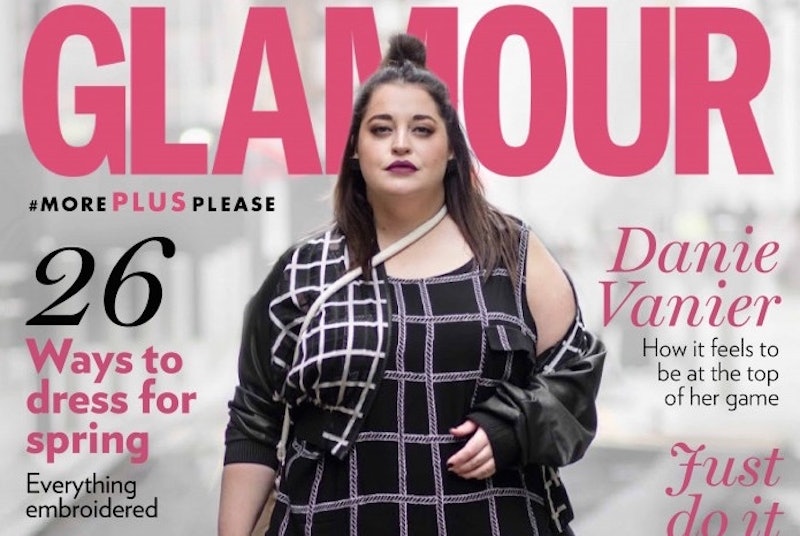 Open up the web page for plus size brand navabi's #MorePlusPlease project and you'll be greeted with an image of plus size lifestyle blogger Chloe Pierre on the cover of Wonderland Magazine. She is wearing rose faux fur, assuming a power stance of sorts. Pierre intentionally takes up the majority of the frame, unapologetic in her breadth.

Scroll through the page some more, and you'll notice plus size fashion and beauty guru Danielle Vanier rocking mixed check prints on Glamour. Then there's plus size columnist and lifestyle blogger Callie Thorpe headlining Brides. An ear-to-ear smile lines her visage as she rests a hand on her new husband. She also appears in a glorious underwater snap for Wonderland. Her upper half is bare — deceivingly, ethereally nude if you glance at the photo quickly.

Eleven covers decorate the page in total. According to plus size brand navabi's Social Media Editor Bethany Rutter, "The absence of plus size women in mainstream magazines" is what drove navabi to create these covers. "If we appear at all, we appear as 'before' photos in a diet feature, or a token interview with an 'acceptable' plus size model," Rutter tells Bustle. "It's never meaningful, systematic representation of plus size women as complete people with lives and achievements like everyone else." The kind of representation that might have the potential to make many people feel less othered — more seen.

Rutter tells Bustle that it's "hard to exist in a world where you just don't see yourself. So if you went to the supermarket and saw women who looked even vaguely like you staring back from the magazine racks, then it would go some way to make you feel more at home in the world [...] Representation is such an important piece of the puzzle, and sites like Bustle, Revelist, Refinery29 which do interesting coverage of plus size women are totally vital, but if you don't live on the internet or [you] have a more mainstream interest in fashion and identity, then you might miss them."

Another win for the covers is their utilization of entire plus size bodies — not just the faces of plus size women. When it comes to the already rare representation of plus babes in mainstream fashion magazines, one problematic facet is that their images often end up being head shots. If not head shots, then their bodies will typically be concealed beneath loose-fitting or oversized garments.

Rutter believes this is down to two things. "Firstly, it's easier to conceal fatness when you're not showing someone's body," she tells Bustle. "And secondly, [it's] often [said] how hard it is to get clothes for shoots of anyone who isn't sample size. So if you don't show their body, it removes the issue of getting a range of clothes to dress the model in. Sample size has a kind of stranglehold on the fashion industry so maybe women's magazines finding a way to disrupt that would lead to better representation for women who are anything other than very thin."

On a more interpersonal level, it can often seem as though poor visibility trickles down to the notion that fashion is supposedly meant to be "aspirational." And, realistically, women and femmes are most often told to aspire to thinness. The logic that follows is that plus size individuals simply wouldn't look as good (or dreamlike, or envy-inducing) on those covers or in those clothes.

A conversation about celebrating plus size people can never go long without being bombarded with the accusation that doing so "glorifies obesity" as well. But as Rutter tells Bustle, looking at images of people's bodies will never be enough to make you assume that body. "If you could make people thin by only showing them positive representations of thin women, I would have grown up thin," she jokes.

At the end of the day, the positive value of navabi's images is undeniable. Blogger Danielle Vanier, who appeared in two of navabi's covers, tells Bustle that "it's clear from these mock front covers that each and every one of these women looks incredible. We need to see more of this in the media. Our bodies are worthy and our opinions on fashion and style are just as important as everyone else's."

Chloe Pierre, also pictured in navabi's images, echoes her thoughts. "The truth, in all forms, is needed and craved by audiences everywhere now," she tells Bustle. "That's why navabi taking this major step is so important and, dare I say, innovative."

Ultimately, there is not a single image in #MorePlusPlease that looks out-of-place or impossible to imagine. In Rutter's words, "it shouldn't be such a stretch of the imagination" to picture visibly, unapologetically fat or plus size women having a role in mainstream fashion. If there's anything navabi's covers prove, it's that there's no viable, tangible excuse for the exclusion. Any "excuse" given, at this point, is nothing more than a prejudice.