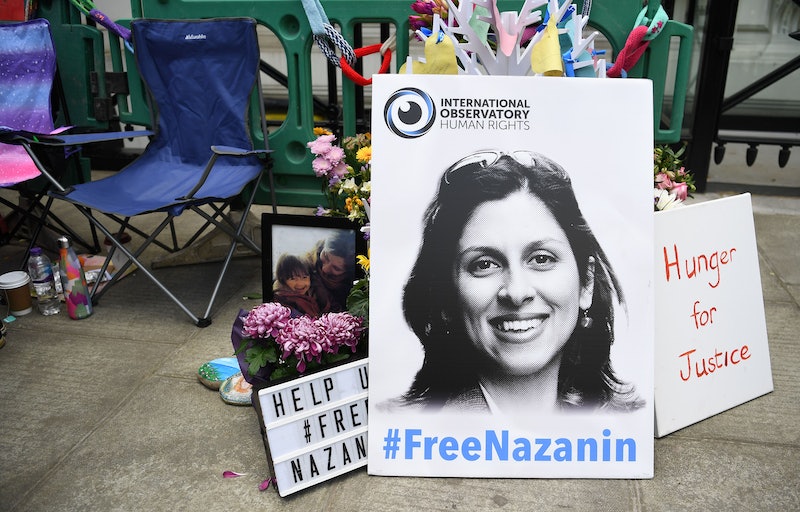 Nazanin Zaghari-Ratcliffe — a British-Iranian citizen who has been held as a political prisoner in Iran since 2016 — is suspected to have coronavirus, her husband has revealed. The 42-year-old's family have requested her temporary release from Evin prison, The Times reports, over fears it has an outbreak of the virus.

Zaghari-Ratcliffe received a five-year sentence for alleged spying, per the Guardian, but has always denied the charges. Her case has been an ongoing source of conflict between the British and Iranian governments. In 2019, she was granted diplomatic protection to try and secure her release. So far, attempts have failed; mainly because Iran refuses to acknowledge dual citizenship.

Speaking on the phone from prison, per The Times, Zaghari-Ratcliffe said her symptoms "have lasted almost a week" and have "not felt like a normal cold." She is complaining of a fever, sore throat, muscle pain, fatigue, and difficulty breathing, the Guardian reports. Prison staff have refused to test her for coronavirus, according to the newspaper, despite at least one inmate reportedly dying from it.

Aside from China, Iran has experienced one of the most severe outbreaks of coronavirus, states the European Centre for Disease Prevention and Control (ECDC). Its government has been accused of covering up the scale of the virus by denying reports of increasing deaths.

Sources told BBC Persian more than 200 people had died from coronavirus; the official death toll, given by the country's health ministry, currently sits at 54, the Guardian reports. (Ministry spokesman Kianoush Jahanpour accused the BBC of "spreading lies.") Recent research by Canadian experts estimated Iran had almost 20,000 cases of coronavirus, despite only 978 being officially reported, per the Guardian.

Although there has been no government confirmation of coronavirus in Evin prison, there have been plenty of reports. Zaghari-Ratcliffe's husband, Richard Ratcliffe, said he'd heard a quarantine area had been set up and that prisoners had died. "Plans to send eligible prisoners home temporarily" had also been announced, he wrote for iNews. However, "security prisoners" like Zaghari-Ratcliffe were not on that list.

There are also concerns the prison is unable to deal with a potential outbreak. Ratcliffe said his wife had reported no available medicine or cleaning products on the women's ward. "Prisoners could have bought their own cleaning materials from the prison shop, except the prison shop had also run out of everything except washing up liquid," he wrote. "So the women protect themselves from the virus with washing up liquid."

As the Guardian reports, the Foreign Office has asked for health professionals to be immediately allowed into Evin prison "to assess the situation of British-Iranian dual nationals there." Zaghari-Ratcliffe had previously been denied medical assistance while behind bars, per ITV News. United Nations experts told the broadcaster this failure may amount to torture.