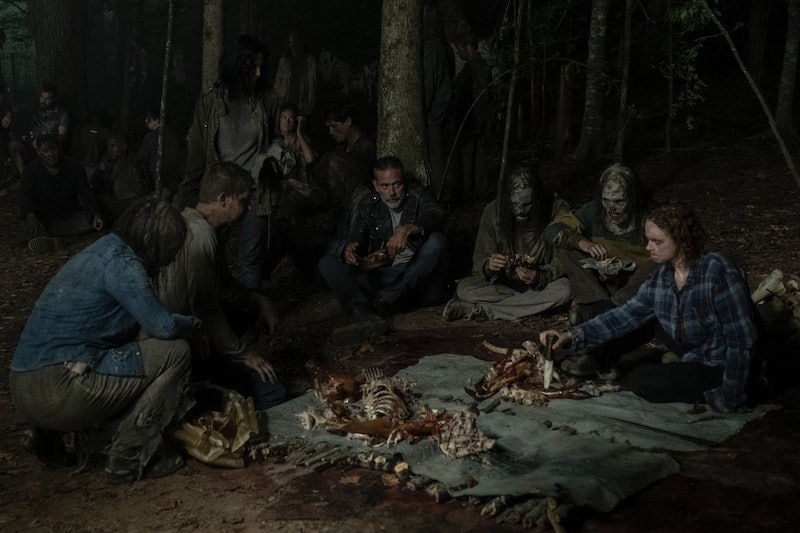 Spoilers ahead for The Walking Dead Season 10. Negan might be tricking Alpha and the Whisperers into trusting him, but the con went way too far when Negan and Alpha hooked up on The Walking Dead. Alpha wanted to reward the "crass" Negan for providing the tip that Gamma has been a spy for his former community. She ordered him to strip down and she did the same, offering him the gift of sex for his intel. There's nothing gross about consensual sex or kinks between two adults. But Alpha leaving on her Walker mask and Negan claiming it was a turn on as they embraced is just something you cannot unsee. Walking Dead fans have seen a lot of disgusting things over the course of 10 seasons, but this was...it was a lot.

Negan and Alpha both have unhealthy and even abusive attitudes toward sex in The Walking Dead. Negan forced a group of women to be his wives when he led the Sanctuary and in the comics, Alpha has allowed rape to be a way of life for the Whisperers. This sex scene between these destructive dictators was something they both appeared to willingly agree to — but because of their respective pasts, it does feel inherently icky.

It's possibly even worse if you believe that Negan isn't really a loyal Whisperer. Negan's brand is certainly not to be a follower (nor is it to be silent), so he's probably playing the Whisperers to eventually help the Hilltop, Alexandria, and Oceanside communities.

Infiltrating the Whisperers camp would be in line with his comic storyline. It would also be the next logical step in his character development because otherwise, what was the point of showing his more compassionate side earlier on in the season with Judith and Lydia?

This relationship is certainly not headed anywhere good, whether this is true Whisperer love or a one-time fling. Either way, it will forever be burned into viewers' memories. But hey, if you're feeling like you'll never recover from the Alpha and Negan sex scene, just think about how Beta must feel.