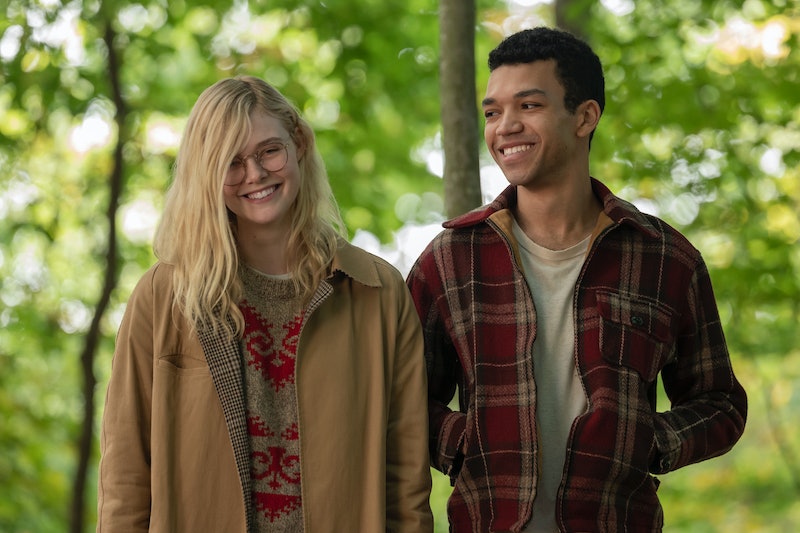 The genre of sad teenage romance continues with the trailer for Netflix's All the Bright Places that just dropped, and the YA adaptation is most definitely going to be a tearjerker. Elle Fanning and Justice Smith play two lovestruck teenagers trying to navigate dark times in their lives in the clip. It's basically the next Fault in Our Stars.

All the Bright Places, based on Jennifer Niven's novel of the same name, follows Violet Markey (Fanning) and Theodore Finch (Smith), who become involved after partnering for a school project. Between Violet grieving over her sister's death and Theodore struggling with his mental health, they form an intense, but strong friendship.

The trailer shows Violet and Theodore leaning on each other, all while learning "there are bright places even in dark times." They, obviously, become each other's bright place while battling the darkness, just like A Walk to Remember's Jamie and Landon did before them.

But just because there's love doesn't mean the movie won't be dark. "Depression and mental illness in young people is so real, and it’s something people don’t want to talk about and want to shy away from, Fanning, who is also one of the film's producers, told Marie Claire as the magazine's February cover star. "It has to be out there for people to see it, to get help, to not keep it hidden."

The film seems to fall perfectly into the sad teenage romance genre that never fails to make fans weep over young love. And, based on that formula — spoiler alert for A Walk To Remember and The Fault in Our Stars — audiences might want to brace themselves for the death of one of the leads. Sad, sick, teenage romance tends to end in tragedy, and something about the All the Bright Places trailer makes us think this movie will be no different.

More like this
These 25 International Horror Movies On Netflix Prove Fear Is A Universal Language
By Bustle Editors
Nicola Coughlan Shared A Lady Whistledown Excerpt From ‘Bridgerton’ Season 3
By Grace Wehniainen, Alyssa Lapid and Sam Ramsden
Here’s Everything Coming To & Leaving Netflix In October
By Jake Viswanath
Netflix Reveals First Look At Wednesday In The 'Addams Family' Spinoff Series
By Bustle Editors
Get Even More From Bustle — Sign Up For The Newsletter