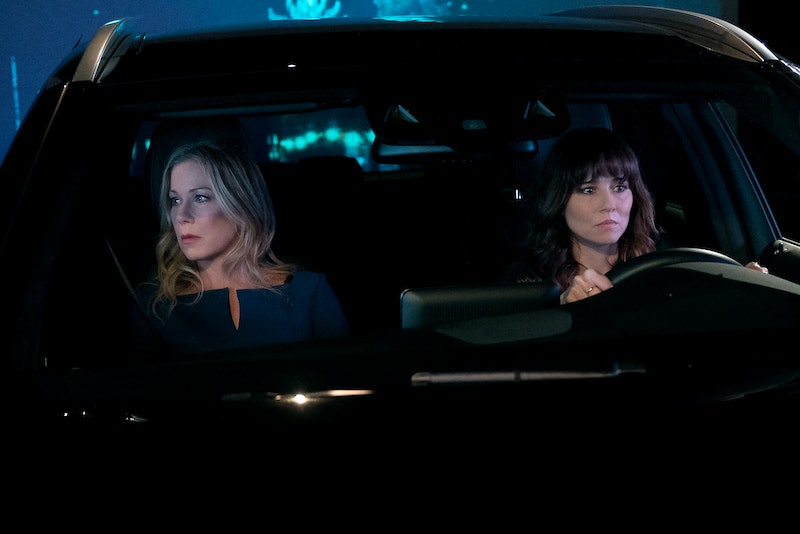 Spoilers ahead for Season 1 of Netflix's Dead to Me. Netflix's new dramedy, Dead to Me, traverses the delicate lines between tragedy, comedy, friendship, and angst. But while there are plenty of lighthearted moments within the series, it's ultimately a story about the various forms that grief can take, whether you're mourning a death, a relationship, the loss of your sense of self — or even your sense of someone else.

Christina Applegate stars in the show as Jen, a recent widower trying to maintain her real estate career and raise two children after her husband Ted was killed in a hit-and-run. She attends a grief support group and befriends Judy (Linda Cardellini), who is her polar opposite in every way as a spiritual, laid-back free spirit. Judy initially lies and says her fiancé, Steve, is dead, and when Jen discovers he's actually alive and well, she's furious. But after Judy explains he ended their relationship after she suffered five miscarriages, the two make amends, and Jen invites her to move into her house. The two become inseparably close, providing each other emotional support and companionship during these major transitions in their lives. But Jen doesn't know Judy is hiding a devastating secret: she's the person who accidentally killed Ted.

In the months following Ted's death, Jen finds herself cycling through moments of intense rage and insomnia. She's tightly wound and snarky — both attributes that have been exacerbated by her pain. According to Psychology Today, this is quite normal: anger is a common manifestation for grief. But as Jen lashes out at those around her, Judy acts as her anchor, helping to calm her down and offer another perspective.

Judy, too, is working through the grieving process, albeit under different circumstances. The loss of several pregnancies and Steve's decision to leave her because of them has left her feeling broken and unworthy, and she tries to channel her pain into helping others. This — and her desperation to absolve the guilt of killing Ted — is why she latches onto Jen. But unlike her friend, Judy crumbles inwardly, not outwardly, as she copes with her grief. She has panic attacks alone in the bathroom, but is composed and optimistic in public, seraching for answers in spirituality and healing retreats. Both she and Jen are stifling and ignoring their feelings, but that process manifests itself differently for each of them.

Dead to Me also shows that grief is not always about death — you can grieve the loss of a career, your closeness with a friend, or in Judy and Jen's case, your perception of a person who is not who you thought they were. Jen discovers that Ted was cheating on her with a young, unsuspecting waitress, and reveals that after she got a mastectomy, he hadn't touched her for a year. She blames herself for his death — she kicked him out after a fight on the night he died — but his betrayal adds another layer to Jen's complicated mix of emotions.

Judy has to go through a similar process with Steve, who was an accomplice in Ted's death. Throughout the season, she continuously falls back into her fantasy of him and the life they wanted to have together, only to have it come crashing down when she's told she's infertile, or when he says something cruel. Steve is dismissive of Judy's beliefs and often resorts to insults and name-calling when they're in disagreement, not to mention that he dumped her when she was at her lowest point. Over the course of the show, it becomes increasingly clear that he's a callous, self-serving person, and in turn, Judy must slowly deconstruct her false perception of him.

Ultimately, Dead to Me illustrates the many ways grief can take shape, as well as the many ways we confront — or avoid — it. But for Judy and Jen, there's something unifying about it, too: they may be much different people, but their grief is what brings them together. And hopefully, that bond is what will get them through it.

More like this
Here's What Jeffrey Dahmer's Dad Has Said About His Other Son, David
By Grace Wehniainen
Where Is Lionel Dahmer Today? Jeffrey Dahmer’s Father Reflected On The Serial Killer’s Death In 2020
By Brad Witter
If 'Entergalactic' Season 2 Happens, You Could Get A New Kid Cudi Album
By Kadin Burnett
Glenda Cleveland Died 2 Decades After Trying To Turn In Neighbor Jeffrey Dahmer
By Brad Witter
Get Even More From Bustle — Sign Up For The Newsletter