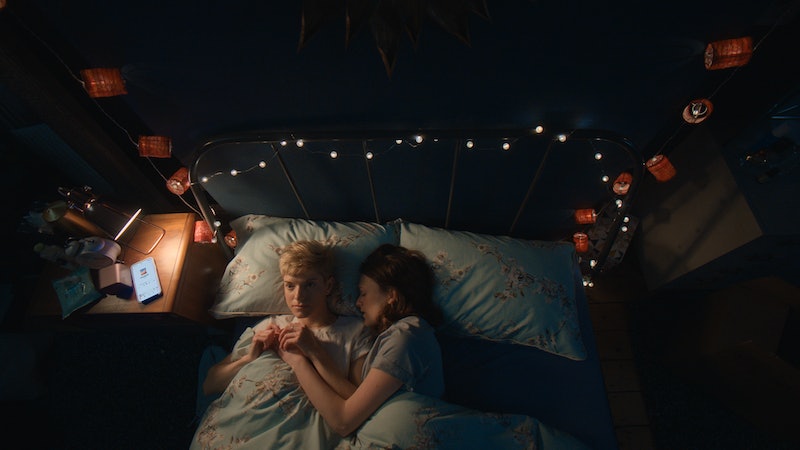 Whether you laugh until you cry or vice versa, the Feel Good trailer starring comedian Mae Martin is sure to make you feel plenty. From comedy to the drama that comes with grappling with issues like addiction, sobriety, and sexual identity, nothing is off limits in Martin's semi-autobiographical series, which premieres on Netflix March 19. If you're not yet familiar with the Canadian-born comedian — who co-created, co-wrote, and also stars as Mae in Feel Good — get ready for her to steal your heart as quickly as she does George's (Charlotte Ritchie).

There's a fine line between real-life Mae and the fictional version, with the latter introducing herself in the trailer's opening standup routine as a Canadian who "came over in a canoe recently with Celine Dion." Not everything seems to be a laughing matter, however, when it's soon revealed that Mae is also a recovering addict. Off screen, Martin has openly discussed her own experience with addiction (which actually began with a Bette Midler obsession, of all things) and has hosted her own BBC Radio 4 series, Mae Martin's Guide to 21st Century Addiction.

"It means the world to be able to share something so personal, and I always find that the more specific and weird the things you share are, the more people relate to them," Martin tells Bustle of her six-episode Netflix series, which was co-produced with Channel 4 in the UK. "So I hope that's the case. If not, I'll write a sci-fi about mole people and aliens next time."

Martin adds, "We tried to write a comedy drama that's properly funny and packs an emotional punch, and that's exemplified by Lisa Kudrow's amazing performance, which I'm excited for people to see."

Yes, you read that correctly. Friends alum Lisa Kudrow plays Mae's mother Linda, and she has her fair share of comedic moments in the trailer for the series, which former Schitt's Creek story editor Ally Pankiw both directed and executive produced. Highlights include Kudrow's Linda inadvertently spilling Mae's "secret" in front of George during a parental video chat, as well as expressing her bewilderment over where Mae's "very addictive personality" came from — while she pours herself a generously portioned glass of wine.

But the real focus of the series is the "intoxicating romance" between Mae and George, who is described as "pragmatic — but so far heterosexual." Martin adds that the pair is "a total mess," yet she's still rooting for them. She hopes viewers fall in love with them, too. Judging from their scenes in the trailer, that won't be hard to do.

More like this
Netflix Reveals First Look At Wednesday In The 'Addams Family' Spinoff Series
By Bustle Editors
‘The Ultimatum: Queer Love’ Is Officially On The Way
By Radhika Menon and Kadin Burnett
Devi Is Going To Meet A “Smoldering Bad Boy” In ‘Never Have I Ever’ Season 4
By Jack Irvin and Gabrielle Bondi
Here's When 'The Crown' Season 5 Will Premiere — And What To Expect
By Bustle Editors
Get Even More From Bustle — Sign Up For The Newsletter