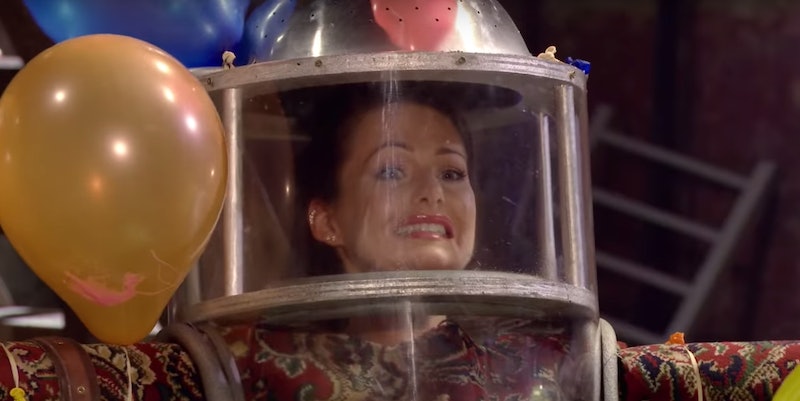 Would you put yourself through three rounds of low-grade torture to win some money? How about for no money? That's what the contestants of Netflix's new show Flinch have signed up for, because it does not look like the Flinch winner gets an actual prize. The show puts eight contestants through three rounds of flinch-inducing activities (getting hit with a paintball gun, having bursts of flames shoot out near your head, having chickens peck at a feed tray around your neck, etc.) The winner is crowned Flinch Champion, but bragging rights seems to be all they get.

At one point, the show apparently pondered giving contestants a cash prize, because IGN reported that the initial Netflix synopsis read, "[Flinch] is a game show where contestants are put in situations where they are tempted to flinch. If they flinch, they are electrocuted and lose their chance at winning prize money."

However, the synopsis on Netflix now reads, "Harrowing and hilarious tests await the brave and foolhardy, as well as the hosts, in this comedy game show. If they flinch, they feel the pain."

There are a couple of changes there with both the lack of prize and the hosts' involvement. The current iteration of the show puts eight contestants to the test. The three hosts each pick one contestant to represent them. Whichever host's contestant flinches the most loses and that host must face their own flinching test. Instead of losing prize money if they flinch, they're just inflicted with pain — usually via electric shocks. So it seems the prize for flinching the least is just bragging rights and getting to see one of the hosts endure what you just did.

The show's narrator also rewards the Flinch Champion each episode by verbally solidifying their Flinch legacy. For example one winner "now lives in the hallowed halls of Flinch fame for eternity" while another "will live on in Flinch folklore forever." Another winner is informally inducted into "the halls of Flinch stardom until the end of time" and yet another will "go down in the annals of Flinch glory."

That's not really a prize, but it's something fun to brag about on social media at least. Still, the lack of any sort of concrete prize really highlights the ridiculousness of participating on a show like this. There is almost no reason to do it, unless the contestants got paid to be on the show and that just wasn't disclosed to viewers. Maybe contestants will get more Instagram followers (though that's doubtful, since neither their last names or social media handles are included), and they did get to be on TV. But since the challenges are far from fun, it doesn't make much sense to participate unless you have some sort of wild competitive streak where you just have to prove that you're the least flinch-y person — or maybe you were just really bored on casting day.

When it came time to actually get strapped into the various flinch-inducing contraptions, contestants looked a little wary. Callum, who went first in the first episode, summed things up nicely when he suddenly asked, "Why am I on this show?" I don't know Callum. I wish I did.