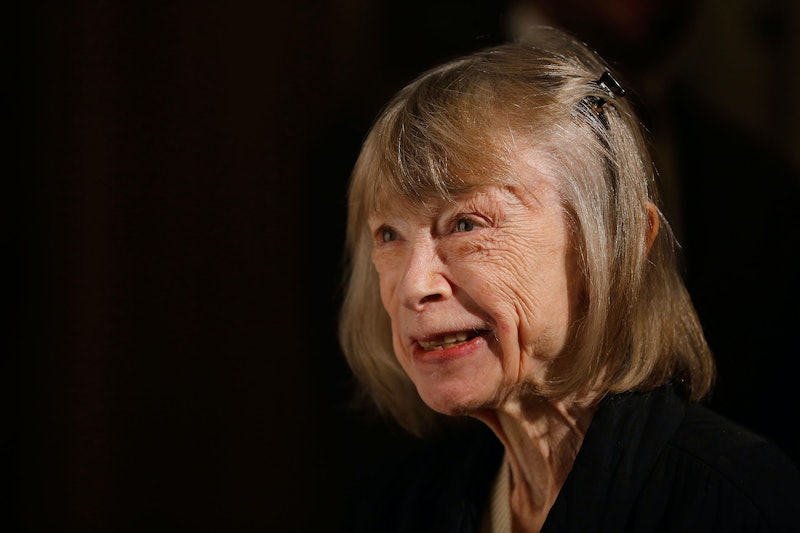 If every mansplainer were as ardent about telling people to read Joan Didion't Slouching Towards Bethlehem as they are with David Foster Wallace's Infinite Jest, the world would be a better place. That's not to say that either book is better than the other — they're too different to compare, really — but the more exposure that people have to the former, the better. Perhaps that day has come, as Didion is the subject of a new Netflix documentary, The Center Will Not Hold, out Oct. 27, that gives an intimate glimpse into the iconic writer's eclectic, heartbreak-heavy life. The film is worth viewing by all, but for writers, Netflix's Didion doc is essential viewing, acting as a masterclass in how a true virtuoso approaches her craft.

You'd be hard pressed to find a writer unfamiliar with Didion's work, as she's so prolific and acclaimed. Born in 1934, the author has published over 15 books, both fiction and nonfiction, as well as multiple screenplays. It's inevitable that most writers have stumbled upon Didion's work at one point or another, but The Center Will Not Hold allows for a new level of appreciation for the author to arise. For instance, the doc highlights Didion's contribution to implementing new genres and styles, such as her decision to publish personal essays in women's magazines, practically unheard of at the time. Her 1961 essay, Self-respect: Its Source, Its Power, was the first personal essay to be printed by Vogue — and a testimonial by Anna Wintour herself in the doc confirms how meaningful this was.

Without Didion's pioneering piece in Vogue, the rise in personal essays over the last few decades would possibly never have happened. This is especially significant for women since, as Jia Tolentino writes in the New Yorker, personal essays have mostly been written by female authors. Although the form has certainly suffered in recent years and has withstood its share of controversy, the idea that women's personal stories have been deemed legitimate and worthy of sharing is owed, in part, to Didion and her drive.

And she's done so much more than just that, whether through her screenplays or journalism or any use of language, really. The Center Will Not Hold does a spectacular job of communicating what's nearly impossible to communicate: how exactly Didion writes. For her, writing appears to be a natural coping mechanism in dealing with life's chaos. The documentary's title itself refers to William Butler Yeats poem, "The Second Coming," which, as Didion explains in the film, aptly describes the uncertainty of the late '60s. Hearing the author remember this time in the doc as a "senseless chain" offers insight into how and why her work from that time was so momentous, and how she's managed to create writing that's considered some of the best available today.

Part of what sets Didion's writing apart is how she confronts the things in her life that have caused her the greatest confusion and pain. The author has suffered enormous tragedy in her life due to the untimely deaths of her husband and daughter, but she's turned those horrors into stunning pieces of art. Didion's individual way of looking at the world is encapsulated in a line said by her nephew and the doc's creator, Griffin Dunne: "Storytelling was a way of enduring the potent rawness Joan experienced through life, and through loss." Rather than push aside all of the tragedies in her life — and there have been many — Didion faces them head-on. For anyone who has ever wished to write more like her, hearing her explain this process firsthand is invaluable.

That goes for tragedies not about her own life, too. Didion explains in the doc that "everything seemed explicable" before the 1969 Manson murders, for instance. The mass murders deeply troubled the journalist, and that's exactly why she wrote about them in The White Album. Her accounts of her years spent covering the '60s and '70s as a witness and observer also illuminates a moral ambiguity which writers will likely relate to strongly. When asked about her reaction to, at one point, seeing a five year-old girl on LSD, Didion explains in the doc, "It was gold. You live for moments like this, good or bad." Many viewers might interpret that answer as a psychopathic emotional detachment, but really, it shows Didion's passion for and commitment to her job as a reporter. Writers watching The Center Will Not Hold will find great inspiration in just how determined Didion was to face the dark acts of humanity so that everyone could become more aware of them through her writing.

Few writers' cultural critiques and observations are as profound as Didion's, and in The Center Will Not Hold, offers essential insight into how she's done it. What it comes down to, for the author, is simply using her life as material, aka following the popular writing advice, "write what you know." As the documentary makes clear, Didion knows that to be a good writer, one must immerse themselves in the things that they don't know, too, and explore what makes them uncomfortable. Over the past many decades, she's done that brilliantly, and The Center Will Not Hold will likely inspire any writer who watches the documentary to take out their journal and channel their inner Didion to go deep, where nobody else will.