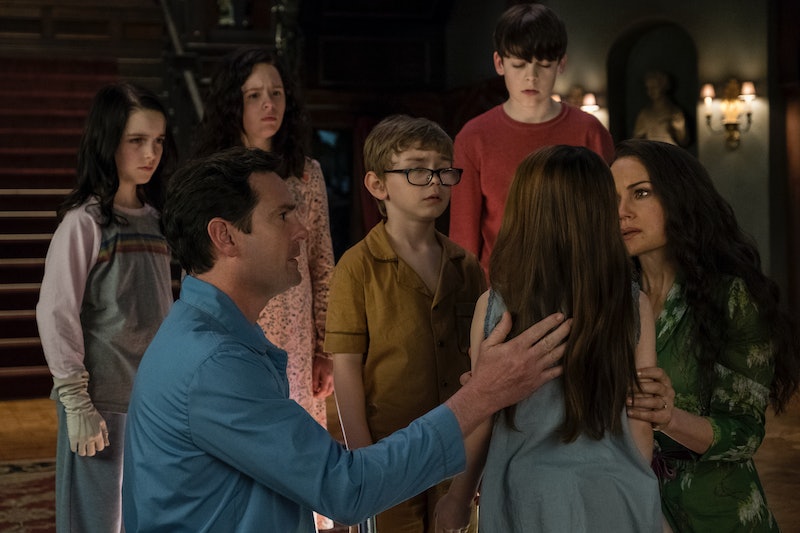 The bent-neck lady is about to get some help keeping you up at night. Netflix revealed on Wednesday, Feb. 5 that The Haunting of Hill House creator Mike Flanagan's new horror series, titled Midnight Mass, is officially in the works. The forthcoming show will center on an isolated island community that "experiences miraculous events — and frightening omens — after the arrival of a charismatic, mysterious young priest," according to Netflix's official Midnight Mass logline.

Flanagan, who most recently helmed the 2019 Stephen King Doctor Sleep adaptation, will executive produce and direct all seven episodes of the Netflix series, which is slated to begin shooting this spring in Vancouver. His involvement won't be the only Hill House connection either. Kate Siegel, who played the modern-day version of Theodora Crain, is set to star alongside fellow Hill House castmates Henry Thomas (young Hugh Crain) and Annabeth Gish (Mrs. Dudley). Other newly announced Midnight Mass cast members include Friday Night Lights actor Zach Gilford, as well as Legion's Hamish Linklater.

In addition to the new series, Flanagan's second season of the Hill House anthology series, which will be focused on the Bly Manor setting from Henry James' 1898 horror novella The Turn of the Screw, is slated to premiere sometime this year. Siegel and Thomas are also set to appear in the Bly Manor installment, along with fellow Hill House alums Victoria Pedretti (Nell Crain), Oliver Jackson-Cohen (Luke Crain), and Catherine Parker (Poppy Hill).

None of the actors will be reprising their Season 1 roles, however, with The Haunting of Bly Manor focusing on a new story with new characters. Flanagan had previously explained to Entertainment Weekly in Oct. 2018 that "the story of the Crain family is told. It's done."

In an Aug. 2019 interview with Birth.Movies.Death., Flanagan also teased that The Haunting of Bly Manor may be even scarier than Hill House. "We're looking at all the ghost stories of Henry James as the jumping-off point for the season, so it very much is a whole new deal," he told the movie website. "For Henry James fans, it's going to be pretty wild, and for people who aren’t familiar with his work, it's going to be unbelievably scary. I already think it’s much scarier than Season 1, so I'm very excited about it."

He's given horror buffs plenty to look forward to as well — even if that may mean spending a few nights sleeping with the lights on.

More like this
Nicola Coughlan Shared A Lady Whistledown Excerpt From ‘Bridgerton’ Season 3
By Grace Wehniainen, Alyssa Lapid and Sam Ramsden
The First 'Percy Jackson & The Olympians' Teaser Comes With An Ominous Warning
By Grace Wehniainen
A New 'And Just Like That' Table Read Pic Confirms A Key Character's Return
By Jack Irvin and Grace Wehniainen
‘Squid Game’ Creator Hwang Dong-Hyuk Just Dropped A Major Season 2 Tease
By Brian Anthony Hernandez and Bustle Editors
Get Even More From Bustle — Sign Up For The Newsletter