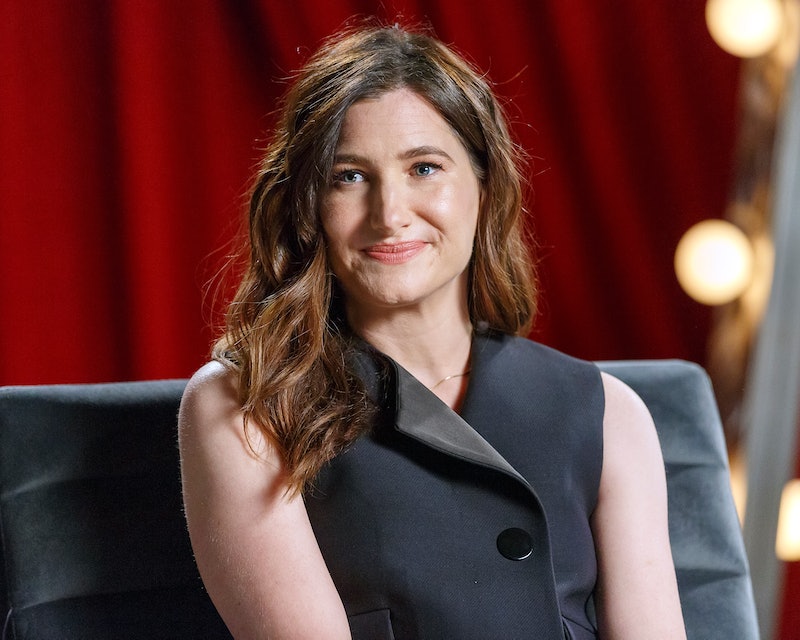 If there’s one thing you can be sure of when talking to actor Kathryn Hahn, it’s that she’s going to give it to you straight. When I arrive to speak to her at the Four Seasons Hotel in Beverly Hills, she’s ditched her junket attire (a very tight dress, she specifies) for a more casual look — lightly distressed, sky blue denim overalls and a pair of fuzzy, black slides a la the trend started by queen of cool, Rihanna. “I was wearing a little fancier clothes and I was like, I can’t do it anymore,” she says with a laugh. It seems quite appropriate that she’s taken on a casual vibe to chat about her new Netflix movie, Tamara Jenkins’ Private Life, which gets, well, pretty damn private for its characters.

The film, out Oct. 5, follows a couple (Hahn and Paul Giamatti) quite candidly as they attempt to have a child via assisted reproduction and fail continually, driving themselves into debt to chase the dream. Though she’s very insistent that the film is primarily about the couple’s marriage and that it’s not a “subject movie” (and trust me, it’s not), Hahn is not oblivious to the fact that the premise will strike a chord — particularly with young feminists who are waiting to have kids until they — and their careers — feel ready.

We’re kind of told that we are in control of our fertility somewhat, and that’s a tough thing to feel betrayed by your own biology.

It’s a feeling Hahn — who has not experienced her character’s particular struggles, but had her two kids in her mid-30s only to be told by “an unfeeling doctor” that she was a “geriatric mother” — completely understands.

“I certainly wasn’t ready to have kids in my 20s, which is I guess our most fertile time,” she says. (The American Society for Reproductive Medicine states that “peak efficiency in the female reproductive system occurs in the early 20s with a steady decline thereafter” — how charming.) “I didn’t want to be a mom, I wanted to work. I wanted to have my life. I was not ready. I wasn’t ready until my mid-30s, and I was like barely ready. Barely.”

Unfortunately, doctors aren’t the only thing that can be unfeeling when it comes to women who want to have a career before they have kids — the science is kind of screwing us over for waiting, too. Yes, there are scientific advancements aimed to help women beat the odds (in vitro fertilization, freezing one’s eggs, etc.), but for many people — including Hahn’s Private Life character, Rachel — that science is more of a gamble than a guarantee (a comparison not lost on Rachel's friends and family, who worry that she and her husband are addicted to trying, throughout the film).

In fact, according to the CDC’s ART Fertility Clinics Success Rate Report, women from 35 to 40 saw a 32.5 to 11.1 percent successful birth rate across various methods, while women over 40 faced a less than 10 percent birth rate for most assisted reproduction methods. And then there’s the cost to take gamble in the first place. While many websites quote $12,000-15,000 as the average price of an IVF procedure in the U.S., one couple chronicled their financial journey on Huffpost’s IVFML podcast and said they spent $21,000, with $5,000 paid by their insurance. And when it comes to freezing one’s eggs, Time reports that the initial cost to women can be $5,000 to $8,000 per cycle — and that’s without the cost of eventually implanting said eggs. It’s enough to make any woman feel stuck — and that’s exactly what happens to Hahn’s character in the new film.

In one particularly poignant scene, Rachel laments that second wave feminism screwed her over. “I just feel so betrayed. All the shit I was fed in college. Feminist ideology. It was a lie that I could have a career and then have kids. Well obviously that hasn’t panned out. I should send them the bills for our IUIs and IBFs,” she spits, after yet another method to conceive has failed. And when I bring that scene up, Hahn chuckles knowingly. Rachel’s rage is quite rightfully earned. “It’s hard because there is that like feminist rallying call of like it’s your body, your choice, and it’s like yeah, but my goddamn biology actually is the reality, and it’s saying one thing: and that is ‘uh-oh.’”

In a way we were kind of told that it would all turn out alright if we put ourselves first. And it’s infuriating that we can’t (yet) best the science that tells us otherwise.

“I think we’re kind of told that we are in control of our fertility somewhat, and that’s a tough thing to feel betrayed by your own biology. It’s also a biological bummer that our chief money-making years are our most fertile. That sucks,” Hahn says. “I was excited to show a real woman’s journey through that. That it’s just not so easy. It is like there’s no end to it. That’s the thing — there’s no one there to say like, ‘stop.’ Like how do you tell someone to stop dreaming, to stop wanting that? And it costs a sh*t ton of money and there’s no insurance. The whole thing is a painful tough pickle that’s been the shadows.”

But while Private Life does a great job of showing what it’s really like for a woman confronting the cruel reality of biology’s limitations, it’s also just a thoughtful, detailed exploration of a genuinely loving relationship. “I mean I just knew it was going to land in somebody fancy’s hands,” says Hahn, referring to the fear she felt the first time she read the script, cover to cover, in her backyard. She was sure she'd get passed over for the role. “It was too beautiful, and perfect, and the writing was so gorgeous and that marriage is so beautifully drawn. It was such a perfect piece of writing.”

What’s particularly striking, of course, in a film that spends so much time talking about a woman’s fertility and her journey to have a child, is that the script doesn’t forget her partner’s responsibility in Rachel's journey. Giamatti’s Richard is involved every step of the way. Hahn says it was important to Jenkins that “he is the one who administers every [hormone] shot to her. Like they’re in it together, like that’s his contribution, otherwise he would feel lost”.

And though he’s brutally honest with her (including the time he tells her she can’t blame second wave feminism for their inability to conceive), Richard’s support feels soft and comforting — especially in the face of the aggressive masculinity on display everywhere we seem to look in 2018. “The masculinity in this movie is so gentle," says Hahn.

But for all the detail the film draws about this marriage, and the struggles that the relationship endures, Hahn cautions that the film shouldn’t be seen as a prescription or premonition for women or couples who’ve yet to procreate. “Not every person has to be a parent, not every woman has to be a mother, and also motherhood looks different for every person. Like it all doesn’t have to go down in the way that we think it’s gonna look or shake down. Everything is changing so fast, it all looks so different all the time every day,” she says.

Still, it’s just helpful to know, that however it all “shakes down” there are other humans, who occasionally create films, who get that the whole pickle — the expectations, the reality, the biology of it all — is just not as simple as it seems.

More like this
At 28, Rosie Perez Risked Her Career To Stop Playing Stereotypes
By Gabrielle Bondi
'That '90s Show' Star Callie Haverda Got Advice From Mila Kunis & Ashton Kutcher
By Brad Witter
Twitter Is Identifying With Sally Field & Jane Fonda’s Friendship In New Viral Video
By Jake Viswanath
At 28, Debra Jo Rupp Was Living A Much Different '70s Show
By Grace Wehniainen
Get Even More From Bustle — Sign Up For The Newsletter
From hair trends to relationship advice, our daily newsletter has everything you need to sound like a person who’s on TikTok, even if you aren’t.