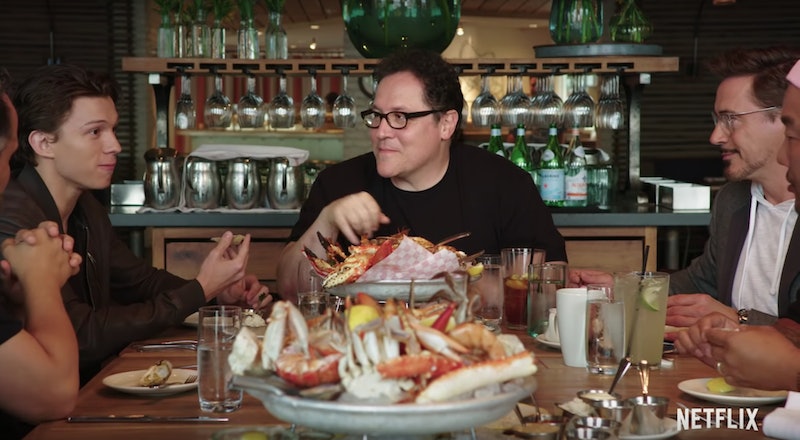 Jon Favreau and Roy Choi have reunited for a new food series — and the first trailer features some familiar faces. On May 19, Netflix unveiled a first look for The Chef Show, and it features an Avengers: Endgame reunion with notable members of the cast and crew. Inspired by Favreau’s critically-acclaimed 2014 film Chef, The Chef Show will follow director Favreau and food extraordinaire Choi as they experiment with recipes and technique. The series description reads: "The two friends experiment with their favorite recipes and techniques, baking, cooking, exploring and collaborating with some of the biggest names in the entertainment and culinary world."

Judging from the trailer, the duo make good on the promise to include big names in the entertainment industry. Tom Holland, Robert Downey Jr., Gwyneth Paltrow, and Endgame directors Anthony and Joe Russo are among those featured as they chop, garnish, and eat alongside the two food connoisseurs. Within seconds of the trailer for The Chef Show, which arrives on Netflix on June 7, viewers are graced with footage of Spider-Man (Holland) and Iron Man (Downey Jr.) slurping oysters alongside Favreau and Choi during a seafood feast. Later, fans are gifted with footage of Pepper Potts (Paltrow) peeling vegetables in a kitchen. The new food series will also feature appearances by notable culinary figures such as David Chang, Andrew Rea, and Aaron Franklin.

The Chef Show serves as an extension of Favreau’s 2014 film Chef. The dramedy follows Carl Casper (Favreau), a disgruntled chef who quits his prestigious restaurant job and launches a food truck in efforts to reclaim his passion and creativity. Choi — who rose to culinary prominence with the launch of his Kogi food truck — served as a co-producer and oversaw food preparation in the film. Chef also starred Sofia Vergara and Endgame alums Downey Jr. and Scarlett Johansson. As for The Chef Show, Favreau will executive produce and direct and Choi will co-executive produce as the two foodies embark on culinary adventures.

In a statement to Deadline, Favreau said of the new project,

"During the production of Chef, I developed a much deeper understanding of the ways in which we express our emotions, share our cultures, and seek meaningful connections through the act of cooking and eating. I am so nostalgic about that time and those experiences — this series gives me the perfect opportunity to get back in the kitchen and create some new memories."

Choi added about the series, "I've always wanted a straight up cooking show since I was a child. I grew up on Julia Child, Paul Prudhomme, Sara Moulton, and obviously Emeril's first show had a huge impact on my life. There is something timeless and beautiful about cooking straight to camera. The only snafu was, I'm not a natural born entertainer so doing it alone was always out of the question! But then I met Jon and we built such an amazing friendship over the movie, Chef. We both kinda didn’t want it to end. And through this friendship I found my cooking soulmate and a child’s dream is now a reality. Julia and Jacques meet Jon and Roy!”

Given the harrowing events put forth in Endgame, this mini Avengers reunion is exactly what Marvel fans need right now. Here's an oyster toast to The Chef Show for getting the gang back together again.

More like this
Netflix Reveals First Look At Wednesday In The 'Addams Family' Spinoff Series
By Bustle Editors
The 50 Most Powerful Characters In The Marvel Universe, Ranked
By Johnny Brayson and Nola Pfau
Lin-Manuel Miranda & Tituss Burgess React To 'Little Mermaid' Casting Backlash
By Radhika Menon
Everything To Know About The Long-Awaited ‘Community’ Movie
By Stephanie Topacio Long
Get Even More From Bustle — Sign Up For The Newsletter