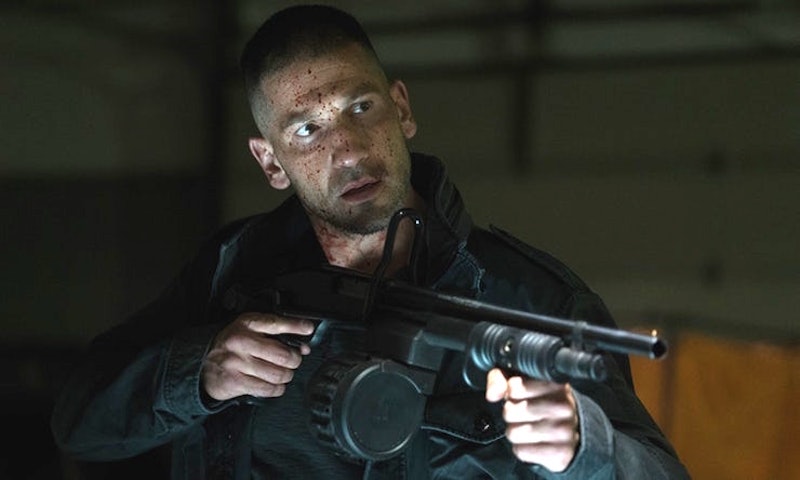 Early on Thursday, Marvel announced Netflix's The Punisher release date, and it's... interesting. The newest and most violent Marvel series will make its Netflix debut on Nov. 17. For those who aren't in the know, that's the same day rival DC Comics' heavily-hyped Justice League film hits theaters. Earlier in October, the fate of The Punisher series was unclear. According to Deadline, a graphic level of violence is integral to the Punisher character, which felt inappropriate to market at New York Comic-Con in the wake of the Las Vegas tragedy. As a result, Marvel's marketing campaign was "secretive"; only on Thursday, when full-length The Punisher trailers debuted on social media accounts, was the release date revealed.

And what a release date it is. In a month stacked with high-profile releases — studio tentpoles Thor: Ragnarok and Justice League in particular — if Netflix had committed to releasing The Punisher series, the second week of November would make the most sense. Marvel's second Thor sequel will be in wide release on Nov. 3, so super-fans would ostensibly be able to devour The Punisher series not long after. So, is the Nov. 17 release date genius or fanning the flames? What's to be gained from premiering The Punisher opposite DC Comics' Justice League film?

Though Marvel and D.C. have been competing comics powerhouses for close to a century, today's media is super-saturated by their content. There's no disco vs. punk turf war to be had; fans are allowed to enjoy properties owned by both. No one dressed like Spider-Man on Halloween is going to start a fight with a bunch of Batmen (or is the plural Batmans? Bats Men?) because separate corporations hold their copyrights. Even so, while hyping a beef makes sense, but it's cool to like things now. Both studios have had their share of successes and failures (think Wonder Woman and Batman vs. Superman, The Defenders and The Avengers). Perhaps the thought was that fans of both — or those who slightly prefer Marvel, or who prefer to stay home in jammies anyway — would choose a fun marathon of The Punisher over a screening of Justice League.

Of course, it's entirely possible that, instead of stoking a rivalry, this could be a boon for comic book fans. After all, you could see a late Thursday screening of Justice League and then spend all of your Friday night marathoning The Punisher. Or, you could watch Justice League on Friday night, and follow that up with a weekend of marathoning The Punisher. Why does it have to be one or the other when the weekend is full of so many hours?

In the meantime, whoever's running the Twitter account for The Punisher is certainly having fun with the role. Since posting the trailer on the series' page this morning, the tweeter has been retweeting effusive responses to the trailer, posting ready-made Punisher gifs, and occasionally replying to fans in character as Frank Castle. Even the band Metallica seems psyched for the Marvel series. The image of Metallica gathered on the couch, eating popcorn and watching a Marvel series on Netflix is extremely, inexplicably hilarious.

The most important thing is that fans are finally getting to see the Daredevil spin-off series starring the compelling Frank Castle, which had been teased for so long that it seemed likely we'd get a surprise release a la Beyoncé. Now that you know when to mark your calendar for, you'd better get ready for a superhero filled weekend across both major comic book companies. This can only work out great for fans hungry for more.

More like this
The 50 Most Powerful Characters In The Marvel Universe, Ranked
By Johnny Brayson and Nola Pfau
Nicola Coughlan Shared A Lady Whistledown Excerpt From ‘Bridgerton’ Season 3
By Grace Wehniainen, Alyssa Lapid and Sam Ramsden
‘The Ultimatum: Queer Love’ Is Officially On The Way
By Radhika Menon and Kadin Burnett
A New 'And Just Like That' Table Read Pic Confirms A Key Character's Return
By Jack Irvin and Grace Wehniainen
Get Even More From Bustle — Sign Up For The Newsletter