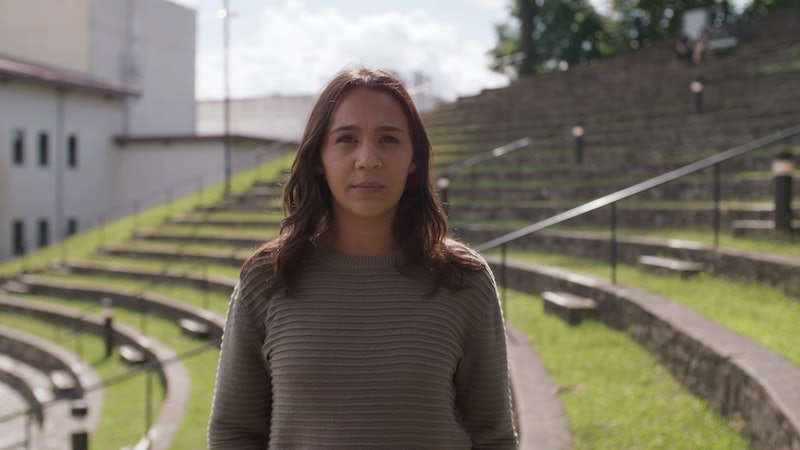 Every day, more than 130 Americans die after overdosing on opioids. The new documentary Gateway, from director Dana Richie, explores this crisis through the lens of three families of addicts whose reliance on opioids began when they were prescribed the medication by their doctors to manage pain after surgery. The film examines how routine surgeries are an often-overlooked contributor to the nation's opioid epidemic.

According to the documentary, the pathway from pain prescription to full-on addiction can be fast and easy; the film notes, 80% of heroin users started out on opioids. As a result, some doctors are choosing to forego opioids altogether, opting for other types of pain management.

"What [Gateway] represents is doctors being more thoughtful when it comes to how they prescribe [opioids]," Richie tells Bustle. "Because we do show the dangers that can happen if it gets in the wrong hands or if they're prescribed to someone who potentially could go down that path."

Gateway marks Richie's documentary directorial debut and quickly morphed from a patient testimonial campaign for an alternative pain medication to a doc diving deeper into those patients lives. "Everything that came out of the interviews was extremely emotional and very authentic," she says. "We felt that the stories just needed to be as long as they needed to be, and if it turned into a documentary then that's fine."

Those patient testimonials include Jen Wysong, a mother whose post-C-section pain management plan led her to addiction. After suffering through years of drug abuse and setbacks, Wysong has now been clean for three years, and works as a peer support counselor at the same treatment facility that supported her journey to sobriety.

Richie was also able to sit in on the peer group Wysong runs at the treatment facility. "Listening to their stories, opening up about their struggles and what their lives are like; these are all amazing women who for whatever reason, found themselves in that situation," she says.

One of the more heartbreaking stories in Gateway is that of Jennifer Weiss-Burke, whose son Cameron became addicted to opioids after a number of surgeries related to his devotion to sports. Cameron died of an overdose at 18-years-old, and his mother has since opened a recovery center for adolescents in his name in Albuquerque, New Mexico.

"She took this tragedy and was able to turn it around. Through helping others in the youth recovery center. I think it helped her feel like she's making a difference in their lives and also helped her heal too," Richie says of Weiss-Burke.

Since premiering in 2019, Gateway has won Best Director and Best Documentary Featurette from the Festigious Film Festival, as well as Best Documentary Feature from the LA Movie Awards. But for Richie, it's about the film's impact, not the awards. "The more people that talk about [opioid addiction] and the more we share this information, the more we have awareness, which will ultimately lead to prevention. The more voices we hear, the more united we become, the more we can help to eradicate this epidemic," she says.

You can watch Gateway online now. For more information on how surgery contributes to the opioid epidemic, visit Plan Against Pain.