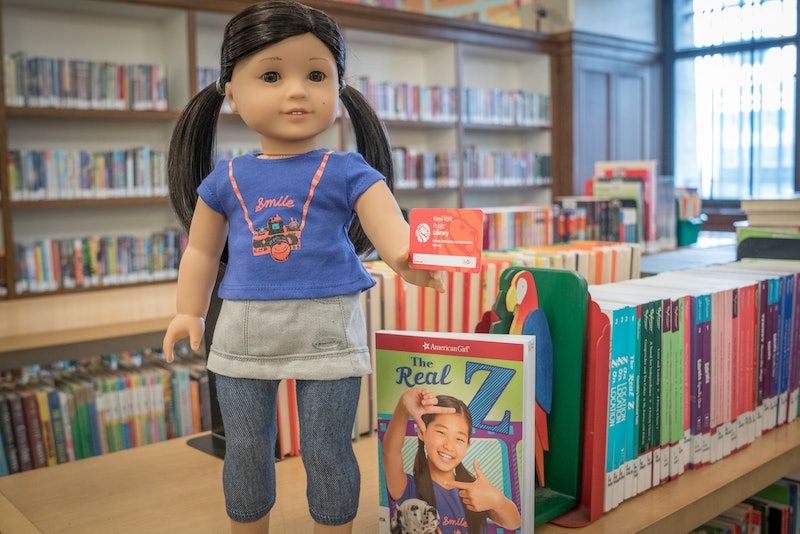 A wise aardvark once said that "having fun isn't hard when you've got a library card," and now The New York Public Library has taken those words to heart. Beginning Friday, children and teens can get free American Girl books at NYPL locations, just by already having, or signing up for, a library card. The giveaway has 100,000 books — that's $1 million worth — available at 88 NYPL locations in the Bronx, Manhattan, and Staten Island, so you'll need to act fast if you want to get your hands... I mean, your kids' hands ... on one of those sweet, free books.

Since 1986, American Girl dolls and books have brought entertaining ethical and historical lessons to millions of little girls across the U.S. Beginning with the stories of three girls — Kirsten, Samantha, and Molly — the franchise expanded rapidly, and now includes dozens of characters with stories spread from the 18th century to the modern day. In 2017, American Girl proved that there were still a few tricks up its sleeve when it announced the release of its first-ever boy doll, Logan Everett, and brought out a male-focused counterpart to its famous Body Book for Girls.

American Girl didn't just supply reading material for the NYPL's book giveaway. According to the press release, "the company also donated one doll to every New York Public Library children’s room, and a set of books to each branch to be placed in circulation." The NYPL has had American Girl dolls in circulation since at least 2004.

The giveaway not only brings together children and beloved books, but also celebrates the opening of a brand-new American Girl store in New York City. Beginning Nov. 11, Rockefeller Plaza will be home to American Girl Place, a new storefront located near Saks Fifth Avenue and The LEGO Store. American Girl Place will host a variety of events before the year is out, including six American Girl at Radio City’s Christmas Spectacular events beginning on Nov. 22, four Holiday Teas beginning Dec. 1, and a breakfast with Santa on Dec. 10.

American Girl President Katy Dickson says the company is "incredibly proud to partner with the New York Public Library to celebrate the grand opening of our new American Girl Place store at Rockefeller Plaza." She continues:

For more than 30 years, literacy and storytelling have been at the heart of what we do at American Girl, so we’re thrilled to provide a diverse selection of our popular character books to New York area children in support of the library’s ongoing efforts to encourage reading and strengthen communities.

If you can't get your hands on one of the NYPL's free American Girl books, remember: Library branches are chock-full of millions of other free books for you to take home and enjoy.