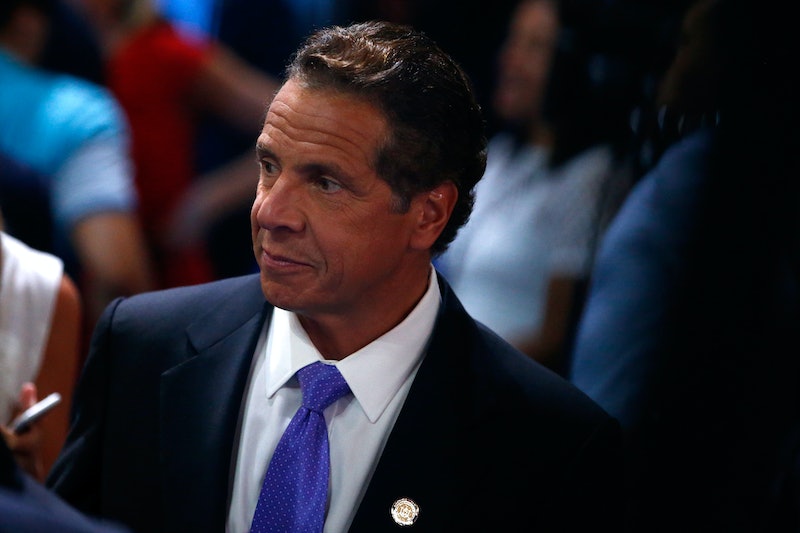 In the last few weeks, Americans have seen President Donald Trump sign into law various executive orders. Just days into his term, he began restricting reproductive rights for women worldwide by banning foreign aid to abortion providers and advocates. Not to be left out, senators began introducing legislation that would further prohibit women from obtaining abortions through a national heartbeat bill and HR-7, which would codify the Hyde Amendment. Luckily, not all elected leaders are interested in restricting women's rights. On Monday, New York Gov. Andrew Cuomo moved to uphold Roe v. Wade by proposing an amendment to the state's constitution.

At a Planned Parenthood rally in Albany, Cuomo said:

I propose today a constitutional amendment to write Roe v. Wade into the New York state constitution so that nobody can change it, no Supreme Court nominee, because we're going to protect a women's right to choose in the state of New York. Let's put it on the ballot and let's let the people decide because this is a state of democracy and New Yorkers want to protect a women's right to choose.

New York residents have made their position on abortion loud and clear during the Women's March on Washington, which also included a sister march in the city.

According to the Guttmacher Institute, in 2014, 1,671 facilities provided abortions throughout the United States, and 218 of them were in New York. That's about 13 percent of the country's total number of facilities. Nationally, a majority of Americans support legalized abortion. Also, as of January, seven in 10 Americans oppose overturning Roe v. Wade. In Gov. Cuomo's proposal to solidify the right to abortion under Roe v. Wade in New York state, he is representing the interests of his constituents, as well as the nation.

Cuomo's decision to defend reproductive rights for women in New York comes right before Trump announces his Supreme Court nomination. Speculation has arisen that a conservative appointment in the highest court could assist in overturning the 1973 ruling that allows abortion to remain legal nationally up to around week 24 of pregnancy, and later if the life or health of the women is threatened.

According to Reuters, New York's state law on abortion was established in 1970, and though it does allow for legal abortions up to week 24 and exceptions for the women's life, it does not specify exceptions for the health of a woman. In the big picture of abortion, that doesn't sound like a huge change, but it's an important effort that Cuomo is making to ensure the right of the women in his state can access safe, legal abortions. Handing that decision to voters, even if it would take some time to get onto ballots, is the right move for the Democratic state.