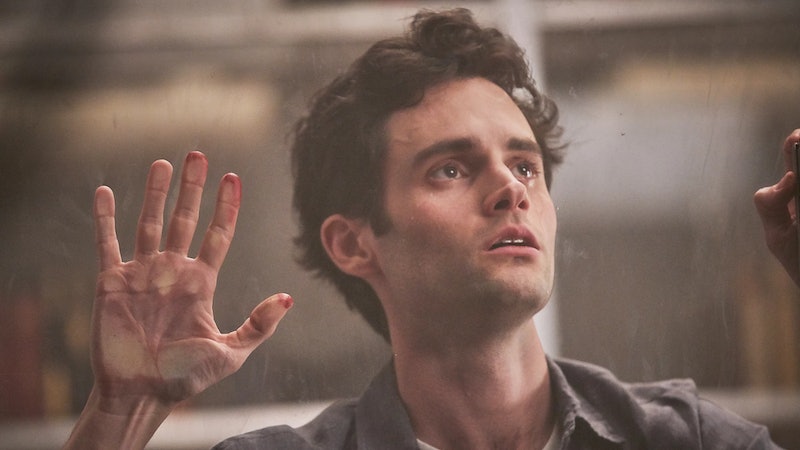 While loyal followers of the Netflix series YOU await the eagerly anticipated Season 2, here's some news to tide them over. There will be two new YOU books in the popular thriller series. A third and fourth book from author Caroline Kepnes and publisher Random House are set to hit shelves, per Entertainment Weekly.

Just like a second season of the hit TV series, there is no official word yet on when books three and four will be released. But EW also reported that the third book will see lead character Joe (creepily played by Penn Badgley in the television adaptation) "move to the Pacific Northwest with a plan to become a family man in his own unique way." As fans try to scramble to decipher what that might mean for the upcoming season and beyond, it's important to take stock of Joe's journey so far.

Season 1 premiered on Lifetime in September 2018, based on the 2014 novel of the same name by Kepnes. While the series took some departures from its source material, it still followed Joe, a New York-based bookstore manager who ends up stalking the woman he loves Guinevere Beck (Elizabeth Lail). Netflix picked up the series in December 2018 for streaming rights, and the show became a binge-worthy psychological hit. YOU made such a splash that Netflix announced that upwards of 40 million households had streamed YOU in its first month on the platform. Fans were left begging for answers after the cliffhanger revealing Joe's presumed dead ex-girlfriend Candace is actually still alive.

Candace being alive was one of the more major differences between the book and show, which led viewers to believe that if Season 2 were to be based on the 2016 sequel novel Hidden Bodies, there would be room for adaptation. With the sequel novel taking place in a world where Candace is definitely dead, Season 2 is sure to shake up what fans of the books know about the central characters.

But two new books will surely inspire upcoming seasons of the series. Little is known about the future of YOU beyond a season 2 renewal (trailer soon, please!), but one has to believe Kepnes could've been inspired to continue the saga based off of the rapturous response to her characters on TV. Plus, these are presumably the first books Kepnes will be writing after seeing public response to the Netflix show. The possibilities feel endless moving forward.

Deadline reported in November that "his search for love takes him to Hollywood where dreams can be made or shattered." Additionally, he's got a new object of his affection in Love Quinn (played by Victoria Pedretti from Haunting of Hill House). So, with a new geographic location for book number three, will a new love interest follow? Per usual with these unpredictable characters, there are bound to be more questions than answers.

No matter what new developments come, fans are adding these new books to the long list of YOU-related material they are craving. Book announcement today, Season 2 release date tomorrow? Fans can only hope for more info soon.

More like this
The First 'Percy Jackson & The Olympians' Teaser Comes With An Ominous Warning
By Grace Wehniainen
Viserys’ Fate On 'House Of The Dragon' Could Differ From The Book In This Surprising Way
By Grace Wehniainen
The ‘Emily In Paris’ Season 3 Release Date Is Here, Plus The First Footage
By Bustle Staff
Devi Is Going To Meet A “Smoldering Bad Boy” In ‘Never Have I Ever’ Season 4
By Jack Irvin and Gabrielle Bondi
Get Even More From Bustle — Sign Up For The Newsletter