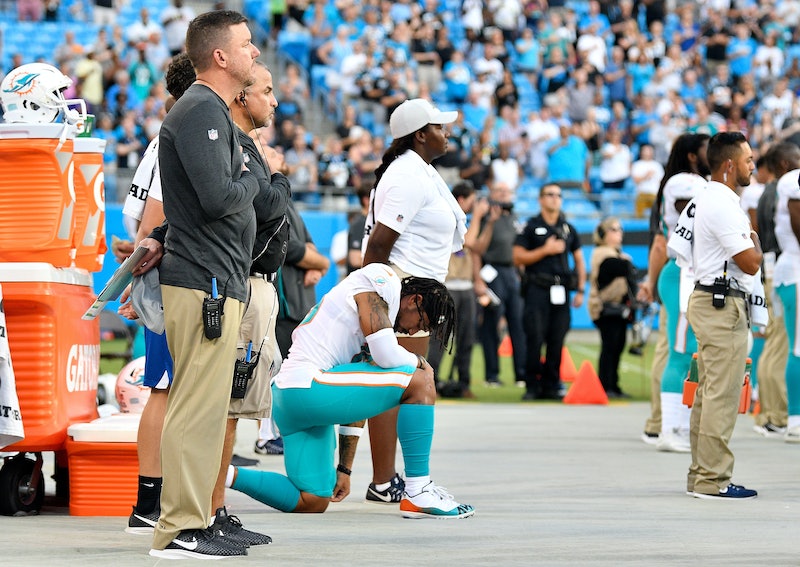 Nike advertisements featuring NFL star Colin Kaepernick nearly stole the controversy from game itself — but not for long. As of Sunday, football is fully back in season, and NFL week one saw national anthem protests feature players taking a knee to speak out against racial inequality, systematic oppression, and police brutality. Kaepernick, who began the peaceful protest in 2016, tweeted his support for this year's first protestors.

"My Brothers @kstills and @ithinkisee12 continue to show their unwavering strength by fighting for the oppressed!" Kaepernick wrote, tagging the Twitter accounts of the Miami Dolphins' Kenny Stills and Albert Wilson, who both knelt before their game against the Tennessee Titans. "They have not backed down, even when attacked and intimidated. Their courage will move the world forward!"

He also seemed to quote himself: "Love is at the root of our resistance." Kaepernick used the phrase as a refrain in one of his first major speeches on the protests at Amnesty International, drawing attention to many Americans of color killed by police.

The protests have continued unabated since Kaepernick first sat during the anthem and then later decided to kneel during the 2016 season. The move was attacked by then presidential candidate Donald Trump and has continued throughout his presidency, with Trump regularly attacking Kaepernick individually and the protests more generally.

A recent Nike ad featuring the football player upped the ante and led some Americans to burn their shoes in protest. The president also attacked the sports gear giant.

"Just like the NFL, whose ratings have gone WAY DOWN, Nike is getting absolutely killed with anger and boycotts. I wonder if they had any idea that it would be this way? As far as the NFL is concerned, I just find it hard to watch, and always will, until they stand for the FLAG!" Trump tweeted last week.

The issue is more complicated for the NFL, though. Kaepernick took the league to arbitration, alleging that teams colluded to keep him from playing for starting the protest. The case has moved ahead to what is akin to a hearing, a win for Kaepernick. The NFL had hoped the case would be dismissed by the head arbitrator. The hearing should take place by the end of the season, but no date has been set.

The league also tried to put in place a rule that would fine players for not standing during the playing of the national anthem, but they backed off in July. The proposed compromise was to make players stay in the locker room during the national anthem or, if on the field, stand. But critics said that caved to arguments that the protest wasn't patriotic.

Kaepernick said the protest was never about the military. "When there’s significant change and I feel that flag represents what it’s supposed to represent, and this country is representing people the way that it’s supposed to, I’ll stand,” he told the media back in 2016.

The continued protests — and Kaepernick's praise of them — suggest that hasn't happened yet.