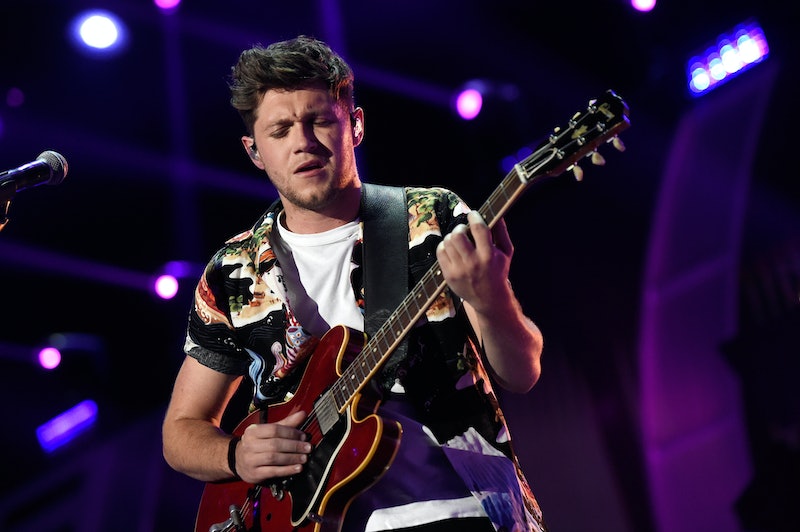 It's comforting to see that Niall Horan's solo album, Flicker, is continuing his former band's positive message to female listeners, complete with Horan's song with feminist inflections "Fire Away." It forms a compelling argument that beta males make for better partners, with nothing aggressive or confrontational about the story of a man's appeal to his lover to tell him what's bothering them. It's a respectful request that never veers into the territory of an outright demand.

The song starts by establishing a relationship that already seems hopeful. While the singer's partner claims to be alright, Horan sings, "I can see it through your fake smile, you're not." With deft strokes of the brush, he paints a picture of the character addressing the "you" in the song, a character that just so happens to overlap a lot with the dream One Direction boyfriend. He knows his partner inside out. He's not fooled by the smiles they force for other occasions, like in response to their co-worker's lame jokes. He's not afraid to be sensitive, referring to the pent-up sadness he can see in his partner's face as "a reservoir in your eyes."

Best of all, he actually just comes out and asks it: "What's wrong?" The chorus forges a promise between singer and listener: one of unconditional support, regardless of what the secret the partner is too afraid to reveal is. He acknowledges the physical heaviness of carrying around a story you're scared to divulge in the line, "Darling, you don't have to hold it." When a few verses later, he croons, "You can go ahead and unload it," it seems to imply that he, your Former One Direction Dream Boyfriend (FODDB?), will help you shoulder the burden.

If at this point, you're feeling a little claustrophobic, don't fret. In the second verse, Horan waxes lyrical about giving his lover however much space they need. He tells them to "hold me close, even at a distance," suggesting that he's not an out of sight, out of mind sort of guy, but instead that he's happy to give whomever he's with space to breathe whenever they feel the need for it. He reassures them that, yes, he's there, and he's tuning in: "Thinking that I never listen, but I do." The Irish singer ends on a note of hope, suggesting that, even in a dark time, their relationship is rock solid with, "You might be lost but I ain't losing you."

Probably the most joyful aspect of the song is its acknowledgment of how imperfect communication in romantic relationships can be. In the bridge, Horan admits, "Even if I don't understand, you can talk to me." Even this is soothing, somehow — he's not portraying himself as an all-knowing savior who can rescue his lover from their issues. He's depicting himself as fallible, but constant in his affection and willingness to be there and listen.

Of course, these are the basics of being in a healthy relationship: being supportive, staying present, and listening. But to have this form the focus of an entire pop song by a young male artist feels vaguely radical. To compare it with other October 2017 releases, this isn't a track about intense, destructive love like Maroon 5's "Whiskey," where Adam Levine sings, "Realizing I was in too deep/She was a lesson/I had to learn." Neither is it a passive-aggressive take on wild sex à la former bandmate Liam Payne's "Bedroom Floor," which contains the couplet, "You said it was over/But your clothes say different on my bedroom floor." No, this is about respecting your partner's need for space, appealing, not demanding, for the reasons why they seem down, and treating them as an equal, even if that's inconvenient for you.

If you're ready for the fictional audio lover you deserve, hit play on "Fire Away" one more time. This is the love song you've been waiting for.

More like this
Adam Levine Denies Having An Affair — But Admits He “Crossed The Line”
By Jake Viswanath and Radhika Menon
Kanye West Apologizes To Kim K "For Any Stress I Have Caused" In Rare Interview
By Jake Viswanath
6 Dating App Tips To Try If You're Looking For A Serious Relationship
By Lexi Inks
Wanna Try Hinge's New Video Prompt Feature? Here Are 7 Tips
By Lexi Inks
Get Even More From Bustle — Sign Up For The Newsletter