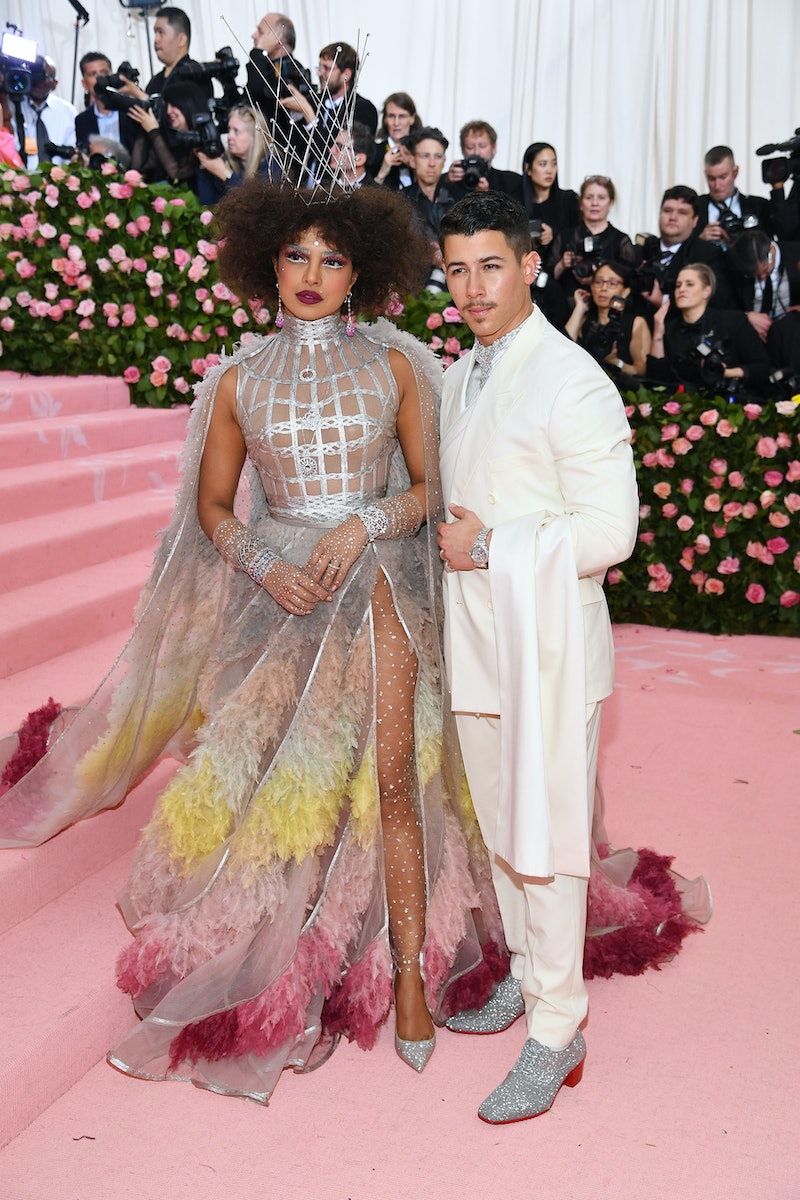 The first Monday of May brought the goods during the annual Met Gala on May 6 in New York City. This year's theme, camp, led celebs to dress up and accessorize in extravagant and over-the-top ways, and needless to say, Twitter loved it. Fans online immediately began judging outfits and making comparisons, some rightfully pointing out that Nick Jonas looked exactly like GoT's Littlefinger at the 2019 Met Gala. And his new sister-in-law, and Game of Thrones star, Sophie Turner had the best reaction when Jonas pointed out the resemblance on Instagram.

Spoiler ahead for Game of Thrones Season 7. After a gaggle of fans noted that Jonas looked like Littlefinger, aka Petyr Baelish (Aidan Gillen), on Twitter, the musician seemed to hint that his outfit may have been inspired by the now-deceased Master of Coin, whom Sansa (Turner) ordered dead in Season 7, on Instagram. Jonas shared a side-by-side photo of himself with Littlefinger, both sporting expertly shaped goatees, with their hands placed in front of their torsos, and mischievous looks in their eyes. The post showed just how closely Nick resembled the fictional character who often manipulated his sister-in-law's character on Game of Thrones, and Jonas played along with the comparison, captioning the photo, "Sansa... We must protect the vale. #metgala#littlefinger."

Turner played along too, commenting on Jonas' Instagram post, "Quit trying to manipulate me...... Ugh I thought you died last season." The comment most likely just demonstrates the Jonas brothers and sisters' outrageously fun dynamic, but it's also hard not to note that Turner's comment sounds a lot like one of the major Game of Thrones Season 8 fan theories that suggests that Littlefinger actually didn't die.

Game of Thrones fans, ever the master conspirators, began guessing that Petyr might come back to Westeros way before Season 8 premiered, while the anticipation for the final season was ramping up in the winter. In 2018, Reddit user MrSilenceT posted a theory which suggested that Littlefinger had learned that his attempt to kill Bran (Isaac Hempstead Wright) would be revealed to the other Starks once they reunited, so he'd had time to plot a way out of Sansa's inevitable retaliation.

One scene in particular supports MrSilenceT's theory that Littlefinger managed to fake his own death when Arya (Maisie Williams) supposedly killed him in Winterfell. In Season 7's fifth episode, Littlefinger handed a coin to a young woman who says to him, "Your time is up." Perhaps that coin had paid for the Faceless Man to take his place while the real Littlefinger got away.

Nick likely didn't plan his entire Met Gala look — which complemented his wife's gorgeous ensemble — in some elaborate scheme to hint at a Game of Thrones theory, of course. But it is fun to imagine, especially since the Jonas Brothers have previously expressed their own GOT fandom on social media.

Whether or not Littlefinger returns to attempt to quietly control Sansa or someone on the current season of Game of Thrones remains to be seen. For now, Nick Jonas did a pretty good job of cosplaying as him for the Met Gala.

More like this
Alicent's Green Dress In 'House Of The Dragon' May Be An Act Of War
By Kadin Burnett
Nicola Coughlan Shared A Lady Whistledown Excerpt From ‘Bridgerton’ Season 3
By Grace Wehniainen, Alyssa Lapid and Sam Ramsden
An 'Everything Everywhere All At Once' Star Just Joined The 'Loki' Season 2 Cast
By Grace Wehniainen
The New Bachelor Will Be Announced Next Week & Here Are The Top Contenders
By Grace Wehniainen
Get Even More From Bustle — Sign Up For The Newsletter