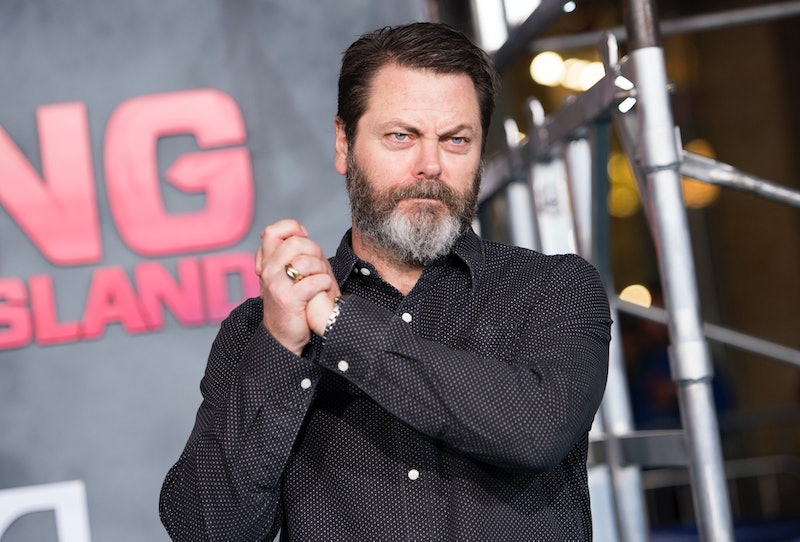 Leave it to the man who brought Ron Swanson to life to put an end to the "what makes a man a 'real man'" debate. While talking with Men's Health about how he plans to use woodworking to give back, Parks and Recreation's Nick Offerman flawlessly debunked what it means to be a "man's man." And according to Offerman, his masculinity has nothing to do with his flannel shirts, craftsmanship, or having extravagant facial hair.

It's silly when you think about how society uses "gender norms" to decide whether or not someone's masculine or feminine enough. "Blue is for boys" and "pink is for girls" is an extremely inaccurate and outdated way of thinking.

In the interview, Offerman first talked about how craftsmanship as an example of something that shouldn't be divided along gender lines. He said, "I’m careful about the definition of manly. Making anything with one's hands is a very healthy pursuit." He continued, "We have a lot of great women in woodworking and there are plenty of men I know who are talented knitters. Stereotypically, those activities are not what you’re not supposed to do with your gender, but the world of craftsmanship doesn’t fall into neatly drawn gender lines."

On Parks and Recreation, Offerman's character, Ron Swanson, is the epitome of what a people stereotypically think a "real man" is. He is tough, the ultimate handyman, and doesn't quite believe in "feelings." So to hear that the actor behind the role doesn't try to live up to any of those standards is pretty cool. For Offerman, being in touch with his emotions is actually what he thinks makes him more of a man than anything.

After being asked about being known as a "man's man", Offerman said:

I went to theatre school. I took two semesters of ballet. I’m the sissy in my family. I cry with pretty great regularity. It’s not entirely accurate to equate me with manliness. I stand for my principals and I work hard and I have good manners but machismo is a double-sided coin. A lot of people think it requires behavior that can quickly veer into misogyny and things I consider indecent. We’ve been sold this weird John Wayne mentality that fistfights and violence are vital to being a man. I’d rather hug than punch. Crying at something that moves you to joy or sadness is just as manly as chopping down a tree or punching out a bad guy.

What moves Offerman to tears, you ask? Well, seeing Alicia Keys belt out her life's emotions onstage will definitely do the trick. The actor revealed that while attending a recent performance by the "Girl on Fire" singer, he and his wife couldn't help but shed a few droplets. According to Offerman, he had "no shame [about crying]," either.

Hyper-masculinity, or the idea that a man should in no way resemble a woman, as the Huffington Post's Louis Michael described it, didn't end during the woman's suffrage movement. In fact, it's still a huge problem today. Offerman's portrayal of Ron, though satirical, is a perfect example as to how a man's hyper-masculine view of the world only oppresses him in the long run.

For Ron, having a tough outer shell is what he believed made him a leader. And as a result, he found it especially hard to be emotional, or vulnerable at times. Hell, he even fought tooth and nail to keep his locally famous jazz persona Duke Silver a secret, out of fear that he would lose respect among his peers. As time progressed, the head of the Parks and Recreation department eventually let his guard down long enough to fall in love with and marry Diane Lewis. But one can't help but imagine how much the television character would have grown had he let go of society's laws of masculinity or femininity a lot sooner.

Thank goodness Offerman isn't afraid of wearing his emotions on his sleeve, in real life. He continued in the interview, "If you live your life openly with your emotions, that’s a more manly stance than burying them." And he couldn't be more right.

It's time to let go of everything you've been taught about what makes someone a "real man" or "real woman." Because as Offerman is helping teach the world, none of that nonsense matters when it comes to living out your best life.

More like this
UK Viewers Will Have To Wait To Watch The Handmaid’s Tale S5
By Maxine Harrison
'Grey's Anatomy's New Intern Got Advice From Dr. Bailey Herself
By Grace Wehniainen
Paul Mescal, Man Of Mystery
By Samantha Leach and Heather Hazzan
The 'Reasonable Doubt' Cast Includes A 'Save The Last Dance' Reunion
By Grace Wehniainen
Get Even More From Bustle — Sign Up For The Newsletter