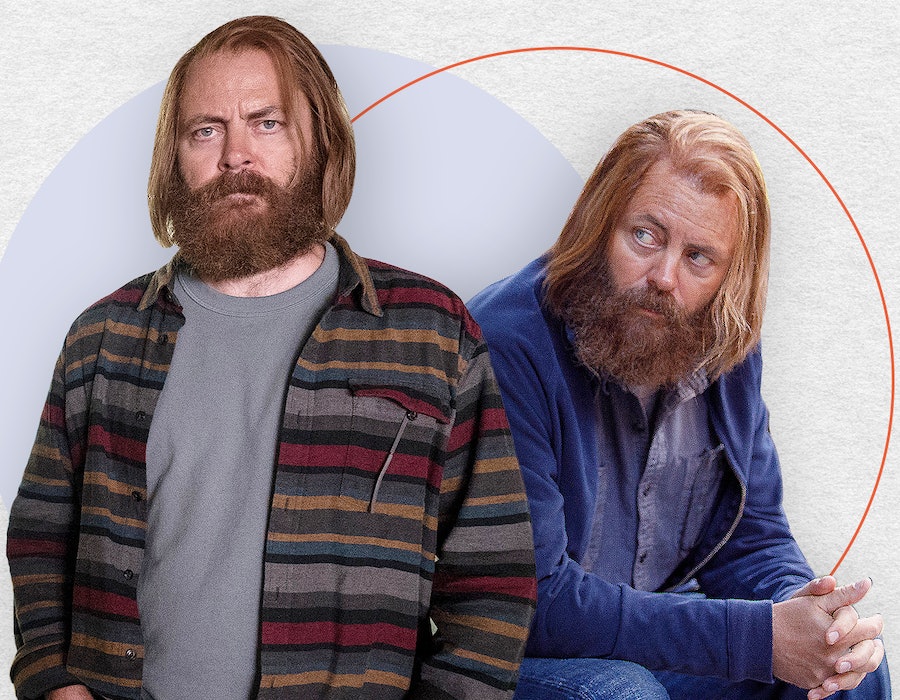 During his All Rise comedy tour last November, I watched Nick Offerman deliver a perfectly deadpan rendition of "I'm Not Ron Swanson," a cheeky ode to his steak and scotch-loving Parks and Recreation character that reminds listeners, "If I had to live like him, I'd be dead within a year." The performance was primarily an exercise in self-awareness: Offerman understands that most of his fans associate him with the gruff, eremitic government department head he embodied for seven seasons. He also understands that sometimes, you have to eat a piece of fruit.

Offerman's role in Devs — an entrancing new sci-fi series from Ex Machina's Alex Garland — allows him to further detach from his Parks and Rec persona. He plays Forest, a foreboding Silicon Valley savant haunted by the death of his young daughter and driven to high-level tech as a means to rectify his grief. You could call him the anti-Ron Swanson: Forest has long blonde hair and an unruly beard, eats plain mixed greens, and wears a smart watch. Ron threw out his computer after learning Google Earth knew his address.

But to end the comparison there would be an oversimplification. Forest and Ron do share a few key traits. "They're both just under six feet tall, they're both very affectionate toward their families, and neither of them suffer fools gladly," Offerman tells Bustle. These qualities just manifest in deceptively different ways.

Whereas Ron's tough exterior masked a sweet interior, Forest is outwardly kind, moping around with wide, worried eyes and instilling a false sense of comfort in his employee Lily (Sonoya Mizuno) when her boyfriend Sergei (Karl Glusman) mysteriously dies. In this case, Offerman's association with Ron works to his advantage: seeing Forest as inherently good establishes an immediate trust with the audience. Which is why watching him stand emotionlessly as his henchman suffocates Sergei for stealing data from their supercomputer in the pilot episode feels like such an extreme betrayal: the best way to destabilize someone is to invade their core assumptions.

Devs feeds into this throughout the season, shaping Forest into an empathetic figure who isn't outright sinister so much as he is tortured. A massive statue of his late daughter looms over the campus of his tech company, creating a physical representation of his all-consuming pain. That you feel so deeply for him only further blurs the boundaries between Forest and Ron; you want so badly to believe in his goodness, you begin to look for ways to rationalize his compromised ethics.

Which is the same line of thinking that landed Forest in this position. Though he genuinely believes what he's doing is in service of the greater good, he has to do a great deal of moral gymnastics in order to justify his actions. Keeping a clean conscience is entirely reliant on his faith in determinism: if everything has been prescripted, his choices aren't truly his own, nor is the pang of guilt slowly corroding his stomach.

Offerman suspects there's a part of Forest that realizes he has more responsibility than he's willing to accept, but ultimately, where Forest falls on the scale between good and evil "depends on who's doing the adjudicating." If one is good and 10 is evil, Offerman would place his character at a middling six, but Ron tends to see things in simpler terms. He might put Forest at a 10 just for owning a quantum computer.

More like this
The First Trailer For 'That '90s Show' Includes So Many Nods To The Original Series
By Jack Irvin, Alyssa Lapid and Grace Wehniainen
Elizabeth Debicki On Her Approach To The Most Debated Scene From 'The Crown'
By Grace Wehniainen
Kit Connor Speaks Out On “Shocking” Lack Of Bisexual Representation
By Sam Ramsden
Nicola Coughlan Just Shared A Major Update About 'Bridgerton' S3
By Sam Ramsden
Get Even More From Bustle — Sign Up For The Newsletter