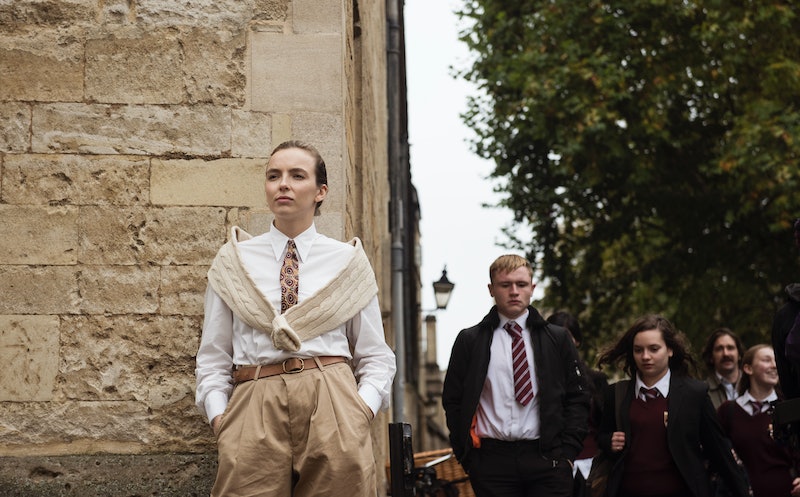 Spoilers ahead for Episode 5 of Killing Eve Season 2. It's painfully obvious that Villanelle doesn't understand personal boundaries — she often drops by unannounced to see Eve, or worse, stalks her from afar. But in the May 5 episode, it's Eve's husband who's treated to an impromptu drop-in, and Villanelle's meeting with Niko is actually quite revealing. Not only is Niko not intimidated by the Russian assassin, but actually threatens her, implying that there may be more to this Polish math teacher than he's been letting on.

In an ill-advised move, Eve decides to enlist Villanelle's help to interrogate The Ghost, putting a hit out on herself to lure the killer-for-hire to her house. As a result, Carolyn pulls some strings to send Niko up to Oxford to help chaperone a spelling bee, thus removing him from harm's way. But of course, Villanelle shows up anyway. And though Niko doesn't know what she looks like, he quickly realizes who she is when she turns to him and says, "I'm sorry about the complaints." (As you'll recall, she's been pretending to be a student at Niko's school and calling to make unfounded accusations about him.)

As it dawns on Niko who he's looking at, Villanelle continues, "Don't look so angry! I was just trying to get Eve's attention, but she does not care about your life at all, does she?" This is, unfortunately, true, as we saw in Season 2, Episode 3, when the MI6 agent reluctantly went to an event at her husband's school. It's obvious that Villanelle doesn't have the highest opinion of Niko, telling him that he looks like "someone stuck a mustache on some fudge."

It's also clear that Villanelle has been trying to undermine their marriage, and as she continues talking about Eve, Niko becomes furious, shoving her up against a wall. "I didn't know you had it in you — good for you!" Villanelle responds, amused. "You should try this with your wife." Niko, however, does not find it funny. "Don't you dare talk about my wife, or I will kill you!" he hisses. He's obviously trying to protect Eve, but his bold response calls his past into question. For instance, what was he doing before he became a math teacher, and why isn't he more afraid of Villanelle? Although he doesn't know the gory details of what she's capable of, he certainly remembers that she was trying to kill his wife not too long ago.

Fans may have forgotten that Niko and Eve met once before — albeit very briefly. Villanelle showed up at the Polastri's flat in Season 1, Episode 5, and had Eve backed up against the fridge with a kitchen knife, much in the same position we see Niko and Villanelle in during the May 5 episode. Just then, Niko and a friend entered the apartment, and Villanelle told the two men in a British accent, "Hi! I'm sorry, I'm just leaving." Of course, this was after she'd waterboarded Eve in the bathtub, and Eve in turn had held Villanelle at toilet brush-point, so it'd been a tumultuous evening. But Niko didn't know any of this at the time, assuming Villanelle was just some acquaintance of his wife.

So what do we know about Eve's husband, really? According to his character bio on the BBC America website, Niko was born in England to Polish immigrants and "grew up on the wrong side of the tracks." Furthermore, his bio details that he "has an aversion to violence, and can't understand Eve's fascination with darkness and criminality." However, this doesn't sound like the guy who shoved a woman up against a wall and threatened her, pressing his forearm up against her neck.

Villanelle seemed impressed by Niko's response — is it possible she'll develop an infatuation with him, too? Considering she pretty easily tricks and manipulates people, she seems to like those that challenge her, and Niko, like his wife, has done that. Or perhaps Niko will become more invested in Villanelle's case — he's been pretty disinterested in Eve's work on her so far, but now that the assassin has infiltrated their lives even further, he may want to get more involved. Whatever the case, it's sure to make things interesting.

As for whether or not Niko has a darker side we're just now seeing or if he's just being protective over Eve, it's too soon to tell. But it's no secret that their marriage is heading down the toilet, so maybe he's getting desperate.

More like this
Devi Is Going To Meet A “Smoldering Bad Boy” In ‘Never Have I Ever’ Season 4
By Jack Irvin and Gabrielle Bondi
This House of the Dragon Character Will Create Another Scandal For Rhaenyra
By Kadin Burnett
Nicola Coughlan Shared A Lady Whistledown Excerpt From ‘Bridgerton’ Season 3
By Grace Wehniainen, Alyssa Lapid and Sam Ramsden
New ‘Lupin’ Part 3 Teaser Hints That Assane Will “Go Out In Style”
By Brad Witter
Get Even More From Bustle — Sign Up For The Newsletter