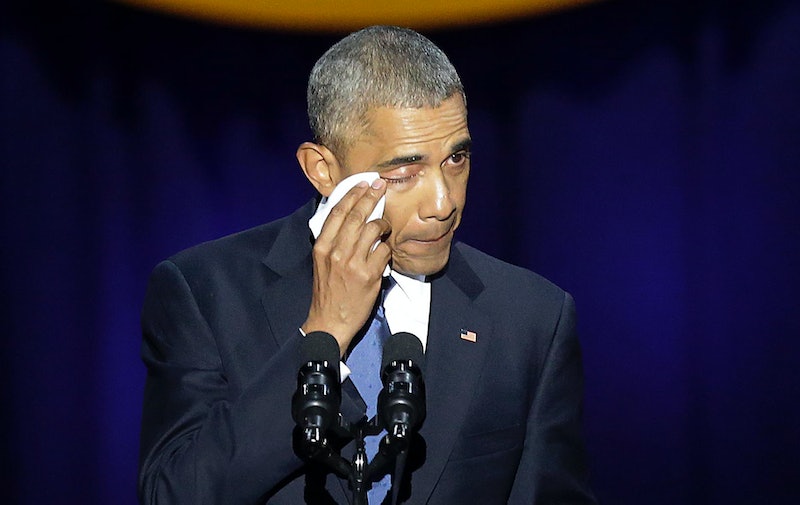 President Obama delivered his final speech as POTUS on Tuesday to a lively crowd of 2,000 who witnessed his remarks in person, and millions more watching from home. A tradition that dates all the way back to George Washington, the farewell address has often been used as a moment to reflect on a president's tenure, while also looking to the challenges that lie ahead. And Obama did just that, highlighting his achievements over the past eight years before focusing the lion's share of his speech on the tenuous state of our democracy. Calling out threats to stability by name, Obama emphasized the need for understanding and solidarity across all divisions. Being the first black president of the United States, Obama's insistence that we are more united than divided gives his words added historic weight.

Coming on the heels of a close and bitterly-fought election, Obama made the case for unity. It was a boldly gracious move, especially considering that he and his party have often been the explicit target of far less conciliatory treatment from the president-elect. Yet Obama seemed focused on a much larger picture: the ability of our democratic system to not only survive, but thrive, despite the multitude of challenges against it. These are ten of the most timely and moving lines from Obama's speech.

Chicago Is The Place That Shaped Obama's Political Outlook

It was on these streets where I witnessed the power of faith, and the quiet dignity of working people in the face of struggle and loss.

Obama's reflection on how his early years in Chicago helped shape his understanding of America was more than just personal backstory. It formed the underlying argument for what would be a theme throughout the speech: his continued optimism in America, despite seeming setbacks, a lesson he learned from his organization efforts in Chicago.

Americans' Constitutional Rights Affirmed, As Well As Our Role In Defending Them

It’s the insistence that these rights, while self-evident, have never been self-executing; that We, the People, through the instrument of our democracy, can form a more perfect union.

Again, Obama prefaced at the beginning of his speech what he later introduced as his main topic: the state of our democracy. Our rights are fundamental and inalienable in an abstract sense; but it is the duty of citizens to ensure they are upheld.

The Historic Scope And Breadth Of American Sacrifice

It's [call to citizenship] what pulled immigrants and refugees across oceans and the Rio Grande. It's what pushed women to reach for the ballot ... It's why GIs gave their lives at Omaha Beach and Iwo Jima; Iraq and Afghanistan — and why men and women from Selma to Stonewall were prepared to give theirs as well.

Obama argued that the unifying theme underlying such diverse historic acts of courage was a felt duty and desire to participate in our democracy. On multiple occasions throughout Obama's speech, he extolled the virtuous role of the "citizen" — in all its iterations.

... when we say America is exceptional. Not that our nation has been flawless from the start, but that we have shown the capacity to change, and make life better for those who follow.

This was an unapologetically patriotic speech. Obama maintained, time and again, that progress has been made, that this is a great country, even given the way many currently feel. On a message of hope he came into office, and it seems Obama wanted to leave on the same uplifting note.

Economic Anxiety And Inequality Are Threats To Democracy

The laid off factory worker, the waitress or health care worker who’s just barely getting by and struggling to pay the bills. Convinced that ... their government only serves the interest of the powerful. That’s a recipe for more cynicism and polarization in our politics.

That people are less likely to engage in, or trust at all, the political system when they feel cheated by it makes perfect sense. And right now, there is a tremendous amount of bitterness on both sides about what is often viewed as a "rigged" system. This is anathema to civic engagement and good governance.

Racial Tension Listed As Another Threat To Stability

If we’re unwilling to invest in the children of immigrants, just because they don’t look like us, we will diminish the prospects of our own children — because those brown kids will represent a larger and larger share of America’s workforce.

Obama criticized the way many issues have been "framed," as a "zero-sum game" between whites and other minority groups. He rightly pointed out that our failure to provide all Americans - especially the young - with learning and career possibilities will be devastating to us all.

Political Echo Chambers Have Got To Go

For too many of us it’s become safer to retreat into our own bubbles, whether in our neighborhoods, or on college campuses, or places of worship, or especially our social media feeds, surrounded by people who look like us and share the same political outlook and never challenge our assumptions.

Laying blame on both sides, Obama challenged Americans to get outside their own curated comfort zone, and engage with people of different political stripes.

Ideas & Facts Matter, And They Should Override Partisanship & Spin

But without some common baseline of facts, without a willingness to admit new information and concede that your opponent might be making a fair point, and that science and reason matter, then we’re going to keep talking past each other.

The deluge of "fake news" and the insistence, on the part of some media surrogates, that certain facts are actually just debatable opinions has poisoned civil discourse. Logical argument is the name of the game for any healthy democracy, and America needs to rediscover her commitment to reason over rank partisanship.

We Still Have Nothing To Fear But Fear Itself

But, protecting our way of life, that’s not just the job of our military. Democracy can buckle when it gives into fear. So just as we as citizens must remain vigilant against external aggression, we must guard against a weakening of the values that make us who we are.

Obama spoke of the fear many have of terrorism, and how that fear is sometimes directed towards innocent and peaceful fellow citizens. "So let’s be vigilant, but not afraid. ISIL will try to kill innocent people. But they cannot defeat America unless we betray our Constitution and our principles in the fight." Referencing the great contributions of diverse waves of immigrants, he pleaded with Americans to respect different religious views as well, highlighting Muslims in particular.

President Obama ended the formal part of his speech by calling on all Americans to get involved in the political process, to hit the pavement and make a personal stand. He emphasized again that this is the responsibility entailed in the "highest office" - that of citizen. I'd encourage everyone to read the full transcript, as his article highlights just a small sampling of Obama's most poignant remarks.