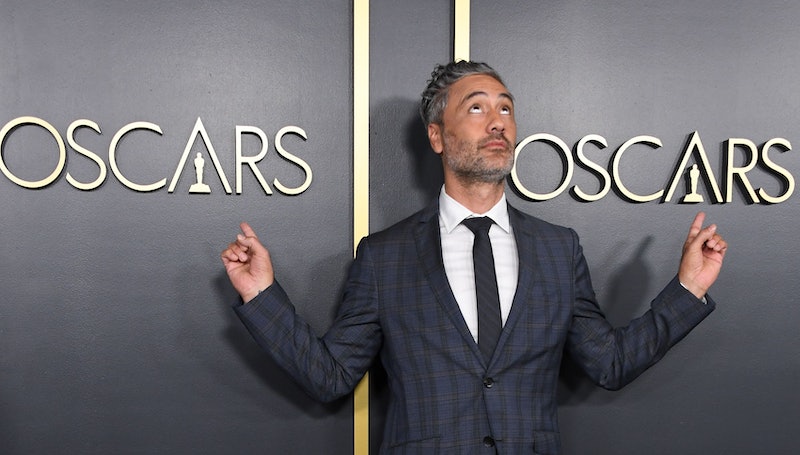 Oscars night is almost here, meaning that every awards season guru is frantically making their guesses on who will take home the gold, including the Academy itself, apparently. Some Oscars predictions appeared on the Academy's official Twitter account on Monday, Feb. 3, but despite what it may have looked like, the Oscars didn't accidentally reveal this year's winners on Twitter. Rather, the Tweet was the result of a major glitch on the social network.

On Monday, as reported by Entertainment Weekly, the Academy of Motion Picture Arts and Sciences' Twitter account posted a photo that had the title "My Oscars Predictions" as well as a full list of, well, predictions for who would win on Oscars night. Film fanatics immediately started speculating that the show had just spoiled this year's winners, or that their Twitter account had been hacked. The Tweet was deleted quickly after the outcry.

Shortly after the list was taken down, the Academy issued another tweet explaining that the post was actually was a glitch on Twitter. They claimed that these were not their predictions, but those of another user. The glitch was linked to the Oscars prediction widget, launched on Twitter just a few hours earlier, where fans can make their own guesses online.

“We invited fans on Twitter to make and share your #Oscars predictions," they wrote, explaining their error. "A ton of you already have! A brief issue on Twitter made some of yours look like they came from our account. They didn’t." The account also stressed that they did not spoil the winners, adding, "And we’ll reveal our picks on Sunday.”

So no, the Oscars did not predict the Oscars, as meta as that would have been. Even if someone sneaky wanted to spoil the winners on Twitter, they wouldn't have been able to. Oscars voting doesn't end until later today, Feb. 4, so the winners haven't even been locked in yet.

Even though the posted list wasn't the Oscars' official predictions, their "picks" aren't terrible bets. According to E!, some of the Academy's apparent picks included Parasite taking home Best Picture and Sam Mendes winning Best Director for 1917. They also predicted that Joaquin Phoenix would win Best Actor for Joker and Renée Zellweger would be crowned Best Actress for Judy.

Given the accolades each actor and film has received during awards season so far, including Golden Globes, BAFTAs, and SAG Awards, it wouldn't be surprising if the Oscars' fake predictions ended up being very accurate.