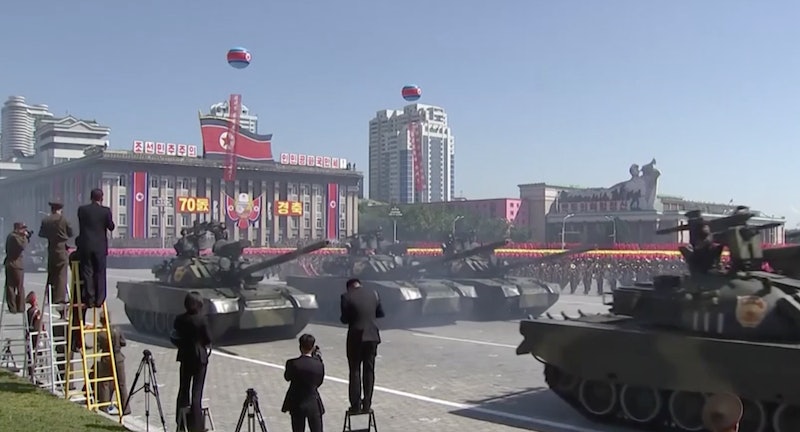 Whether or not Kim Jong-un is actually moving his country towards denuclearization remains to be seen. But intercontinental ballistic missiles (ICBMs) and talk of nukes were absent from North Korea's military parade on Sunday — and President Donald Trump is taking all the credit. He tweeted that he and Kim will "prove everyone wrong."

The country celebrated its 70th birthday on Sunday in Pyongyang with a military parade that was notably understated from years passed. Conspicuously absent were not just the ICBMs but also talk of the country's nuclear weapons program. In the past, military might would be a big focus for the talks at the parade, but this year economic development took center stage.

Hours after foreign correspondents reported these differences, President Trump took to Twitter to note the potential role his meetings with Kim may have had.

"North Korea has just staged their parade, celebrating 70th anniversary of founding, without the customary display of nuclear missiles. Theme was peace and economic development," Trump tweeted. The president also claimed that Fox News commentators said North Korea removing nukes from its parade was an effort to "show President Trump its commitment to denuclearize."

This is a big and very positive statement from North Korea. Thank you to Chairman Kim. We will both prove everyone wrong! There is nothing like good dialogue from two people that like each other! Much better than before I took office.

Kim also reportedly referenced the United States in his comments to the Chinese envoy at the parade, Chinese parliament chief Li Zhanshu.

"North Korea upholds the consensus of the Singapore meeting between the leaders of North Korea and the United States and has taken steps for it and hopes the United States takes corresponding steps, to jointly promote the political resolution process for the peninsula issue," Chinese state television paraphrased Kim as saying, according to Reuters.

To take the place of the ICBMs and nuke talk, the North opted for much more wholesome entertainment. Soldiers marched in uniforms from the past several decades and civilians filled the other half of the parade. North Koreans marched with flowers and flags alongside huge floats — at least one featuring an economic message and many solar panels. "All our might to build economy!" it read.

Kim didn't speak at the event. He watched from a chair high above the crowd with the Chinese envoy. The head of state, Kim Yong Nam, did talk to the crowd, though, and focused on economic issues.

Another event called Mass Games is expected to return, too, to mark the country's anniversary. The event features thousands of North Koreans doing gymnastics and dancing together — all in unison. The last Mass Games was held in 2013 and featured some 100,000 performers. Tourists can pay hundreds of dollars to attend, and the stadium the event is held in can hold 150,000 spectators.

Americans are still banned from visiting the country following the death of Otto Warmbier.

Experts are still cautious about the North's plans to denuclearize. News reports point to Kim's regime rejecting all proposals that the United States has put forward, such as timelines that would move the denuclearization plan forward.

Trump, however, remains optimistic as seen in Sunday's tweets.