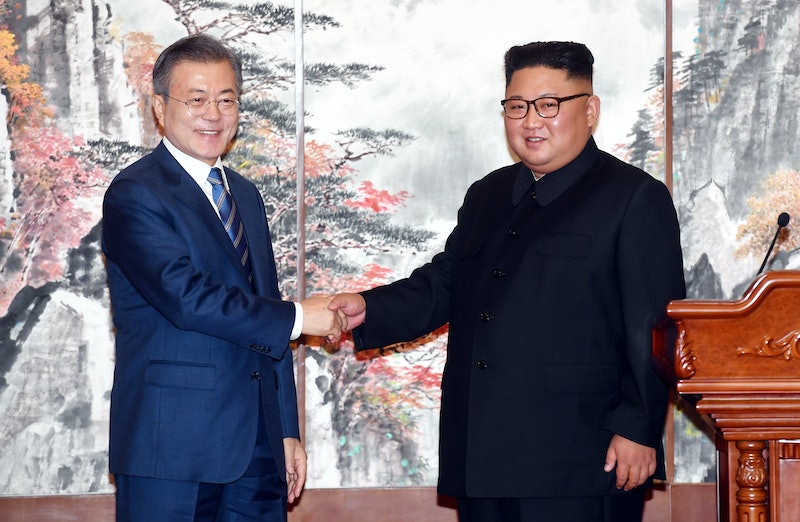 Following a joint summit in Pyongyang, North and South Korea announced a 2032 Olympic bid plan — something which could reflect an unprecedented level of cooperation between two countries. The joint bid agreement came as part of a broader deal between South Korean President Moon Jae-in and North Korean leader Kim Jong Un. In the deal, the leaders agreed to a series of commitments designed to improve Korean relations.

As Bloomberg reported, Moon announced the two countries' intent to make a joint Olympic bid in remarks following the second day of inter-Korean summit meetings. According to the Associated Press (AP), so far neither Kim nor Moon have provided further details about the nature of the bid, including which Korean cities they would want to host the various sporting events. However, as the outlet pointed out, the leaders have plenty of time to make these decisions.

The International Olympic Committee usually announces host cities around seven years before their designated Olympic Games take place, the Associated Press reported. Thus, for a 2032 Summer Olympics bid, North and South Korea should have until around 2025 to hammer out the specifics of their bid. The outlet also reported that several other countries have already expressed interest in hosting the 2032 Games as well, including India, Australia, and Germany.

As News Corp Australia reported, South Korea suggested last week that a joint Olympic bid may be on the discussion table at the then-upcoming summit. As the outlet noted, the South Korean sports minister, Do Jong-hwan, heralded the success of inter-Korean cooperation at the 2018 Winter Olympics in PyeongChang — and expressed hope that similar levels of cooperation could occur in the future. “The PyeongChang Winter Olympics showed the Olympic values very well ... I hope peace in Northeast Asia can continue through sports," Do asserted.

Reuters revealed that, in addition to planning to vie to host the 2032 Games together, Moon and Kim announced that the two countries would "participate jointly" in international athletic competitions in the future. This plan for joint participation includes the 2020 Summer Olympics in Tokyo, Japan.

The two countries made significant cooperation inroads in other areas as well. As USA Today reported, President Moon said that "The South and the North also discussed denuclearization steps for the first time." Moon added that North Korea agreed to permanently close a nuclear missile test site and launch pad — and indicated that it would allow international observers to witness this process.

Moreover, the North revealed that it would agree to additional nuclear concessions if the United States makes certain concessions of its own, as noted by USA Today. The paper also reported that the defense ministers of both countries signed documents committing to reducing military tensions on the Korean peninsula.

As Voice of America (VOA) reported, the three-day summit will likely wrap up with a farewell dinner this evening (local time), followed by a ceremony at the airport in Pyongyang tomorrow as the South Korean delegation departs the country.

It seems that significant progress was made on a host of inter-Korean cooperation issues at the September summit. Many around the world will be watching to see how relations between the two Koreas continue to evolve — and to observe whether the countries do indeed decide to go through with their promise to jointly launch an Olympic bid in the future.