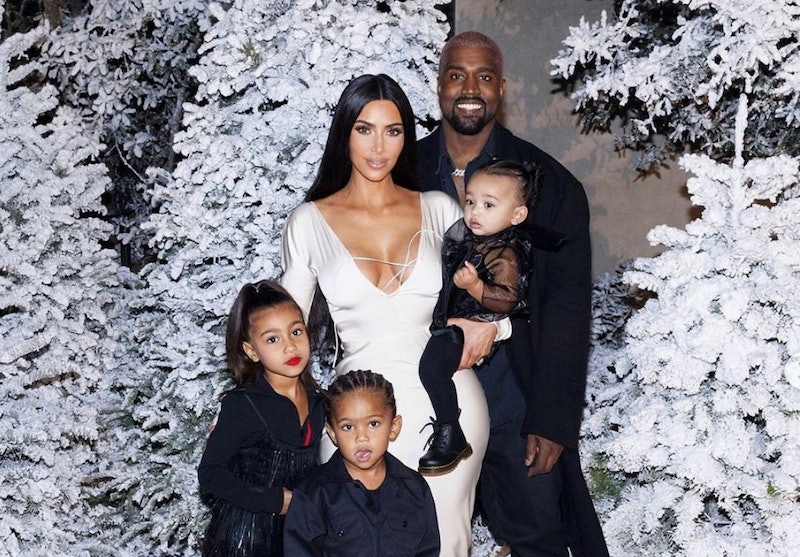 North West has already proven to be a budding makeupista and beauty influencer — and she's not even six years old. North West wore red lipstick in Kim Kardashian's Christmas photo and fans were loving the festive shade. It was bright, blue red matte and it immediately had fans and followers deeming it "iconic" and inquiring further.

Kardashian responded to the chatter on Twitter, telling a fan that "it just might be a new Classic Red Lip I have launch VERY soon."

Whoa! A new KKW Beauty lip product was just hiding in plain social media sight. The shade is a bit of a surprise, though, since KKW herself is known for her nude, glossed lip. She rarely, if ever, rocks a red lip.

Just like her little sister Kylie Jenner tests and swatches Kylie Cosmetics products on her housekeeper's arm and on her BFF Jordyn Woods, Kim K. allowed her adorbs daughter to preview the shade during the family's holiday festivities. Of course Twitter had plenty of opinions about the matter. But the mom-shaming over letting her daughter wear lipstick while engaging in some seasonal merriment was kept to a minimum.

This was just another example of how North has been building her rep as a beautyista. She recently "assisted" her makeup mogul mom in blending foundation and doing a smoky eye.

Kardashian also confessed in a holiday makeup tutorial for Vogue that she knew her eldest daughter got into one of her palettes because she left a dent in one of the shadow pans. North is just like so many other little girls who play with their mom's cosmetics and show an early interest in glam.

North was rocking her red lip. It was a nice pop of color against her monocromatic, all-black ensemble. Followers immediately reacted to the cuteness of the Kimye brood and they were feeling North's look and her confidence.

When a user labeled the red lip as "iconic," Kardashian responded with a hint of information. It sounds like a red lipstick shade is on the way from the KKW Beauty brand. Most of her lippies so far have been nudes and pinks. It's about time that KKW Beauty drops a classic, Old Hollywood, and mega glam red. Notice Kardashian also said "VERY soon." One can only hope the caps lock on "VERY" means a Kim-created red lip is on its way sooner than later.

One user suggested a Valentine's Day drop. That would make complete and total sense.

Kardashian also replied that North selected the shade and with a specific reason.

Some users weighed in, saying Kim K didn't need to justify the decision to let North wear lipstick during the holidays.

This user put things in perspective.

A North-inspired collection would be so fun.

Truth. The customers are calling for it.

Kim allowing North to wear lipstick for the holidays certainly caught has her fans clamoring for her to release this or any red shade. Her daughter is already an ultimate influencer despite being single digits in age.

This is the most recent "red" from the KKW Beauty x Kylie Cosmetics lipstick set. Stay tuned for more.