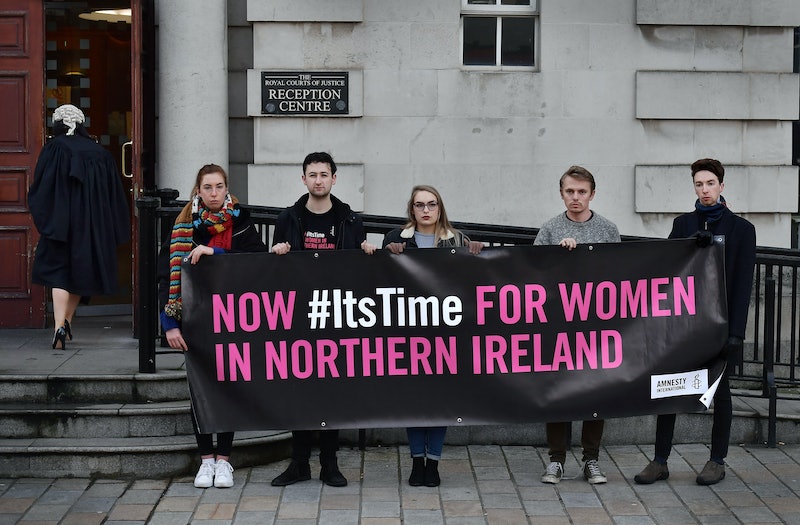 Northern Ireland may officially be part of the UK, but its laws surrounding abortion do not fall in line with England, Scotland, and Wales. Currently, women in Northern Ireland who fall pregnant are required by law to give birth, unless there is a serious risk to their health. Those who want an abortion must travel to another part of the UK or have the procedure illegally. The potential punishment? Life imprisonment. It's clear that Northern Ireland's abortion laws need to be reformed and that's exactly what a new parliamentary report is pushing for.

The Women and Equalities Committee's report was published in response to a 2018 UN report which concluded that the UK was committing "grave and systematic violations" of human rights by allowing such laws to continue. According to the UN, legally forcing women to carry their pregnancy to full term, including "in cases of severe foetal impairment [or when individuals were] victims of rape or incest", is an example of gender-based violence.

But since the UN's official word, nothing has been done to alter the law. This is partly due to Northern Ireland's current political problems. As RightsInfo explains, the nation's own Parliament, Stormont, has been suspended for over two years after conflict between its two main parties. Abortion would typically fall under Stormont's remit, so it's no wonder that little progress has been made.

However, this can no longer be used as an excuse, states the new parliamentary report. It is calling for Westminster to set out a clear timeline that will "address the breaches of women's rights" and for clarification on the legal situation which is currently "creating confusion, fear, and inequality."

In 2017, a scheme allowing women from Northern Ireland to travel to England for a free abortion was introduced, reports the BBC. But the scheme is by no means a perfect solution everyone. Women who can't afford to travel or who are unable to take time off work are still left in the same position. And it's far from ideal to have to travel far away from your home and support network for an abortion.

Doctors in Northern Ireland told the Women and Equalities Committee that they were unsure whether to even refer pregnant patients to the scheme. "We heard of doctors facing a potential conflict between their duty of care to their patients and the law, and between their duty of confidentiality and the law," committee chair Maria Miller said in a statement, adding that guidance on scheme referrals "must be published immediately."

Miller also spoke of the lack of human rights guidance, stating: "Women and girls who are pregnant as a result of rape or incest may face prosecution if they have not reported the offence to the police under Northern Ireland law. The government must address these concerns."

In a statement, Amnesty International’s Northern Ireland campaign manager, Grainne Teggart, said: "Inaction is no longer an option. The UK government cannot remain complicit in the harm caused by the existing abortion regime — the time for change is now." The British Pregnancy Advisory Service is also calling for urgent action, asking people to email their MP and encourage them to make a representation to Northern Ireland's secretary of state, Karen Bradley.

An Amnesty poll carried out in 2018 found that the Northern Irish public are firmly in favour of reform. Abortion should not be a crime, said 65 percent of the nation's adults, while 66 percent agreed that Westminster should take action in the absence of Northern Ireland's own Parliament.

With neighbouring Ireland agreeing to decriminalise abortion in 2018, pressure is mounting for Northern Ireland to do the same. Will the government listen? Only time will tell.