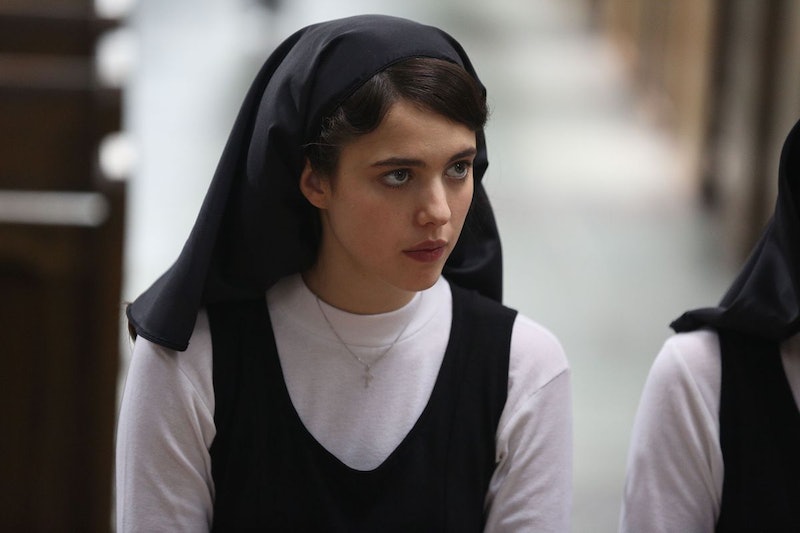 On paper, a movie about 1960s nuns dealing with changes in the Church doesn't exactly sound like a must-see. But Novitiate, a new drama in theaters now, is as compelling as it gets, due to the gripping drama that comes from the convent's residents questioning their faith — and falling for each other — during a time of controversial religious reforms. Despite its very real inspiration (the Second Vatican Council did indeed cause issue for thousands of nuns), Novitiate is not a true story. But the film's themes of faith and sisterhood couldn't ring more true, and star Margaret Qualley knows why.

"In that time period, they were sort of feminists in a way," explains Qualley about the postulates and nuns, speaking over the phone in late October. "In the world in the convent, there was so much sexual repression... [the reforms were] undermining all of these women and all of the work that they put in for their entire lives."

In the film, Qualley plays Cathleen, a watchful 17-year-old who pursues nunhood in part due to her deep faith, and in part due to her desire to leave the chaos of her family's home. Yet while her love for God never wavers, Cathleen's time in the convent does find her struggling to reconcile being a postulant with being celibate and unattached from others. It's a heartbreaking balance, and Qualley says she worked hard to make sure her portrayal of Cathleen was as honest and complex as the young woman's journey.

"I was worried that Kathleen was so perfect that everyone would just find her annoying," Qualley recalls. But, she adds, "each character [in Novitiate] is unique and complicated and has their own specific qualities, but are strong and dedicated and smart and passionate."

To understand the women's mindset as they struggled to acclimate to the strict rules of their new home, Qualley turned to her own background — not in religion, but in dance. Having spent much of her childhood and adolescence in intense ballet training before quitting at age 16, the actor says that being a dancer "shockingly isn’t entirely dissimilar" from being a postulate.

"There’s an insane amount of discipline, and also an overwhelming desire to be perfect," Qualley explains. "And in both ballet and the life of the nun, there are certain steps you can take to make yourself better... I could understand that mindset and so desperately wanting to be perfect or good."

Of course, she adds, "there’s no such thing as perfect and that’s something I think I’ll learn repeatedly for the rest of my life." But even still, having that dance background "was kind of a window into Kathleen’s world," she explains.

For those who know Qualley best as the smart, thoughtful teenager Jill on HBO's acclaimed series The Leftovers, seeing her as Cathleen might come as a surprise. The actor is clearly drawn to actors more outwardly problematic than the nun-in-training; "for me, the more flaws a character has, the easier it is to love them," she explains. Jill certainly had her issues, but as Qualley attests, her attitude made her a fan favorite, so it was disappointing to see her only appear in one episode during the show's final season. "It was just a conflict of dates," Qualley explains now. "It wouldn’t have worked, I wouldn’t have been able to shoot certain things and be in Australia at the same time."

"But I miss them," she adds. "It was honestly so exciting every week getting a new script. It was crazy being a part of something and having no idea where it’s gonna go."

The Leftovers may be over, but luckily fans have Notiviate to check out if they want to see Qualley in another dark, eerie, and totally compelling role.

More like this
On 'The Handmaid’s Tale,' Christine Ko Fights Back
By Gretchen Smail
12 ’90s Movie References You Missed In 'Do Revenge'
By Radhika Menon
Jinkx Monsoon Is About To Get Real Sketchy
By Sam Ramsden
Paul Mescal, Man Of Mystery
By Samantha Leach and Heather Hazzan
Get Even More From Bustle — Sign Up For The Newsletter