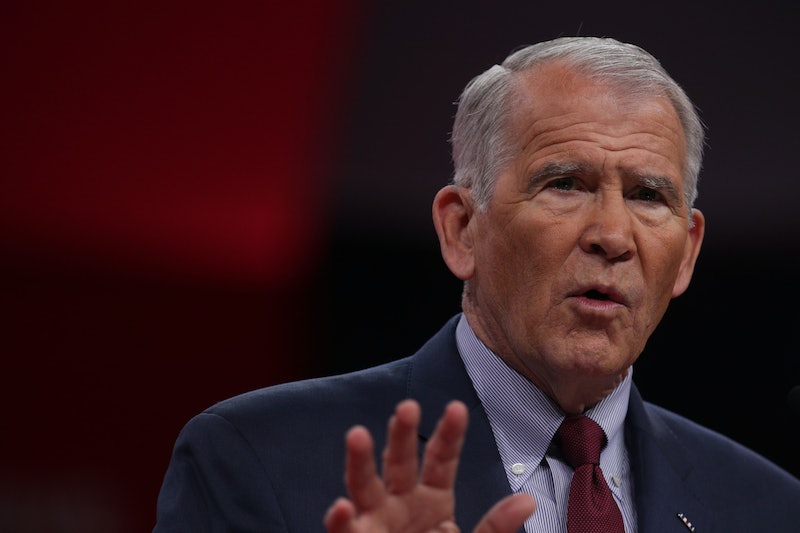 Over the weekend, the president of the National Rifle Association announced that he would not be nominated for a second term, The New York Times reported. And his impending departure appears to be causing a stir. NRA president Oliver North's resignation letter revealed discord within the organization just as the group's finances are facing scrutiny.

“Please know I hoped to be with you today as NRA president endorsed for reelection,” North wrote in his letter, which Richard Childress, a vice president at the NRA, read at the organization's annual meeting, The Washington Post reported. “I’m now informed that will not happen.” North's term as NRA president comes to a close on Monday, according to the Post.

In the letter, North drew attention to the NRA's finances, which he said posed a problem. "There is a clear crisis that needs to be dealt with quickly and responsibly," North wrote, according to The Wall Street Journal. North said that the organization potentially faced issues that could jeopardize the NRA's standing as a nonprofit, per the Journal.

North's resignation announcement comes as New York attorney general Letitia James has launched an investigation into the NRA's finances, including into the group's tax-exempt status, the Times reported. Bustle has reached out to the NRA for comment.

That James is investigating the NRA doesn't come as a complete surprise, per the AP. As a candidate for attorney general, James said that she would look into the organization's "legitimacy."

“I will use the constitutional power as an attorney general to regulate charities, that includes the NRA, to investigate their legitimacy,” James said at a rally last July, per the AP.

North's ouster comes after a fierce internal power struggle, the Times reported. He and others had been working to remove the NRA's chief executive, Wayne LaPierre, per the Times. According to the paper, North asked LaPierre to resign last Wednesday. In response, the next day, LaPierre contended that North had threatened to release negative information about him if he did not step down, per the Times.

On Sunday, it wasn't immediately clear who would assume the gun rights group's presidency following North's departure. But as far as the investigation into the group's finances, one of the NRA's lawyers said the group plans to cooperate fully, the Times reported.

“The NRA will fully cooperate with any inquiry into its finances,” the NRA's outside counsel, William A. Brewer III, said in a statement, according to the newspaper. “The NRA is prepared for this, and has full confidence in its accounting practices and commitment to good governance.”

The NRA's leadership shuffle, as well as the New York investigation, comes as the Republican party gears up to try reelecting President Trump in 2020. The NRA has historically worked closely with Republicans to help elect politicians who oppose enacting gun safety reform. Whether North's ouster will affect the group's work in that realm remains unclear.