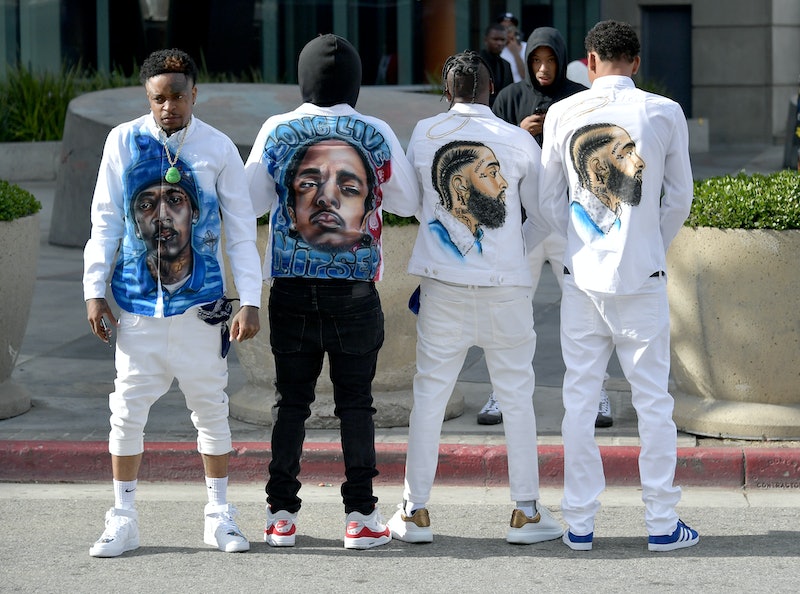 Los Angeles is grieving the death of rapper and activist Nipsey Hussle, who was fatally shot in the city in March. At a memorial service Thursday, a letter from Barack Obama to Hussle's family and loved ones was read aloud, the Associated Press reported, in which the former president praised Hussle for the social justice work and community activism he did in the Los Angeles neighborhood where he was raised.

"I'd never met Nipsey Hussle, but I'd heard some of his music through my daughters, and after his passing, I had the chance to learn more about his transformation and his community work," Obama wrote. "While most folks look at the Crenshaw neighborhood where he grew up and see only gangs, bullets, and despair, Nipsey saw potential. He saw hope. He saw a community that, even through its flaws, taught him to always keep going."

Obama went on to applaud Hussle's decision to "invest in that community rather than ignore it," citing the activist's work establishing Vector 90, a coworking and STEM training space in Crenshaw. Hussle "set an example for young people to follow," Obama said, and that's "a legacy worthy of celebration."

"I hope his memory inspires more good work in Crenshaw and communities like it," Obama wrote.

Thousands of people showed up for Hussle's memorial at the Los Angeles Staples Center on Thursday, NBC News reported. Singers Marsha Ambrosius, Anthony Hamilton, Stevie Wonder and Jhené Aiko were all scheduled to perform at the event, while fellow rappers YG, a frequent collaborator of Hussle's, and Snoop Dogg were also set to make appearances, according to a program obtained by CNN.

Hussle put his name on the map with a series of mixtapes that he released beginning in 2005. In 2013, he put out a mixtape that was free to download but cost $100 per physical copy, Hip Hop DX reports; according to the Atlantic, Jay-Z bought 100 copies. In 2016, Hussle and YG recorded "FDT," and anti-Donald Trump song that became a favorite for liberal protesters after Trump's election, and when Hussle released his long-awaited debut album in 2018, it debuted at No. 4 on the Billboard Top 200, according to the Atlantic, and was nominated for a Grammy.

As his career exploded, Hussle set out to improve the Crenshaw neighborhood he grew up in. Vector 90, which Hussle co-founded with real estate developer David Gross in 2017, is both a coworking space and an incubator for local entrepreneurs, Hussle told Black Enterprise in 2018. It aims to be an entry point of sorts for Crenshaw youth who hope to work in STEM fields, and Silicon Valley in particular, according to the Los Angeles Times.

"In our culture, there's a narrative that says, 'Follow the athletes, follow the entertainers,'" Hussle told the Times. "And that's cool but there should be something that says, 'Follow Elon Musk, follow [Mark] Zuckerberg.’ I think that with me being influential as an artist and young and coming from the inner city, it makes sense for me to be one of the people that's waving that flag."

Obama wasn't the only politician to honor Hussle posthumously. On Wednesday, Rep. Karen Bass delivered an address in the House of Representatives honoring Hussle's philanthropic work that will be entered into the Congressional Record, Ebony reports.