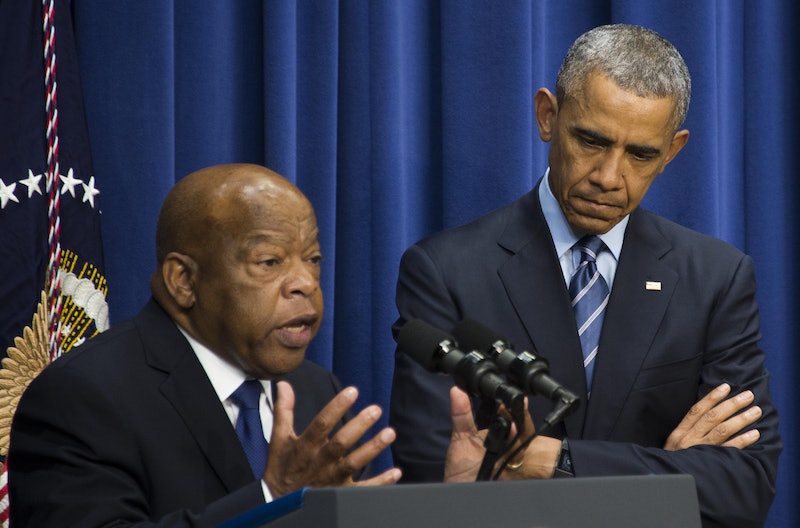 Guess what? The Tweeter in Chief Donald Trump is not only taking on the highest office in the land, but Friday he also gained access to over 13 million new followers on Twitter, increasing his social influence by over half of the reach he has now. But the outgoing president isn't handing over the @POTUS handle without a pointed message: Obama is leaving the POTUS Twitter account with a picture of John Lewis... and it is perfect.

Lewis has had his riffs with the incoming president, going as far as to criticize the legitimacy of Trump's presidency in an interview with Chuck Todd on NBC News: "I don't see this President-elect as a legitimate president. ... I think the Russians participated in helping this man get elected. And they helped destroy the candidacy of Hillary Clinton."

It doesn’t matter how Sen. Sessions may smile, how friendly he may be, how he may speak to you. We need someone who is going to stand up, to speak up, and speak out for the people that need help. For people who have been discriminated against. and it doesn’t matter if they’re black, white, Latino, Asian American, or Native American. Whether they are straight or gay, Muslim, Christian, or Jews. We all live in the same house, the American house. We need someone as attorney general who is going to look out for all of us, not just some of us.

Now, Obama is leveraging Lewis's message and position and a well-respected civil rights game-changer, putting him front and center on the @POTUS Twitter account that he handed down:

At a time when the next president has been proven to consistently marginalize the most vulnerable Americans — from famously kicking off his campaign with the racist sentiment that Mexicans are "rapists" to assigning alt-right champion Steve Bannon as chief White House strategist — the pushback on a president with such outspoken bigoted views comes in all forms.

And the most recent pushback of the Obamas marching hand-in-hand with John Lewis, on the Twitter account that is being handed over to a morally questionable new president speaks volumes. Hopefully the new, tone-deaf president will get the message — but if his history is any indications, the sentiment will likely go over his enormous orange head.