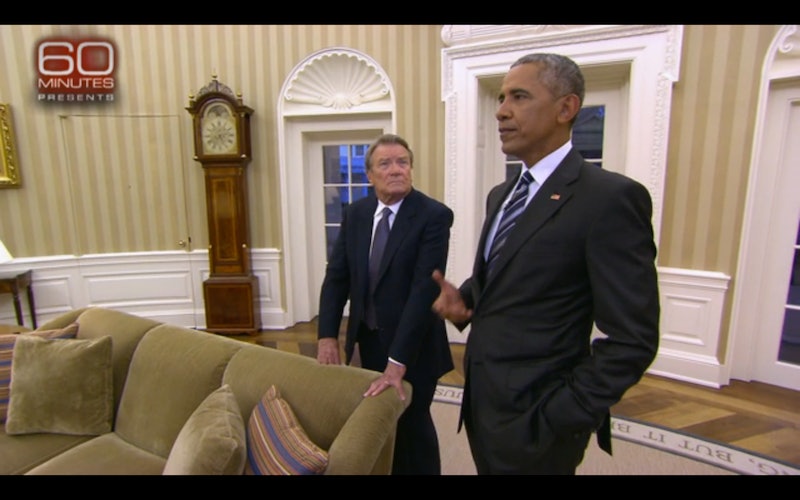 In an interview reflecting on his eight year presidency on Sunday Night, Barack Obama revealed his post-White House plans to 60 Minutes correspondent Steve Kroft. While Obama told Kroft that he certainly had plans to work hard on various issues, he also emphasized that he was more immediately looking forward to some of the more mundane and traditional aspects of life which many of us take for granted, but in which Obama has not had the opportunity to indulge.

These entities include sleeping, self reflection, teaching, and spending time with family, among others. In the interview, Obama directly stated that, post-presidency, he is going to "try to get some sleep." He also asserted that he is "absolutely positive" he is not going to be setting his alarm clock on Jan. 21, the first day of his post-presidency life.

In addition to a desire to get some (likely much-needed) sleep, Obama indicated that he intends to take some time to process his presidency and ruminate. While he does not intend to be sitting at his desk much during his post-presidency life, he does wish to "do a little puttering" because he "hasn't had a lot of chance to reflect and absorb all this."

While discussing his desire for self-reflection and time to process his presidency, Obama also revealed a wish to go back to teaching following the end of his presidential term. As many may recall, Obama previously taught at the University of Chicago Law School for 12 years. According to The New York Times, former students of Obama's characterized him as charismatic and thought-provoking, and he will surely be very welcome back in the classroom, wherever he chooses to pursue a professorship. Obama likewise seems very excited about the prospect, saying during the interview that he "look[s] forward to teaching the occasional class, 'cause I was a professor. And I had fun doing it."

Finally, Obama's 60 Minutes interview also demonstrated how much he is looking forward to having a more "typical" family life. Obama indicated that both his wife and daughters are seemingly very much looking forward to being removed from the White House "bubble" and from constant political scrutiny. Additionally, the outgoing pPresident mentioned that he plans on relishing the extra time he will have with his family post-presidency.

"I'm going to spend time with Michelle," Obama said. "And, you know, we've got some catching up to do. We've both been busy.

It seems that, following the conclusion of his presidency, Obama is going to take some time to rest, reflect, teach, and revel in family life after a very inspiring-but-intense eight years before more fully moving into his next professional goals. Obama's decision to slowly and healthily adjust to post-presidential life is certainly a wise one, and he will undoubtedly be successful in all of his endeavors as an "everyday American."