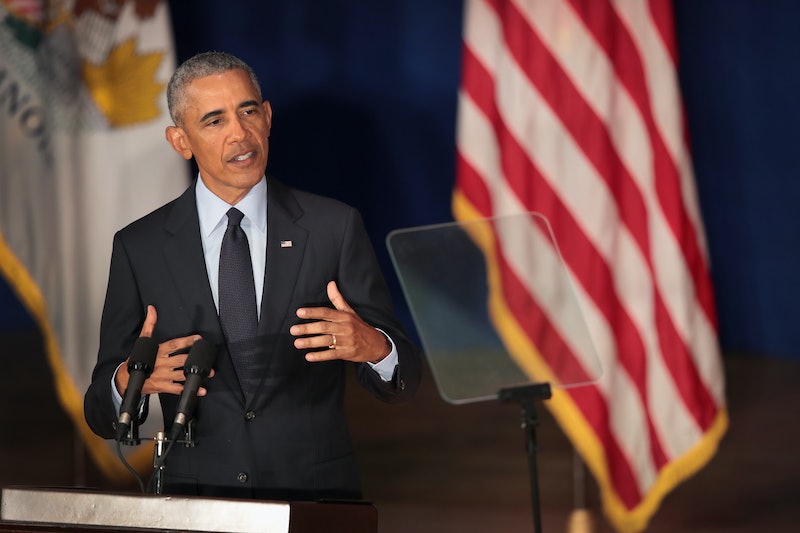 In a speech on Friday at the University of Illinois Urbana-Champaign, President Barack Obama said President Donald Trump's name when discussing anger and division plaguing the country. "He is a symptom, not the cause," Obama said of Trump.

"It did not start with Donald Trump," Obama said, referring to what he called an ongoing "backlash" against progressive reform in the United States. "He is a symptom, not the cause. He's just capitalizing on resentments that politicians have been fanning for years, a fear and anger that's rooted in our past but also borne of the tremendous upheavals that have taken place."

He also seemed to refer to Trump when discussing "demagogues," who "promise simple fixes to complex problems" and "promise to fight for the little guy" while actually helping the rich. Obama argued that such figures "appeal to racial nationalism that's barely veiled — if veiled at all. Sound familiar?"

Obama's comments were notable because they went against what CBC refers to as a "golden rule": Past presidents aren't supposed to criticize the ones who come after them. President Jimmy Carter drew ire for that reason in 2007 when he called President George W. Bush's tenure "the worst in history."

But this is one of those rules that isn't actually treated like it's inviolable. "I love how because of our short memories, we come up with these eternal rules that don't really apply," historian Tim Naftali told The New York Times after the Carter incident. According to The Times, President Gerald R. Ford criticized a successor, as did President Dwight D. Eisenhower, President Richard Nixon, and others.

Obama made it clear that he disapproves of Trump's actions in office, though he's generally vaguer about it. At the late Sen. John McCain's funeral, he and Bush spoke about the necessity of promoting American ideals in what was interpreted as a nod to Trump. Both men made calls for unity and rising above hatred last October that were also thought to be aimed at the president. But as The Times noted then, Obama and Bush had "largely avoided taking on Mr. Trump since he was inaugurated."

Unlike on Friday, Obama didn't use Trump's name in either of those instances. Perhaps this Illinois speech signals that he's shifting to a more direct approach for combating Trump's agenda as he hits the campaign trail ahead of the midterms.

His address in Illinois marked the beginning of those campaign efforts. Obama will speak in California on Saturday to promote Democratic candidates there, and on Thursday he'll do the same in Ohio, according to Bloomberg.

"President Obama hopes to use his standing across the country to help elect Democrats up and down the ballot this fall," his spokesperson told Bloomberg in an email before the Illinois address. She mentioned that he would argue in his speech that "this moment in our country is too perilous for Democratic voters to sit out."

That's exactly what Obama did. "Some of you may think I am exaggerating when I say this election is more important than any I can remember in my lifetime," he said. "But just a glance at recent headlines should tell you that this moment really is different."