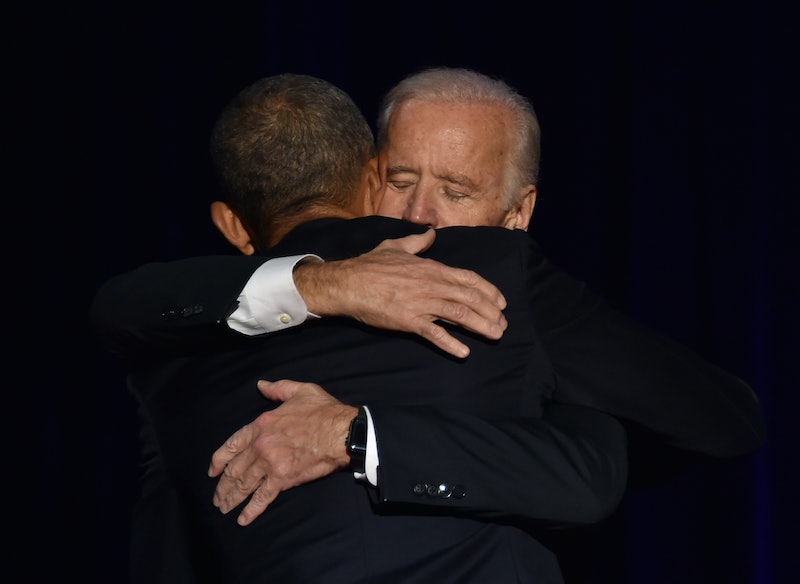 In what appears to have been a surprise to his vice president, Barack Obama made Joe Biden cry Thursday afternoon by bestowing upon him the Presidential Medal of Freedom with Distinction. The president spoke glowingly of Biden at the event, which had been publicized as a tribute to the Vice President, but there had been no mention of the medal being awarded.

"I don't deserve this," Biden said, with tears in his eyes. "But I know it came from the President's heart."

Obama awarded Biden the medal for "faith in your fellow Americans, for your love of country and a lifetime of service that will endure through the generations."

Before surprising the vice president with the award, Obama spoke — often jokingly — about his vice president. "If you can't admire Joe Biden as a person you've got a problem," the president said of his vice present (according to CNN, this was a direct quote from an unnamed Republican senator). "He's as good a man as God ever created."

"Behind the scenes, Joe's candid, honest counsel has made me a better president, and a better commander-in-chief," Obama continued. "And all of this makes him, I believe, the finest vice president we have ever seen. And I also think he has been a lion of American history."

"The best part is, he's nowhere close to finished," the president added.

The relationship between Biden and Obama has been one that has surprised many in the political world. In the early days of the 2008 campaign — when Biden was also running for the Democratic nomination — he drew fire for comments he made about then-Senator Obama.

Obama's selection of the six-term senator as his running mate caught some off-guard, but their working relationship proved to be strong. "By the end of their two terms in the White House, President Obama and Vice President Biden had forged a professional relationship and a personal bond that is deeper and stronger than any president and vice president in the modern era," wrote Paul Kane in The Washington Post.

Indeed, Obama acknowledged the uniqueness of their bond at the beginning of his remarks: "This also gives the internet one last chance to talk about our bromance."

In Biden's remarks following the award, he made it clear that the feeling was mutual. "I've never known a President and few people I've ever met my whole life ... who have had the integrity and the decency and the sense of other people’s needs like you do," Biden said. "I was part of the journey of a remarkable man who did remarkable things for this country."