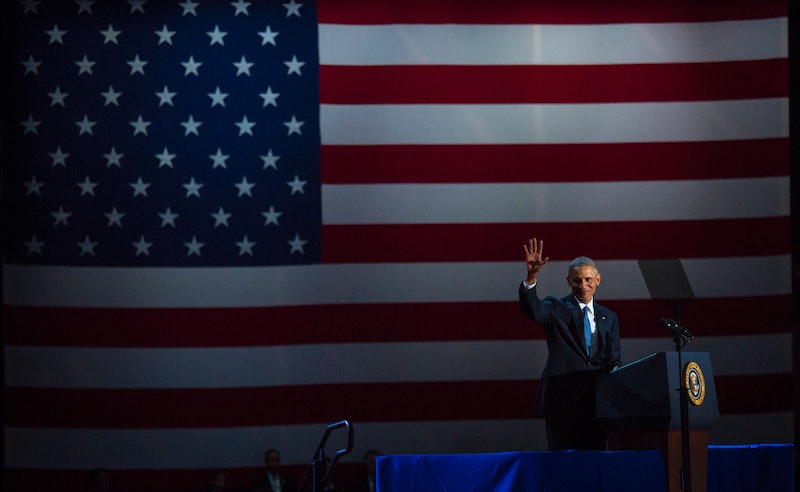 You probably have your own story to tell about how President Barack Obama has made you feel that the country is yours. One of his greatest aspects is his proclivity to inclusivity, no matter who he happens to be including. You many not have noticed this before, but these photos of Obama saying "I love you" in sign language prove his dedication to yet another group: the deaf community.

Deaf activist Nyle DiMarco did everyone the favor of putting these photos out on his Twitter feed, collected, for the whole world to see and enjoy. They're the perfect example of Obama's whole ethos. You probably learned the American Sign Language sign for "I love you" at some point in elementary school, but if you're not deaf, there's a good chance that your eyes just aren't quite tuned to look for it everywhere. If you are, though, this sign from Obama means more than the hearing community can possibly imagine. The deaf community has been marginalized in so many ways, not least of all in terms of being so invisible and forgotten. So to the majority, Obama's tiny hand gesture probably either went totally unnoticed or just looked like a "rock on!" symbol or something. But to the deaf community, it meant something totally different.

For DiMarco and his 193,000 followers on Twitter, this is the president reaching out to yet another group of marginalized Americans. This is yet another minority that Obama has made an effort to reach out to, to speak to in their on language. This is President Obama showing that it doesn't take a lot of work to be an ally — it just takes a simple gesture. In this case, the gestures didn't cost him anything, and they've now brought a moment of happiness to thousands of people.

Inclusivity and an appreciation for diversity in all stripes are America's greatest strengths. Those who don't hold those values have, quite simply, not grasped what it means to be an American. Obama's departure from the presidency is difficult to take for the people who have recognized this about the country, in large part because his replacement has demonstrated that he has no understanding of that concept. As you let the end of Obama's presidency sink in, though, take inspiration from these photos.

Be an ally in your everyday life. Be inclusive. Appreciate diversity; celebrate diversity. Even the littlest gesture, one that costs you so little, could bring a ray of light to someone who's having a difficult time. And for now, just let the pictures of Barack Obama telling you that he loves you in sign language warm your heart.

More like this
Chris Kaba's Family Continue Fight For Justice After Viewing Police Bodycam Footage
By Sophie McEvoy
Women Around The World Are Cutting Their Hair In Solidarity With Mahsa Amini
By Darshita Goyal
An Honest Review of MeUndies Boxers, According To A Non-Binary Person
By Megan Lasher
Androgynous Formal Wear That Will Make You Feel *So* Fancy
By Megan Lasher
Get Even More From Bustle — Sign Up For The Newsletter