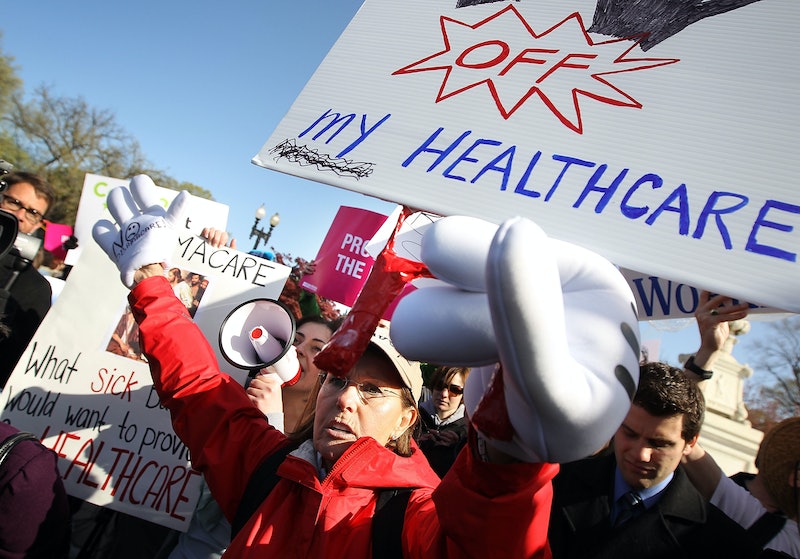 Ever since Donald Trump won the presidency, Republicans have made it clear that one of their top policy priorities is kicking an estimated 20 million Americans off their health insurance plans by gutting the Affordable Care Act. Needless to say, supporters of the law aren't happy, and many Americans are protesting the GOP in various ways. And yet unfortunately, Obamacare repeal protests may fall short of changing any minds in Congress, but there's a way they can work.

By now, you're probably well aware of the various ways to go about protesting the GOP's Obamacare repeal: Call your congressional representatives, sign a petition, attend a protest rally, use the right hashtags on social media, and so on. These are all noble pursuits and valid ways to express your opposition to what Republicans are doing.

And yet unfortunately, there's a pretty strong possibility that none of these methods will work. Yes, America is ostensibly a democracy*, and in a democracy, elected representatives are supposed to respond to the desires of their constituents. Given that only 18 percent of Americans want Obamacare to be fully repealed, stopping the repeal effort should be as simple as making your position known to congress. Right?

In reality, this usually isn't how it works. Lawmakers frequently vote against things that the country widely supports, and vice versa.

For instance, polling in 2013 showed that around 80-90 percent of Americans supported mandatory background checks for firearm purchases at gun stores, gun shows or online. But when legislation mandating such background checks came up for a vote, it only received 54 votes. That's nowhere near 80 percent, let alone 90 percent, of the Senate. More importantly, it was six votes shy of the 60 needed to overcome a Republican filibuster, so the amendment died.

Sure, the filibuster was part of the problem there, but only part of it. In any event, the upshot is the same: The Senate ignored the will of the people, and rejected a piece of legislation that the vast majority of Americans supported.

Nobody knows for sure, but there's reason to believe that the GOP will be similarly unresponsive to Obamacare repeal protests. For much of the Republican Party, opposition to both socialized medicine and anything with the word "Obama" on it is deeply embedded in their genes. That's why the GOP-controlled House voted over 40 times to fully or partially repeal Obamacare, even when those votes had no chance of becoming law.

Furthermore, the GOP has been promising to repeal Obamacare in every election since 2010. Reneging on that pledge would infuriate many of the party's constituents, as it would genuinely be a major flip-flop on an extremely high-profile issue.

When a party is this single-mindedly devoted to repealing a law, they're probably not going to let things like petitions and phone calls get in their way. That's not to say that making your voice heard to your representative is a waste of time, but the chances that doing so will save the law are probably slim.

It might sound nuts. And it's a completely speculative idea, because nobody has any idea how Trump will rule once he's in the Oval Office. But any Obamacare repeal effort has to go through Trump, and so far, it's not clear that Trump truly opposes the law — at least, not in the way other Republicans in Washington do.

In addition to this, Trump is a man with a seemingly pathological desire to be liked. Collectively, all of that suggests that he would be more amenable to protests against Obamacare repeal than his Republican counterparts in Congress.

Again, all of this is super speculative. But if you're going to protest Obamacare repeal, it may be best to appeal to Trump directly once he's in the White House — or at the very least, make it clear that you're going to hold him responsible for whatever Republicans in Congress do with the law.

*Except not really, because of the electoral college. Also, the filibuster. Also, gerrymandering. Also, voter suppression.